Pat Sabatini Is On The Hunt

After Securing A Win In His UFC Debut, Pat Sabatini Is Hungry To Keep The Ball Rolling At UFC Fight Night: Barboza vs Chikadze
By E. Spencer Kyte, on Twitter @SpencerKyte • Aug. 23, 2021

Sitting at his media availability following his debut win in April, Pat Sabatini said he was happy to have his first UFC fight over and done with.

“You’re going from fighting on the regional scene and you have so many more fans — and I think that was the first card with fans since the whole COVID thing — so it was a huge card, a lot of pressure, a super-tough opponent,” explained the 30-year-old featherweight, who makes his second appearance in the Octagon this weekend against Jamall Emmers. “I wanted to get that first one out of the way from a mental perspective.”

If you know the road Sabatini has traveled to arrive on the biggest stage in the sport, you can likely understand why the battle-tested Pennsylvania native was so eager to just get his debut in the books and start focusing on the next opportunity.

A pro since 2014, Sabatini earned his stripes on the torturous East Coast regional circuit, building an 11-2 record competing primarily under the Cage Fighting Fury Championship (CFFC) banner, winning the title with a first-round submission win over John De Jesus and successfully defending it four times before his career trajectory took a sharp right turn.

Following his fight in May 2019, four different fights fell apart before hitting the cage, resulting in Sabatini stepping in and defending his title against James Gonzalez on February 1, 2020. Early in the fight, Gonzalez locked onto a modified armbar and Sabatini refused to tap, but when he finally extricated himself from Gonzalez’s clutches, his right arm was stuck at a 90-degree angle.

He was back in the cage seven months later and reclaimed his title with a victory over Jesse Stirn in mid-December, pushing his record to 13-3 in the process. Happy to be back at the top of the heap, the talented featherweight admits there was a time where he questioned whether he would ever get that call from the UFC. 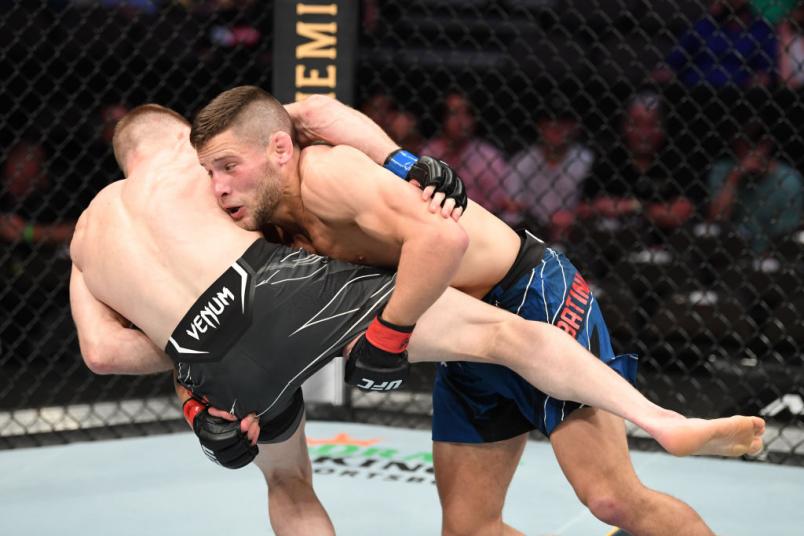 “There was a point where I was like, ‘What have I got to do? I want to get out there,’” recalled Sabatini, who defeated current UFC bantamweight Tony Gravely in his fourth pro fight and had his initial UFC debut called off when his opponent, Rafael Alves, missed weight by a country mile. “A lot of fights were falling through for me and it was definitely a tough time.

“Once I started thinking more in the present moment, not looking too far forward into the future, that’s when things aligned for me.”

RELATED: See What Sabatini Had To Say After Defeating Tristan Connelly At UFC 261

After missing out on the Alves fight, Sabatini was quickly re-booked against Canadian veteran Tristan Connelly, using his grappling to secure a clean sweep of the scorecards and make his UFC debut a winning one. Now he’s set to step in against Emmers, who pushed headliner Giga Chikadze hard in a split decision loss before getting into the win column with a victory over Vince Cachero in his own sophomore appearance inside the Octagon.

“I’ll be honest with you: I couldn’t care less who is in front of me,” said Sabatini, simply stating his truth, not slandering his opponent in any way. “I just care about performing, honestly. I don’t think deep into things; I just focus on myself.

It’s a smart approach, both long-term and in the here-and-now, where injuries, illnesses, and travel issues have become an all-too-familiar feature of fight week, leading to training camps focused on specific opponents resulting in a showdown with someone completely different.

But it’s also a function of Sabatini’s path to the UFC and the people he’s surrounded himself with on the journey. 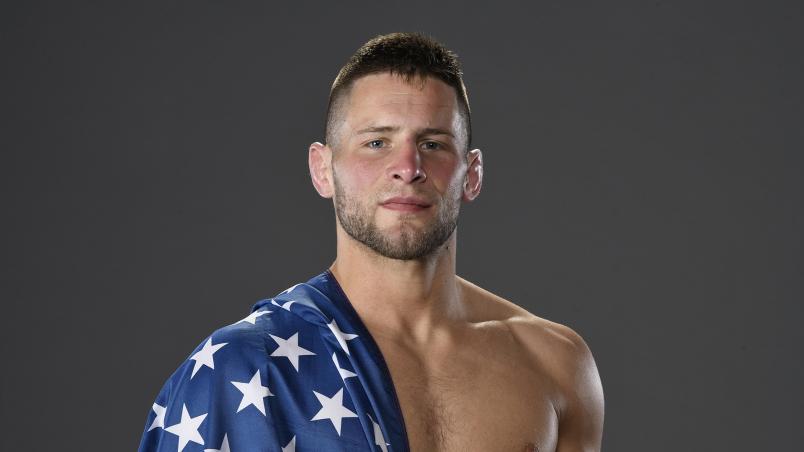 Like everyone else that has competed regularly on the rugged East Coast circuit, Sabatini sees the collection of organizations led by CFFC as the best in the country, and the ultimate proving ground for anyone looking to prepare themselves for competing at the next level.

“It is definitely — in my opinion, in a lot of peoples’ opinions, and honestly, in reality — the gold standard of regional MMA,” he said, echoing sentiments shared by fellow alums like Bill Algeo and Kyle Daukaus. “It’s run super-professional, and the talent pool is getting better and better, show-by-show.

“Victory and the glory of winning would be absolutely nothing without having tasted the hard-fought battles, the hard challenges, and overcoming things. I think CFFC was the perfect promotion where there was never an easy fight; everyone tested me. It was definitely the best place to develop to where I am now.”

He feels the same way about the team he works with as well.

“I trust John, I trust Daniel, and I trust Erik (Purcell), and if they say, ‘Let’s go,’ it’s time to go. I couldn’t ask for a better coaching staff, for better guidance; they’re my boys and if I have them in my corner, I’ll fight anybody.”

He also draws a great deal of inspiration and motivation from one of his long-time training partners and friends — unbeaten welterweight rising star Sean Brady.

“Sean is an awesome dude,” he said of Brady, who was scheduled to face Kevin Lee in Saturday’s co-main event before being sidelined with a foot injury. “I’ve known him for a real long time, and his work ethic is unmatched. 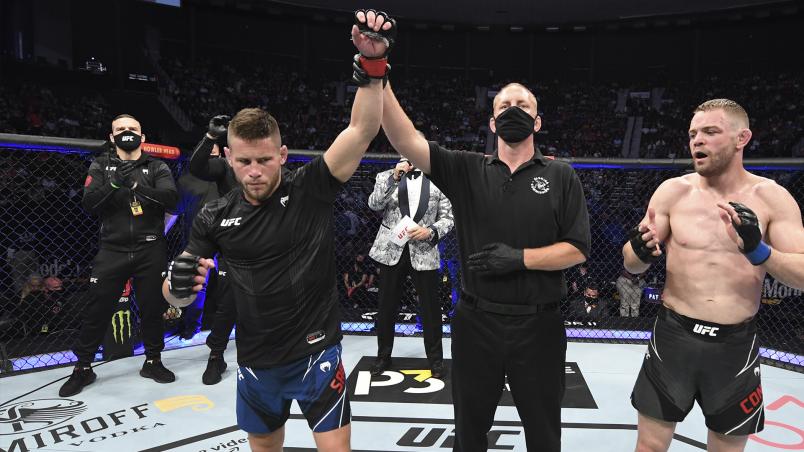 Pat Sabatini reacts after defeating Tristan Connelly in their featherweight bout during the UFC 261 event at VyStar Veterans Memorial Arena on April 24, 2021 in Jacksonville, Florida. (Photo by Josh Hedges/Zuffa LLC)

“Anyone who wants to be successful in this sport, he’s a great person to look up to — from his style to his work ethic, the way he approaches fights; that’s the way it’s supposed to be done.”

With the first one out of the way, the new butterflies dealt with, and another full camp in the books, Sabatini is eager to get back out there and continue this next phase of his mixed martial arts journey.

Watch The Latest Episode Of Dana White Lookin' For A Fight

“I feel like my confidence has definitely gone up since the last fight,” he said. “I realize that I’m never going to be a finished product — there is always going to be something to work on — and that will always motivate me to work hard to look at areas that need work, that need more development. I’ve just got to stay disciplined, train hard, and go in there and go put everything on the line.

“I’m going to embrace the toughest fight, but I’m ready to bring it,” he added in regards to Saturday’s fight with Emmers. “I’m going to be hunting for that finish.”