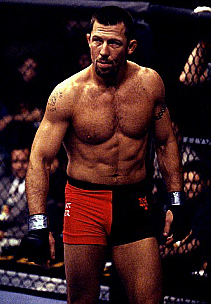 There’s no denying the impact Pat Miletich has had on the sport of mixed martial arts.  A former UFC welterweight champion who also led Matt Hughes, Jens Pulver, and Tim Sylvia to world titles as a coach, he is one of the sport’s pioneers, in and out of the Octagon, and today at the UFC Fan Expo in Las Vegas, he will become the newest member of the UFC Hall of Fame.

So what was his secret? He always believed that his success could be boiled down to one thing: hard work.

“If you’re not willing to make your training harder than your fight ever could be, then you’re not going to end up at the top,” said Miletich.  “There’s a lot of times in my training when I’m ready to puke, and I’m ready to walk right out of the room, but you’ve just got to keep going.  I think that makes a difference, so you don’t mentally fold.”

Involved in combat sports since he was a child, first in wrestling, then boxing and kickboxing, Miletich had the work ethic to outperform more naturally gifted competitors, and he also had a keen eye for what was happening on the mat or in the ring.

“I wrestled from the time I was in kindergarten through college and I watched how different coaches had coached in all those different aspects of sports.  I took the good aspects of coaching that I liked, because there were coaches that couldn’t convey to me correctly the information that they were trying to get through my head, and there were other coaches that were really good at it.  I just kind of modeled myself after them, and tried to explain myself (to my own fighters) so that they could understand.”

Eventually, Miletich sought an opportunity to put his wits and his fists to use in the budding sport of mixed martial arts and teamed up with Mark Hansen to get started in the gym.

“He was ranked in the top ten among heavyweights in the world, and was a Davenport police officer,” said Miletich of Hansen. “He and I were training partners for two, three years at least by ourselves before things got rolling.  That was actually the first guy.  He was a very dominant fighter and a really powerful guy, an All-American lineman at Northern Iowa.”

On October 28, 1995, Miletich made his pro MMA debut with three wins in one night in a Chicago tournament. He continued to build his resume and his fight game on the Illinois / Iowa circuit, going 17-1-1 with the only loss coming against fellow MMA mastermind Matt Hume.

Then the UFC called, and on March 13, 1998, he defeated Townsend Saunders and old rival Chris Brennan (they had fought twice previously) to win the UFC 16 tournament. Seven months later, Miletich was back, this time to fight for the UFC’s first lightweight (later converted to welterweight) title. In the opposite corner was scrappy Mikey Burnett, and Miletich eked out a 21 minute split decision to earn the championship belt.

Miletich successfully defended his belt four times over the next two years, defeating Jorge Patino, Andre Pederneiras, John Alessio, and Kenichi Yamamoto, while battling an even tougher foe in the gym – a laundry list of mounting injuries.

Finally, in May of 2001, the longtime champion surrendered his belt to Carlos Newton via submission in what was a shocking upset at the time. Less than two months later though, Miletich was back, knocking out Shonie Carter with a head kick at UFC 32. A rematch with Newton would not be in the cards though, as Miletich’s charge, Hughes, seized the belt from “The Ronin” at UFC 34.

“The Croatian Sensation” moved up to middleweight for his next bout, at UFC 36 in 2002, but he was stopped by Matt Lindland and took a break from the game to heal his injuries and focus on his gym, which was occupied at one time or another by such standouts as Hughes, Pulver, Sylvia, Jeremy Horn, Robbie Lawler, Drew McFedries, Spencer Fisher, Josh Neer, Ben Rothwell, Bart Palaszewski, Mike Ciesnolevicz, Rory Markham, Tony Fryklund, and Jason Black.

His philosophy in building his team and his Miletich Fighting Systems approach to MMA was a simple one at first.

“Even before I won a UFC title I wanted to train people and get people as good as possible as fast as possible,” he said.  “One, so I’d have good workout partners, and two, because I knew that I wouldn’t fight forever and I wanted to develop my coaching skills.”

Mission accomplished on both fronts. Miletich’s gym became a home for the best of the best in MMA, and there was no room there for egos or primadonnas. If folks like that did show up, they got weeded out.

“There were guys who came out here and didn’t understand that mode, and they didn’t last.  They weren’t around for the teammates when they were training and they really didn’t put the time in for themselves either,” he said.  “To be quite frank, they didn’t survive.  That’s fine because we only want guys who are going to put the work in and that are going to put the work in for their teammates also.”

Wednesday sparring nights usually did the trick to separate the men from the boys as well.
“It was amazing to wake up on Wednesday morning and have that much excitement about Wednesday night,” Miletich told me before the UFC’s 20th Anniversary last November. “Right when your eyes open, you smile and go ‘ha, ha, ha, this is my favorite day of the week.’”

If you’ve talked to Miletich or any of his team, the stories from those Wednesdays have taken on an almost-mythical status over the years, with tales of fighters showing up, getting some tough love in sparring sessions, and then leaving without a word, never to return.

“That happened more than one time,” said Miletich. “We actually had a guy who was from a production company that wanted to do a reality show at our gym, and they sent one of the producer’s sons, who was a linebacker at Penn State, and he came in to start training with us. And actually, everybody went easy on him. I said let’s not kill the guy, he’s the son of the producer, and they just wanted to come in and kind of film things, write some notes, and get some more ideas on how to develop the show. And after the first session, this is a Division I linebacker, a rough, strong guy, and he left a note on the door of the gym and said ‘goodbye, I can’t deal with this, this is insane.’ Basically, he even put in the note that he was questioning his manhood. And nobody tried to hurt him, that’s the thing.”

But it wasn’t all brawn in the gym, as Miletich was a scientist of the sport, one of the first wave of true mixed martial artists who knew that those with just one discipline would soon be weeded out of the evolving sport.

“I had been involved in wrestling, boxing and Muay Thai kickboxing for years,” he said. “I wrestled from the time I was in kindergarten through college and I watched how different coaches had coached in all those different aspects of sports.  I took the good aspects of coaching that I liked, because there were coaches that couldn’t convey to me correctly the information that they were trying to get through my head, and there were other coaches that were really good at it.  I just kind of modeled myself after them, and tried to explain myself so that they (his fighters) could understand.  I think what helped me also is because I learned from so many different people in so many different fighting styles, I could look at it from a wrestler’s point of view because I had wrestled; I could look at it from a striker’s point of view, and I could explain it from their eyes so they would understand it.”

While leading his team to victory after victory, Miletich the fighter attempted comebacks in 2006 and 2008, losing to Renzo Gracie and then knocking out Thomas Denny, and while his spirit was willing to continue, the injuries that still plagued him said no more. He hasn’t disappeared from the MMA scene though, as he still provides expert commentary for various events on television, and he remains a tireless advocate for the sport and its fighters. Now, at 48, he can add UFC Hall of Famer to his list of accolades.

Parts of this piece were adapted from the UFC Encyclopedia, 1st edition, by Thomas Gerbasi, as well as past interviews conducted by the author.