"I just have to get back to the way I used to fight, the Strikeforce days." - Pat Healy 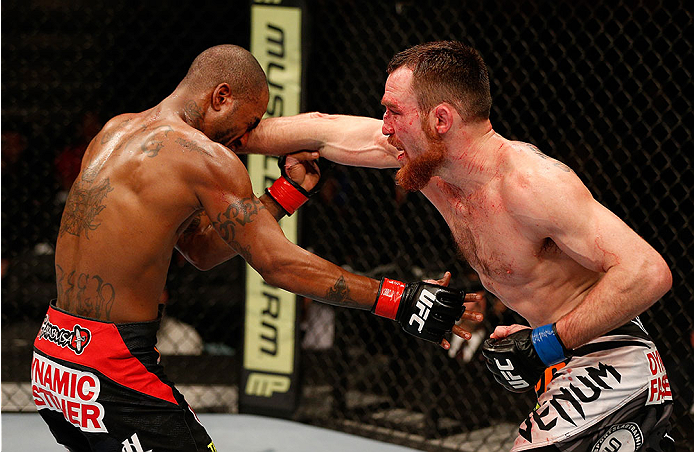 At six feet tall, Pat Healy is used to being the big guy in the cage since dropping to lightweight from welterweight four years ago.

And while he will still be the taller fighter against Gleison Tibau at UFC Fight Night: Cerrone vs Miller on July 16th at Atlantic City’s Revel Casino Hotel, the two men will be on par when it comes to weight and strength.

“He’s definitely as big as I am,” said Healy. “He’s a big, muscular guy. I’m a little taller but he’s going to be one of the biggest guys I’ve ever faced at this weight class.”

Tibau is a big, strong lightweight, with knockout power in both hands, and as a black belt, he has excellent Brazilian Jiu-Jitsu coming out of American Top Team in Coconut Creek, Florida, where he trains with Marcos “Parrumpinha” da Matta, a BJJ world champion.

But Healy, hailing from Oregon, is a great wrestler who has been working on his BJJ in camp with “some pretty big guys who specialize in jiu-jitsu.

“I obviously want to keep this fight on the feet,” he said, “but if it does go to the mat, I have been working hard on submissions, and as a wrestler I am always confident that I can get into some good positions to do some damage. I definitely do not want to be on the bottom of Gleison. He’s really good with his top game and he can also ground and pound pretty well from there.”

Healy isn’t too concerned about a current three-fight slide, at least not outwardly, but he is sure this is an important fight in terms of where he stands in the division. As for Tibau, he’s coming off a second round TKO loss to Michael Johnson at UFC 168.

“I want to make a run at the title, and a win over Tibau is the start down that path,” Healy said. “Of course last time I fought in New Jersey I had some issues,” he said, referring to his submission win over Jim Miller being ruled a no contest after testing positive for marijuana following the event.

The no contest against Miller may have had a broad impact on “Bam Bam.” Not only was he hit with a sizeable fine for the impropriety, he dropped his next three fights via unanimous decision to Khabib Nurmagomedov, Bobby Green and Jorge Masvidal.

“I just have to get back to the way I used to fight, the Strikeforce days,” he said. “I tried to adjust my fighting style, trying to correct things in my fight game, but that led me to change the way I approach my fights. I can make adjustments and keep improving without changing it up too much now, and I’m ready to put it all together.”

It’s a familiar song from so many fighters who either change camps or swap a stand and bang style for a more conservative approach. Miguel Torres, Roger Huerta and Clay Guida come to mind. Each opted to change game plans and suffered a few losses during the incubation period before bouncing back with wins.

“It’s never easy to dissect one’s own game and make changes, but it’s necessary in this sport, which is constantly evolving,” said Healy. “You have to keep learning and keep improving all the time.”

It’s been a rough UFC return for Healy (he first appeared at UFC Fight Night 6 in 2006), who was twice scheduled to fight for the Strikeforce lightweight belt against champion Gilbert Melendez before both fights were scrapped due to injury to the champ.

“It’s just a matter of time,” he said. “I need a win against Tibau and that’s what I’m focused on,” he said.

Part of that focus has been on strength and conditioning.

“It’s no secret that Gleison doesn’t like going into the second and third rounds cardio wise,” says Healy. “I’ve always been a slow starter in all my fights, so I start coming alive in the later rounds, so part of the game plan is to take Tibau deep and wear him down. I am going to mix it up with a lot of stand-up, transitions to takedowns and ground and pound. That’s the plan anyway.”