Read on for the latest installment in UFC.com's weekly series of articles on proper nutrition from the biggest names in mixed martial arts...this week, Pat Barry 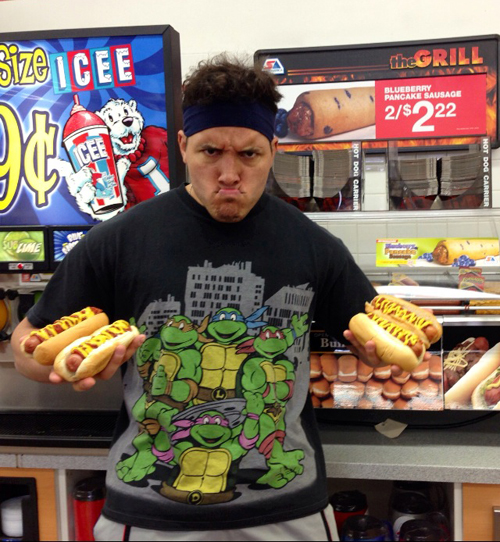 In the cage, Pat Barry has fashioned a 7-5 record. At the dinner table, however, the UFC heavyweight is virtually unbeaten. Broach the subject of food around the Louisiana native and brace yourself for an earful. When the 33-year-old talks food, his pupils dilate, his speech accelerates and his voice rises. His approach to diet: There are no rules. Barry eats vegan a lot of the time, but spontaneously hits up fast food drive-thrus and pizza joints regularly, too. We caught up with the loquacious wonder and quickly determined that no heaping plate of food, no all-you-can-eat buffet, is safe around this man.

A TYPICAL DAY OF EATING IS …

Barry: My mom will make a turkey roaster of spaghetti, freeze it and then (send it) overnight to me in Minneapolis.

My diet hasn’t necessarily changed since I’ve become a pro fighter; my diet has changed since I’ve gotten older and become more aware of my body. Now, my wife and I cook a lot. But we are both not opposed to stopping at a drive-thru on the way home to get cheeseburgers from McDonald’s. I know it’s not for everybody, but personally, eating makes me happy. And when I’m happy I’m DANGEROUS.

PERKS OF BEING A HEAVYWEIGHT

I eat whatever I want. That doesn’t mean that I eat garbage all of the time. My wife and I do cook a lot and eat clean a lot, we take care of ourselves, but we are not opposed to stopping by Taco Bell like we did yesterday. Oh my God we spent $21 at Taco Bell. We ordered two Mexican pizzas and four beef meximelts.

I’M ASSUMING YOU ATE THE MAJORITY OF THAT …

Yeah, I did, but my wife has a ridiculous appetite. That’s part of how we got together. The first time I saw her eat … it was one of the things that attracted me to her, because I could finally eat however I wanted to.

The upside of being a heavyweight is that I don’t have to weigh my food when I eat it or restrict myself. I can eat whatever I want. I’ve always been a firm believer in, ‘Eat whatever you want but only if you’re willing to train that much harder.’

We make Beet soup. It’s a Lithuanian dish – my wife is Lithuanian. Beet soup is all vegetables and broth. It is outrageously delicious. We call it ‘mush.’ We blend broccoli, carrots and cauliflower and then pour Thai chili sauce on top of it, which makes it like a cream. We put that over rice and that right there is a spectacular dish.

We also eat a lot of Vietnamese Beef Pho (wife gets shrimp), which is probably one of the greatest flavors I’ve ever put in my mouth EVER. It’s like an addiction; we can’t stop. We probably eat that maybe four times a week.

I also eat a lot of oatmeal and clean vegetable dishes. When we cook we don’t cook any type of animal products. It’s almost like we are vegans. But we’re not opposed to hitting a fast food drive-thru, or ordering a pizza or getting a sandwich at Jimmy John’s.

Right around 235, 240 pounds. That’s the weight where I can last the longest (cardio) and have the most strength. When I’m 245, I can hit really hard but I might not necessarily be able to fight 25 minutes. And when I’m 230, I can last all day and night but I’m not necessarily the strongest dude in the world. You know?

When it comes down to it, I don’t know hardly anything about diet and nutrition. So I keep it simple.

I’m from New Orleans, Louisiana. I come from a heavy Cajun background – red beans and rice, shrimp, gumbo, crawfish. Meatballs and spaghetti was like our Number 1 dish because it was CHEAP and it was EASY. Mom was a single mother of two kids and she worked a lot. As a matter of fact, meatballs and spaghetti and my mom’s tuna fish were easy meals for her to make, they were cheap, and it was something that would last a long time and she could make a lot for a small price.

So I’ve been eating meatballs and spaghetti my whole life and my mom’s spectacular tuna fish for all of my life. But, at the same time, every once in a while we would have holidays … and I would have Road Runner’s pizza delivered to my house… woooh!!!

I learned how to scramble eggs, so I would make scrambled eggs sandwiches for my brother and I when I was really young.

Pizza. Any kind, it doesn’t matter. Even if it’s the really, leathery, crunchy one that they sell at the gas station and has been sitting there for years. The pizza jerky? Doesn’t matter. If it’s pizza, I love it. I probably eat pizza once a week.

HOW MUCH PIZZA CAN YOU EAT IN ONE SITTING?

Probably 12 slices, which is one and a half large pizzas.

Nothing scheduled yet. I’m healthy, ready to go and would like to fight before the end of the year.

Hey man, that could definitely happen. Maybe I could just somehow become a food critic. Barry vs. Food. I could do that for sure. I watch “Man vs. Food” all the time, that’s a great show. And I’m sitting there all the time going, ‘Man, I could do that.”