"I come in and I have an art that I’m really good at, and I have the ability to make memorable fights, even the ones I lose." - Pat Barry, 2012 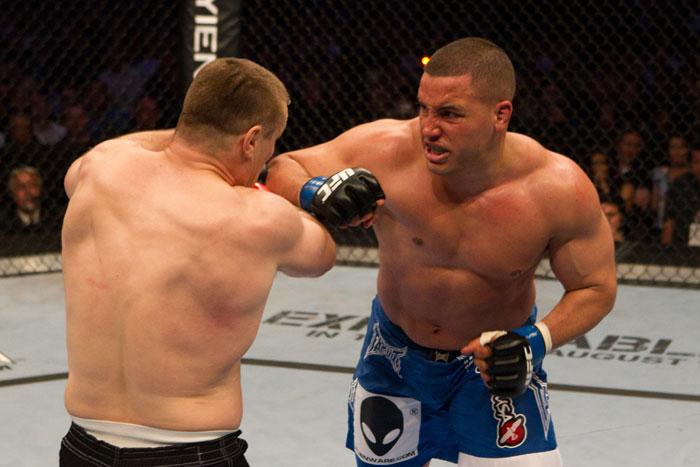 I could write a bunch of things about Pat Barry’s Tuesday announcement that he was walking away indefinitely from mixed martial arts, and I will, but not surprisingly, the best assessment of the Louisiana heavyweight’s fighting career comes from Barry himself.

“I’ve been a performer since Day One, I’ve been a performer since birth,” said Barry in a 2012 interview. “That’s what I’ve always wanted to do, just perform. It just so happens that this is my stage. I come in and I have an art that I’m really good at, and I have the ability to make memorable fights, even the ones I lose. Win or lose, you’re gonna know you just watched something and you’re gonna remember it.”

You can’t put it too much better than that. Sure, he leaves with an 8-7 pro MMA record, but if you saw any of his 12 UFC bouts, you likely didn’t forget it. Barry approached his career with a mix of confidence and humility, something few can pull off. He was self-effacing and brutally honest, but at the same time, he was a guy who said without hesitation that getting kicked in the leg by him was like stepping on a land mine.

Barry’s first UFC opponent, Dan Evensen, probably wouldn’t dispute that statement, getting stopped by the former pro kickboxing standout via leg kicks at UFC 92 in December of 2008. It was Barry’s third such win by that method, and while he didn’t pick up Knockout of the Night honors for that win, two KOTN awards would follow against Antoni Hardonk and Shane del Rosario, and Barry also added Fight of the Night wins over Hardonk and Christian Morecraft.

And those were just the ones that put a bonus check in Barry’s pocket. His battles with Mirko Cro Cop and Stefan Struve were also ones to remember, and who could ever forget his 2011 fight with Cheick Kongo, which contained perhaps the most hellacious reversal of fortune ever seen in the Octagon. Seconds away from knocking Kongo out in the first round, the Frenchman miraculously came back, catching Barry and finishing him seconds after being dropped to the canvas.

“That’s the name of the game,” he told me after the bout. “We’re gonna knock people out and we’re gonna get knocked out, there’s no avoiding that part of it. I was lucky enough to go a really long time without ever having to come across it, but if you can’t accept getting knocked out or losing or getting hit, then this is the wrong sport to be in.”

Yeah, it was a loss, but it was also a fight that stuck with you forever, and Barry was willing to accept the defeat if it meant he left it all in the Octagon and gave the fans a show. And that’s probably the most lasting memory Barry will leave, that of being a man of the people. Whether it was on social media, on fight week, or at meet and greets, “HD” wouldn’t leave until everyone who wanted a picture, handshake, or autograph got one. During autograph signings for the UFC Encyclopedia at the promotion’s Fan Expo, Barry showed up on his own time and spent time putting his John Hancock on the books, taking photos, and talking with his fans. And it was like they weren’t fans to Barry, but friends.

One of my favorite stories from such a session was when a little girl shyly approached the heavyweight standout and asked for an autograph. He agreed, but only after she fulfilled his request:

“I want your autograph first.”

The smile that resulted lit up the room, and for Barry, that was worth more than any win. That line of thinking came from his mom, Laverne Barry Fleming.

“That’s one hundred percent from my mother,” he said. “That is my mother’s trait and her entire life was dedicated to just giving. My father also, but I definitely get this from my mother. She just gives to the world. We were raised that if you give to the world, the world will give back to you. She would roll over in the mud just to make sure you wouldn’t have to walk in it. Her entire life, she’s just taken care of everybody.”

She is probably very proud of her son, not just for knowing when it was time to walk away, but for leaving such a positive impression on everyone who met him. For Barry, there was never any other way to be.

“Deep down inside, something can tell you when someone is lying or acting,” he said. “You can tell that you’re watching a movie, versus in real life, when someone is pouring their heart out to you, you can feel that and sense that. Like going to an opera, there are women and men who stand on stage and they sing and they can command tears from the crowd watching. I never understood that growing up as a kid. How can people go to an opera and watch someone singing and start crying – that just doesn’t make sense. Or you can listen to someone who plays the trumpet or plays the saxophone in a way that can actually pull tears out of your head. I think that it’s definitely my honesty and my realism that connects to people because I’m not a superhuman. I’m just like everybody else. I think people can relate to me and it makes them feel special because if that guy over there can do this, then I can do it too because he goes what we go through every day and he sounds very familiar to me. I’m your average, everyday guy. I just happen to have an odd job.”

It was a job well done. And while we won’t be seeing him in the UFC Octagon, in a statement released by his manager Brian Butler, Barry says that this is probably not the last time we’ll see him in a fight.

"Over the past few fights I've just had this sinking feeling in my stomach whenever I have stepped into the Octagon and I realize, I DONT WANT TO WRESTLE. Not saying I will never do MMA again, but right now I just want to hit people. MMA and the UFC have been great to me and I will always support the company and the sport. I want to thank all my fans, sponsors and haters for being with me on this journey and I look forward to what future holds."