“Now without having a fear of falling down and having confidence in my
strength and conditioning on the ground, I don't have to be so cautious
with my striking anymore.” - Pat Barry 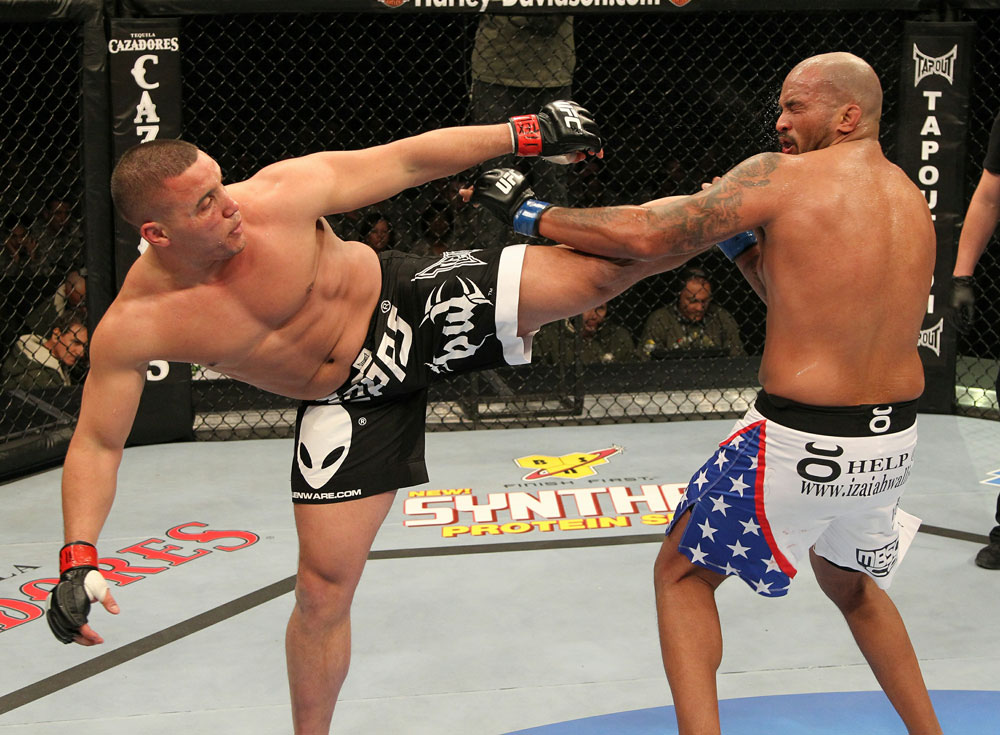 Over the past few years, fight fans have gotten to know and love “HD” as the “kickboxer”. Barry has wowed UFC crowds with exciting striking showcases like his devastating leg kicks against Dan Evensen at UFC 92 or his heavy handed punches against Antoni Hardonk at UFC 104. He has never failed to deliver a gutsy or entertaining performance in his five fights in the Octagon. Amazingly enough, in his three years in the UFC, Barry has relied almost entirely on the stand-up skills he honed previously as a professional kickboxer.

Recently, a change has begun in him that will only spell new and more troubles for his fellow heavyweights, including Barry’s next opponent, Cheick Kongo. As Barry enters the Octagon at UFC Live on June 26th, the UFC faithful will bear witness to his evolution from a superb one-dimensional striker to an altogether truly dangerous three-dimensional MMA fighter.

The 31 year old has amassed an overall 6-2 record in MMA, firing off his fists and feet all while doing his best to avoid the ground, the cage and the clinch. “For myself, I always had to be a one hit striker for fear of people getting close to me and grabbing me and pulling me onto the ground,” admits Barry, explaining how cautious he had to be in his prior bouts, only allowing himself one powerful strike at a time. “Now without having a fear of falling down and having confidence in my strength and conditioning on the ground, I don't have to be so cautious with my striking anymore.”

Enabling “HD” to let loose his standup from sniper rifle to automatic assault rifle have been the menacing men of Team DeathClutch. “I've been out here with these giant wrestlers - like actual giants,” exclaims Barry of his monstrous teammates and training partners at the famed gym Brock Lesnar founded. “Cole Konrad is a monster. He's 6'4" or something and he's this 300 pound, super stud, extremely athletic, wrestler. You look at him and think that guy won't be able to make any quick movements and he'll shoot on your ankles and it's just ridiculous. Once he gets on top of you he never gets off.”

The New Orleans native is out in the cold mountains of Minnesota shoring up the holes in his game the only way a heavyweight can: battling even bigger heavyweights. “I'm finally training with proper heavyweights and I'm becoming the type of strong I'm supposed to be,” asserts Barry, who will need to have that strength come fight night against the 6’4” Frenchman Kongo. “I've got all these wrestlers, plus I've got this jiu-jitsu machine, Eric ‘Red’ Schafer, as my jiu-jistu coach who just won't stop. I’ve been working on a lot of mental focus, strength and conditioning and wrestling - a lot of that. I'm actually going to show up with muscles to this fight.”

One would assume “HD” lost his last fight, considering all the fervent attention Barry has paid to trying to eliminate any weaknesses. To the contrary, Barry won a war of attrition against Joey Beltran in January at UFC Fight for the Troops 2. He landed punishing blows with fists, feet and shins for all three rounds, while Beltran and his granite chin, head, and legs continued to lurch forward. It was an incredible display of heart and durability shown by “The Mexicutioner” as well as a great learning experience for Barry that he can push and win a fight for its entirety.

“Now, I know that I can do 15 minutes and can continue fighting,” tells Barry. “I can be in what seems like an unwinable situation and keep on pushing because anything is possible. I mentally got stronger because of that fight with Joey Beltran. I've never run across someone so resilient or so stubborn or who was so unwilling to just stop and fall down in my whole career like Joey Beltran. It was a major test for myself to make sure I kept going and didn't just say this is pointless. I threw everything at him and the kitchen sink and I shot him and he would keep coming forward. If this was UFC 1 with no time limits, then Joey Beltran would be the heavyweight champion of the UFC. Guaranteed.”

Imbued with a new confidence in basically every facet of his game, the New Orleans native will next be facing a heavyweight stalwart that has undergone a similar transition to Barry’s. A veteran of 13 fights in the UFC, Kongo was also a heralded professional kickboxer before entering MMA. With an overall record of 25-6-2, Kongo has transformed himself from just a striker to an all-around fighter over the years.

Many will hope this fight to be a climatic exchange of perfectly executed strikes, as in a videogame like “Street Fighter II”: Sagat versus... Sagat. “At first, knowing Cheick Kongo is a kickboxer and we're supposed to have a striking war, that would be exciting, but I don't think that's going to happen,” estimates Barry, who doesn’t expect a standup duel, although he certainly would welcome it. “I wouldn't put Cheick Kongo in a standup guy category anymore. At one time, I would have, but not anymore. He is an MMA guy, a ground and pound guy, that's what he does.”

What Barry expects from Kongo is where Marty Morgan and Team DeathClutch’s training comes most into play. “In his fights, he pushes forward, he pushes the pressure on people, he'll push you against the cage and pull your legs out from underneath you with his really long reach,” Barry states matter-of-factly, and clearly, that is what Barry is training to counteract for this fight and fights going forward. “That's what I expect from him and that's what I'm looking forward to. He hasn't gotten any worse at what he does, he's only gotten better at it. I expect anyone to take me down because I don't expect anyone to trade punches and kicks with me for an entire fight.”

On June 26th in Pittsburgh, Pennsylvania at UFC Live, “HD” will take on Kongo in a heavyweight battle between two former kickboxers turned MMA fighters. “It is either I hit him once and he falls down or I hit him a lot and he falls down,” Barry declares, making it clear that he will be looking to unleash the same ferocious striking that won him fans the world over. “Eventually, he will fall down. Eventually, he will stop. I get into every fight knowing that I can stop every human. Joey Beltran doesn't count.”

And if the fight does go to the ground, Barry has eyes to finish the fight there as well. “I'm getting a submission before the year is over with,” he affirms, and that somebody could be Kongo.