"Somebody is getting knocked out in the first round and it’s not going to be me." - Pat Barry 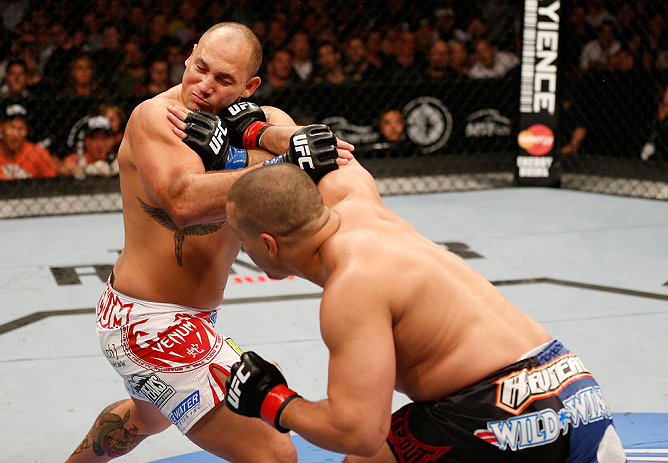 David versus Goliath is a story that has been told for generations and, at times in the MMA world, Pat Barry has been in the David role, since at 5-foot-11, he is one of the shortest heavyweight fighters in the UFC. But he doesn’t let his height become a disadvantage.

“The Stefan Struve fight, my punches and reach didn’t hamper me, and he’s the tallest fighter in the UFC,” said Barry. “I think if my height was such a disadvantage, I would be getting destroyed in that cage. Yes, I’m not the tallest but that doesn’t mean much to me when the door is closed. My heart makes up for the height difference and I show it each and every fight.”

Indeed, his heart plays a big role in why Pat Barry is still making waves among the big boys. Despite losing two out of his last three fights, Barry is still showing that he is someone that shouldn’t be looked past. And excuses aren’t a part of his repertoire.

“Look at my last fight again (Shawn) Jordan,” said Barry, who was stopped in the first round in the UFC 161 bout in June. “He poked me in the eye but I’m not saying I lost the fight because of that. His hands shouldn’t have been that close to my body so that’s my fault. I’m not going to 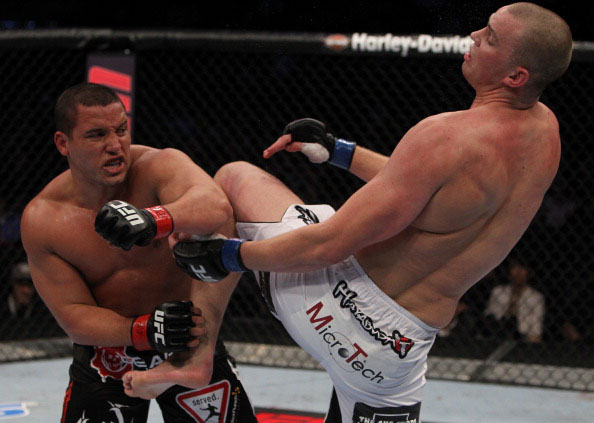 blame the eye poke as the sole reason why I lost. Like I said, his hands were real too close to me and they shouldn’t have been. My eyes are sensitive, but to say I lost that because of that is not acceptable. I’ve already forgotten about that and already focused on my next opponent.”

Barry will be looking across the cage at 6-foot-4, 265-pound Soa Palelei on Friday (Saturday in Australia) following a 15 hour flight to Brisbane. But getting there is half the battle, with plenty of nerves attached.

“I hate flying and would rather take a boat there,” Barry said before his flight earlier this week. “I wasn’t in a position to say no to a fight when it was offered and not many fighters are. This is the longest flight anywhere and I’m not looking forward to it at all. I was going to say yes to the fight no matter what, but flying is going to be more nerve-wracking for me than the actual fight.”

Now settled in the land down under, he will be facing the hometown favorite in Soa Palelei. Palelei has won his last nine fights, all by knockout, and he is truly living up to his nickname “The Hulk.” But stepping into that cage with Barry, he is just a regular man like anyone else.

“The guy is a brute, huge, and the hometown guy, but it doesn’t matter to me. I will attack him like any other fighter I would face. He is a finisher like me and I plan on finishing him in the first round. I’m sure he wants to do the same because neither of us want to fight 15 minutes. That’s my game plan and I’m sure it’s a mirror image of his. I’m sure the fans want to see it.”

Among the fans of the UFC there are always a select few that like to get on to social media with their sole purpose being to aggravate fighters. Barry is not excluded from that as he has seen what social media has done to limit a fan base of the majority of good friendly people.

“I get messages from people daily saying I should focus more on my training instead of interacting with fans or posting ten second videos. I also get messages saying that if I waste all my time on videos, I could be using it on my ground game. There are some sad people out there 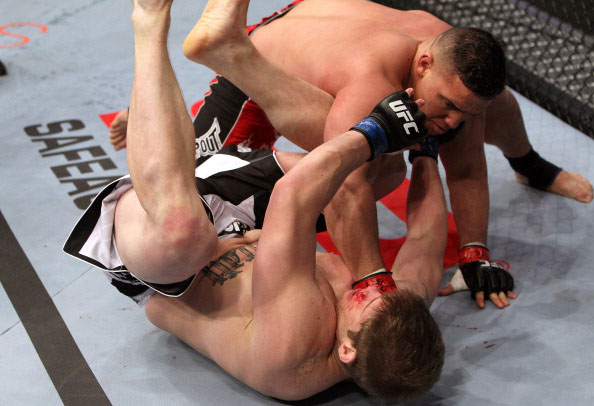 and they have to talk because hopefully they get a response from me and feel better about themselves. Those people are hopeless individuals and need to go away. But at the same time they need to stay around too.”

There is a time and place where jokes and laughter are great, but with Pat Barry that’s his lifestyle. He just so happens to a UFC fighter, prompting some followers to say that there should be less play and more work.

“They hate when I post videos, but when I post something such as simple as a tweet saying ‘hello’ they get all mad, saying ‘how come you didn’t post a funny video or picture?’ It’s very aggravating with some of these people because they think I’m off the radar when I don’t post something that interests them more.”

With social media playing a big part of the MMA community now, many have taken to it to get know their fans more on a personal level. But when the hate begins to spew between computer monitors some let that affect them personally. It’s just the opposite for Barry.

“The problem is the people that hate on me on social media are somebody’s parents or teacher,” Barry said. “I don’t let this stuff bother my training or fight game but it does bother me that these people are out there to spew hatred. A lot of them are parents who should be role models for their kids but they get mad at me for not retweeting them because it was their 42nd birthday.”

With the chopping block being always in the back of the fighters’ minds, Barry losing two out of three does have him considering the future if he adds a third loss this week.

“It could happen no doubt, but if they cut me based on my performances the last few fights it is what it is. I haven’t lost a fight where I was too small or that made me look overwhelmed. No losses were because I was the smaller guy in weight because I stood in there with the best of them.”

With the hometown crowd behind their opponent, many fighters love the boos when they step into enemy territory. They play off that and harness the hate to build themselves up while walking 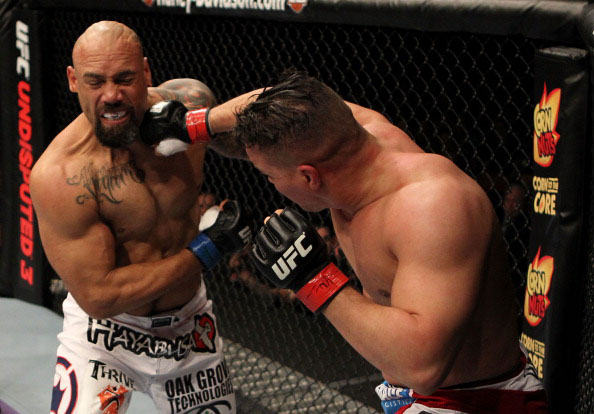 out to the Octagon. But with Barry, he doesn’t think the hatred will filter in.

“With the person I am and the way I carry myself, I won’t find anywhere where I will get booed. When I walk out I won’t hear any boos because the character that I am, I think there is no reason for the crowd to hate me. I’d be very surprised if I heard any of those boos on Saturday or for the rest of my career.”

After the long agonizing plane flight and the nerves that will happen throughout the entire week, the time when the door is locked and there’s only three people left in the Octagon is the one thing that Pat Barry is looking forward to. And when it’s all over, there is one result that would make the entire trip worth it.

“Somebody is getting knocked out in the first round and it’s not going to be me.”