Pat Barry - Back on the Rollercoaster

"Every once in a while I have Marty Morgan standing on a chair and I’ll run past him and see if I can kick him in the head.” - Pat Barry 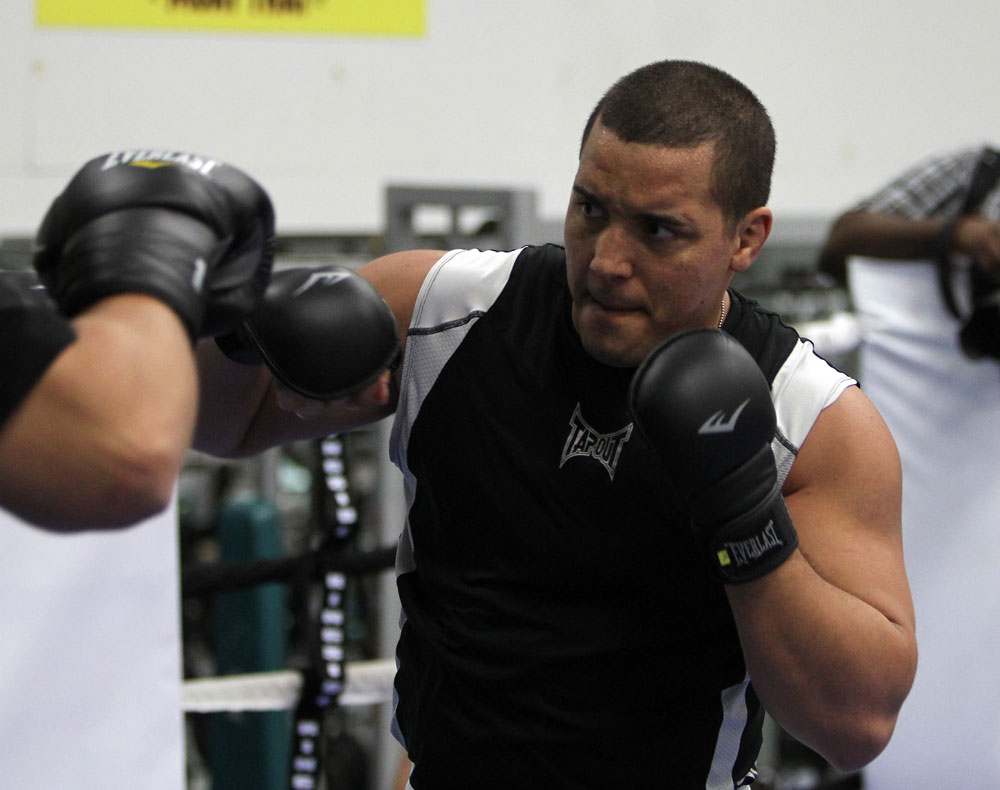 Pat Barry got the same question everywhere he went. “It’s never been something else, ever,” admits the UFC heavyweight prospect. So once he got through telling strangers what he did for a living, the response would be, “how many times have you been knocked out?”

But Barry, who seemingly has an entertaining answer for everything, couldn’t really respond with something people were looking for. He would just say “I haven’t…yet.”

If you buy in to all the machismo surrounding combat sports, you could say Barry was bordering on blasphemy, but when you’re a true tough guy, you don’t have to play the role in real life as well. And Barry is as blunt as anyone when it comes to the realities of the fight game. You stick around long enough, and your time will come.

“That’s the name of the game,” he said. “We’re gonna knock people out and we’re gonna get knocked out, there’s no avoiding that part of it. I was lucky enough to go a really long time without ever having to come across it, but if you can’t accept getting knocked out or losing or getting hit, then this is the wrong sport to be in.”

On June 26th, after eight pro MMA bouts, 25 kickboxing matches, and countless sparring sessions, Barry’s name got called by Cheick Kongo. After dropping Kongo twice and nearly finishing him, Barry was caught by the French contender, who fired off a right uppercut that rescued victory from the jaws of defeat and put the New Orleans native out cold.

“I thought I had won the fight when I was lying on my back in the center of the Octagon,” said Barry. “I said ‘What do you mean I’m out? He’s out, y’all are crazy.’ (Laughs) As a matter of fact, I didn’t even know I was lying on my back. When the doctor said, can you try to sit up for me, I remember saying how am I gonna sit up when I’m already standing? You’re the worst doctor ever. You should be fired. (Laughs) But once I realized what happened, it was almost a bit of a relief. My entire career has gone knowing that eventually I will be knocked out. And every time I step into the ring or the Octagon, there is that little bit of ‘oh s**t, is this gonna be the time?’ And that’s stressful. And every time I got out of a fight, I go ‘woo, I escaped it again.’ I had gone ten years escaping it, ten years of training and fighting and sparring at practice. And it finally happened, so it’s kinda like a big relief. Now I don’t have to worry about it anymore.”

In over 15 years of covering combat sports, I don’t think I’ve ever heard a knockout loss put into perspective quite like that, but then again, few fighters are like Pat Barry. In fact, when talking about the reality that his loss to Kongo will be immortalized on year-end ‘Best of’ lists and on highlight reels way beyond 2011, he isn’t even bothered by it.

“If that was two other people and not me, that would have been one of my favorite comebacks ever,” he said. “That’s a cool fight, a cool comeback, and a cool highlight from the first knockdown to the end. It might be the coolest 20 seconds ever.”

He’s right. But what his reaction to a defeat that may have crushed his peers and left them gun-shy and unwilling to discuss the matter did was allow him to escape the usual emptying of the bandwagon that happens these days after a fighter loses. So even at .500 (3-3) in his UFC career thus far, you won’t find anyone that will say that Barry is a fighter they wouldn’t want to see or hear from again.

“I think it’s my honesty that’s really grabbing on to people and grasping their attention,” he said. “Sometimes, you’re just gonna get hit. That’s part of the game and part of what happens. In the Kongo fight, I lost the fight, but I was definitely winning beforehand. I was winning the fight; I think I might have even won the fight twice before he came along with his win. (Laughs) But that’s what happens. And I think what it comes down to in the end is that people know that, and they know I’m gonna put on exciting fights and that I’m here to perform all the time. They keep that in mind. I don’t find myself to be a very boring fighter or a slouch fighter. People know that whenever I get in the ring that something exciting is gonna happen.”

Odds are that it’s going to happen again this Saturday night in Washington D.C. when he faces fellow heavyweight action hero Stefan Struve, another fighter who is no stranger to the miracle comeback. Adding to the intrigue is the height discrepancy between the 6-11 Struve and the 5-11 Barry, and neither has shied away from poking fun at the physical matchup. But in the gym, it’s all business.

“I’ve fought really tall guys in kickboxing and I’ve come across guys like that before,” said Barry. “But I’ve never come across an almost seven foot tall, young, energetic, athletic Dutch kickboxer who is extremely dangerous. And if you know anything about the world of fighting, then you know that Dutch kickboxers are some of the most dangerous kickboxers on Earth.”

So how do you replicate that in the gym considering that there aren’t too many guys around who fit that description?

“I brought in a guy named Maurice “The Pirate” Greene from Chicago,” said Barry. “He’s a 6-foot-9 kickboxer who formerly wrestled. He’s got two inches under Stefan, but I figure if Stefan gets into his fight stance, he might be 6-9. Other than that, every once in a while I have Marty Morgan standing on a chair and I’ll run past him and see if I can kick him in the head.”

Barry’s also made a switch in camps to Minnesota’s Team DeathClutch, the training home of former UFC heavyweight champion Brock Lesnar, mainly to get work with a steady stream of heavyweights who can help him sew up the holes in his ground game.

“I definitely need heavyweights to train with,” he said. “I need wrestling, and I need jiu-jitsu. And out here is a gym that’s completely comprised of heavyweights and superstar wrestlers who all know jits. And I need to be around bigger guys, stronger guys, wrestlers, and guys who grapple. Finally, for the first time, I’m the smallest guy in the room and the weakest guy in the room, so I’ve got no choice but to get stronger.”

It’s an aspect of the sport that people forget about or don’t think about at all, as getting a group of strong, athletic heavyweights together in one gym is a rarity. Barry has gotten some comments about leaving his longtime camp with Duke Roufus in Milwaukee, but when it came to adding what he needed to his arsenal, the 32-year old simply needed to make the move.

“Ever since I made the transition to DeathClutch from Roufusport, I’ve been getting all these messages – ‘oh, you’re a traitor,’ ‘how could you leave?’ But we need big people to train with,” he said. “If you’re a big guy, you need to train with big guys. If you’re a little guy, you should be training with little guys, someone who can replicate the guys you’re going to be competing with. This is what we do, and you gotta be able to simulate it as much as possible. The only thing better is if you could actually train with the guy you’re gonna fight, but we can’t do that.”

No, you can’t, but if someone could pull it off, be friends with a future opponent and still try to rip his head off on fight night, it would be Barry. Friends are friends, and fighting is fighting. As for getting knocked out, that chapter’s done with. It’s time to move on.

“As of right now, in my heart and in my head, the way that I feel is that now, I’ll be even more comfortable,” he said. “It’s like worrying the second time you get on that rollercoaster – you know what it’s like already.”