The Passionate Irish Roar Returns to the 3 Arena

DUBLIN
Jon Delos Reyes looks a little bit smaller than he did at Thursday’s media day as he walks toward The Gibson Hotel ahead of UFC Dublin’s official weigh-in. On the hotel’s fourth floor, fans stop Brazilian strawweight Ericka Almeida for an autograph. She’s wearing a bathrobe, having just used the hotel’s sauna to cut her the last few pounds to guarantee that she hits the scales at 116 lbs. or less. 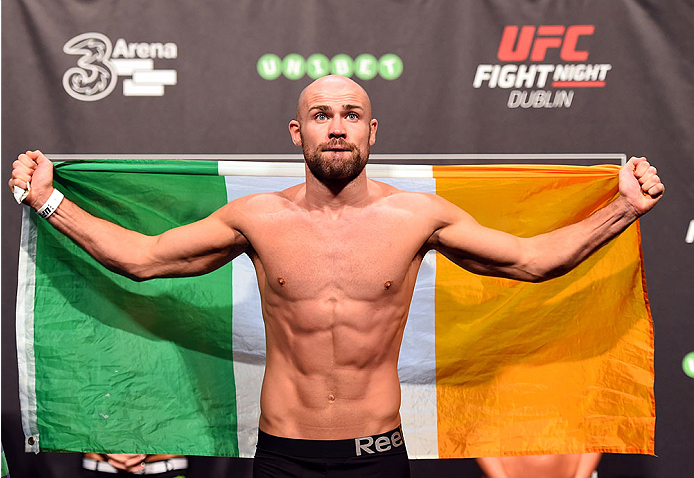 After finishing their media scrums in the hotel, guest fighters Max Holloway, Rory MacDonald, Ben Rothwell and Andrei Arlovski take to the 3 Arena to warm up the crowd on the same stage that the weigh-ins will take place. The gathering grows steadily throughout the session, and by the time they're finished fielding questions, the infamous Irish support are ready to see their heroes weigh in.
You can’t help but cast your mind back to last year’s July show as Cathal Pendred takes to the stage with the tricolor, the first of the Irish charges to appear before the crowd. As he gets nose-to-nose with his opponent Tom Breese, the two share a brief physical exchange that forces UFC president Dana White to step in.
The classic rivalry of Ireland versus England elicits a massive surge in the volume in the arena. As the Englishman gives the crowd one last flash of his biceps, Pendred raises the flag again to more jubilant cries.
Related content: Part 3 | Part 2 | Part 1
Aisling Daly fights back the tears as she climbs the stairs to the platform. Her first outing as a UFC fighter in her hometown causes a wide smile to break across her face as she is greeted by her vocal support. After facing off with Ericka Almeida, “Ais the Bash” pumps the air on her way down the stairs into the backstage area. One of the pioneers of the sport in Ireland, she makes 116 lbs. more comfortably than ever.
Neil Seery is the only one of the representatives from the Republic of Ireland that doesn’t carry a tricolor as he emerges from back, but there is no doubt that he’s a hometown hero based on the ovation he receives. As he and Jon Delos Reyes stand in front of each other, a slight smile is on the Finglas man’s face. In Delos Reyes, Seery is confident that he has found an opponent who will stand and exchange with him. The Guamanian seems only too happy to oblige him.
Norman Parke and Reza Madadi’s faceoff has been eagerly anticipated all week and when the two finally meet, their standoff proves to be worth the wait. Madadi puts on his tracksuit bottoms and pulls out his pocket, and he urges Parke to hold, a symbol that would portray the Northern Irish fighter as his property if they were in prison.
In reply, Parke takes a pink handbag from his coach Rodney Moore’s holdall and throws it at the feet of the Allstars fighter.

Having served a sentence for aggravated burglary of a luxury handbag store, the action has the desired effect as the two launch themselves at each other. Parke stands with one hand in the air after their interaction, and crowd’s response to him proves that this is very much a hometown show for the Bushmills man, too.
Paddy ‘The Hooligan” Holohan gives John Kavanagh a knowing nod as his public greets him. When he steps up to register at 126 lbs. he takes a minute to soak in the atmosphere, having waited 15 months to feel it for the second time.
Holohan has a point to prove Saturday night and given his main event slot, a win or a loss will be amplified. Either he or Smolka will enter the Top 15 rankings with a win, and the energy from the Irish will only help ‘The Hooligan” as he tries to claim the most significant win of his career to date.
Peter Carroll is a longtime MMA journalist who writes for the Irish Mirror, FIGHTLAND and SevereMMA.com. Follow him on Twitter at @PetesyCarroll