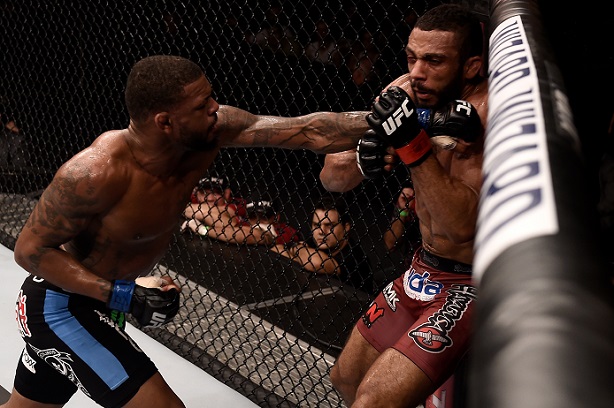 In his first bout since March of 2014, Michael Johnson picked up right where he left off Sunday at Ginasio Gigantinho in Porto Alegre, Brazil, winning a three-round unanimous decision over Brazil’s Edson Barboza to extend his current unbeaten streak to three in the UFC Fight Night co-main event.

“Edson’s a great competitor, but I wasn’t gonna stop for 15 minutes,” Johnson said.

Johnson raced out of his corner at the start, setting a frantic pace as Barboza looked to counter. By the two-minute mark, a more measured rhythm emerged, both fighters taking their turn to unleash their strikes. The faster and busier Johnson was getting the better of the action, but as “The Menace” rallied, it prompted the now bloodied Barboza to throw back harder.

Barboza bounced back in the first half of round two, with his kicks doing much of the damage. Johnson regained the lead though, prompting Barboza to look for a takedown which instead went to the American, who quickly returned the bout to the feet and ended the round with more solid shots.

Johnson kept his work rate high throughout the third round, pushing Barboza harder and harder, clearly intent on making sure he would not be denied the victory. And he wasn’t. 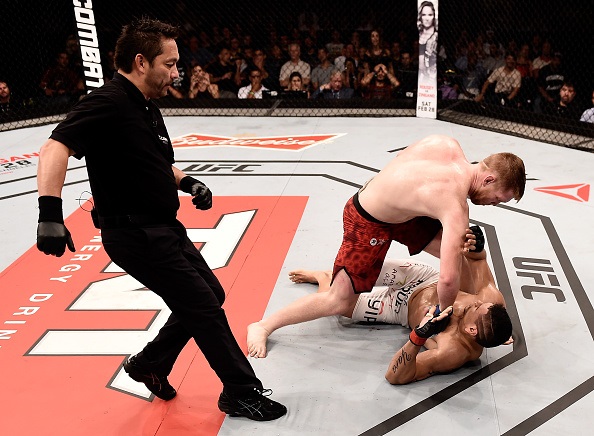 ALVEY vs. FERREIRA
Belo Horizonte’s Cesar Ferreira got off to a fast start against Sam Alvey in their middleweight bout, but it was Alvey who got the last word with a devastating first-round knockout win.

Ferreira was effective with his punches and kicks in the opening round as he took advantage of Alvey’s slow start. But suddenly and definitively, with less than two minutes remaining in the first, a flush right-left dropped Ferreira as if he had been shot. Two more right hands ended the bout, with referee Mario Yamasaki stepping in at 3:34 of the round. 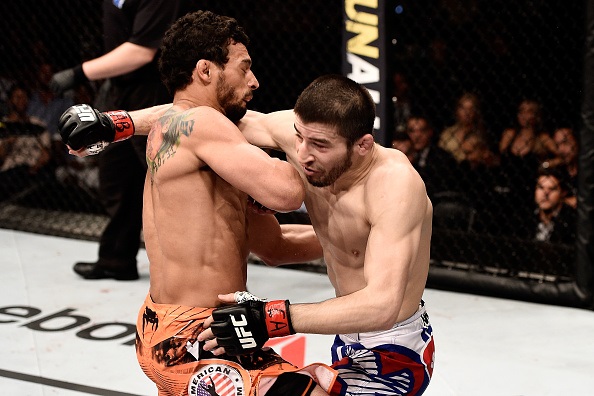 It was far from a fight to remember, but Brazilian lightweight Adriano Martins will take the win, as he upset Dagestan’s Rustam Khabilov via unanimous decision.

There was little significant action in the opening round outside of a quick takedown by Martins and a couple right hands from Khabilov, and there was more – or less – of the same in round two. Khabilov was landing the more significant blows though, and once he started landing with some inside elbows with two minutes remaining, he began upping his work rate. A big left hand from Martins stunned Khabilov just before the bell though, leaving a lasting impression.

In the second minute of the final round, Martins took the bout to the mat and got the mount briefly, before Khabilov escaped and got back to his feet. A takedown in the final minute also added points to Martins’ tally and may have sealed the win for the Manaus native. 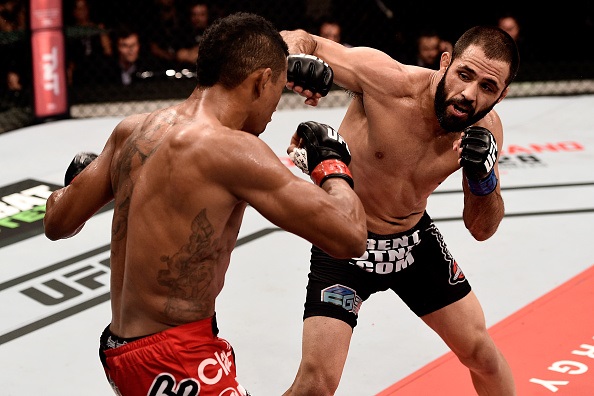 Saenz caught a kick and got an early takedown of his foe, but the Brazilian rose quickly, hurting his opponent with a front kick in the second minute. With a minute left, Alcantara got a takedown of his own, but as he looked to take his opponent’s back, Saenz got loose and got into the top position, using his ground-and-pound attack to finish off the round.

Alcantara opened up the second with a left kick to the head, yet a head-clearing clinch by Saenz allowed the Arizonan to get out of trouble. An ensuing scramble ended up with Saenz in control on the mat, and the underdog scored with several punches and knees. Alcantara looked for submissions from the bottom position, but to no avail. With a minute left, the fight returned to the standing position, Alcantara scoring well on his bloodied adversary before he suffered a late-round takedown.

Saenz continued to impress in the final round as he scored with hard elbows at close range before picking up another takedown and sending down some more ground strikes. Even standing, Alcantara was running out of answers, but in the final minute he got a takedown and threatened as he took the back, but it was Saenz ending the round and the fight in control. 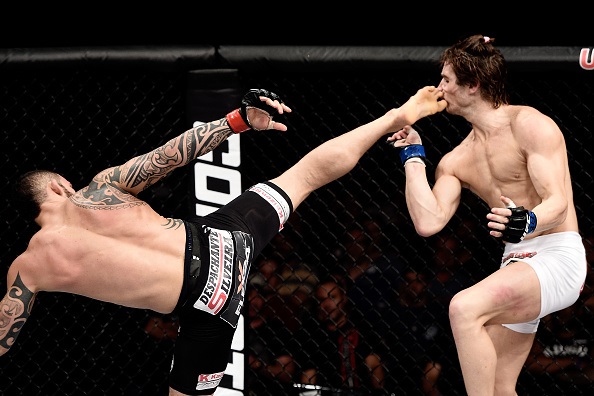 PONZINIBBIO vs. STRICKLAND
A steel chin and a stiff jab wasn’t enough for Sean Strickland to keep his unbeaten record, as Santiago Ponzinibbio bulled his way to a hard-fought three-round unanimous decision win in the welterweight main card opener.

The fight got off to a fun start for those watching, with Strickland and Ponzinibbio both doing their best to impose their will on the other. Strickland worked a stick and move strategy well, while Ponzinibbio, aided by a right kick to the head, had his moments of turning the bout into a brawl, while also ending the round with a point-scoring takedown.

Ponzinibbio slowed in the second and third, allowing Strickland to fight at his pace and work a sharp left jab. But Ponzinibbio’s  hard shots, including another head kick in the third frame, earned him the judges’ nod in a punishing three-rounder that saw both men bloodied by the other’s assault.