Part 2: Alvarez says he's only man who can beat Khabib 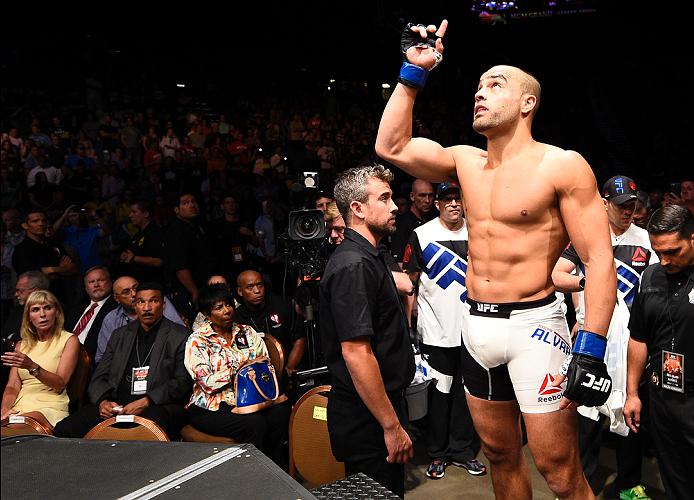 If you’re a fan of the lightweight division, April is your month.

During the three UFC events taking place in Brooklyn, Glendale and Atlantic City, eighteen 155-pounders will make the walk to the Octagon, a number that includes ten of the top 15. For those lightweights not competing this coming month, it’s a time to get out the notepad and pencil and get down to studying possible opposition, but one of those fighters, No. 3-ranked former champion Eddie Alvarez, his eye is on just one bout.

“I’m looking at the title fight a hundred percent,” said Alvarez, who is coming off an epic third-round knockout of Justin Gaethje in December. “I tried for other fights recently and they just don’t seem to come to fruition, but I just want big names and big fights. I’m not here to be a gatekeeper. Since I joined the UFC, I told (former UFC Chairman) Lorenzo Fertitta and (UFC President) Dana White I’m not here to build myself up. I’ve been the champion of every organization I ever fought in, and I’m here simply to fight the best and biggest names that the UFC has to offer. That goal hasn’t changed and it will remain the same. Whoever they consider the best, I want to fight him and I want to see how I’m gonna do.”

Many believe that the winner of the UFC 223 main event between Tony Ferguson and Khabib Nurmagomedov will be the best 155-pounder in the game, but there is a Dubliner named Conor McGregor who will undoubtedly have something to say about that. But in the meantime, it’s “El Cucuy” and “The Eagle” doing battle in Brooklyn on April 7, and Alvarez is keen to break the bout down.

“It’s an interesting fight and it has an interesting dynamic,” he said. “Khabib has been somewhat unstoppable, and he reminds me of when Shinya Aoki was in his prime. Aoki wasn’t the most well-rounded guy, but he understood how to bring guys into his realm and into his kind of fight. Although Aoki didn’t seem like much in his appearance, he had this unique ability to bring guys into his world. That’s the kind of competitor I see in Khabib and it’s gonna take a unique athlete and person to be able to keep him on his feet and with the right sort of strategy as well.”

Alvarez knows Aoki very well, seeing a five-fight winning streak snapped by the Japanese star via submission in 2008 before returning the favor with a first-round stoppage in 2012. He was able to figure his foe out over those four years, but Ferguson won’t have that luxury, as he will only have 25 minutes to decipher the style of the 25-0 Nurmagomedov.

“I think Tony Ferguson has the heart, the will and the work ethic to do well,” Alvarez said of the interim titleholder. “I just don’t think that he has the type of build or is the type of athlete to beat Khabib. I’ve been watching their fights for the last couple months and when I look at a guy who gave Khabib trouble in Gleison Tibau, I look at a very basic guy who has strong wrestling and is a very strong, athletic person. I kind of look at a guy like myself a little. (Laughs) I think in this division, I’m the only guy who can beat Khabib. I don’t see any other really hard opponents for him. I don’t think Tony is strong enough, and that’s going to come into play. He’s too long and lean and he’s just not strong enough of a wrestler to do it.”

Yet no matter who emerges victorious at Barclays Center, the 34-year-old is ready to be the next in line for a shot at regaining his crown.

“I don’t think anybody else wants to see me in contender fights,” he said. “It would be silly. I’ve been in this sport damn near 15 years now. I’ve been fighting since I was 19 years old, three, four times a year. So I don’t know what I’d be doing. I’d be twiddling my thumbs fighting contenders and being a gatekeeper.”

Alvarez hopes to fight in June, though, and with that being too soon of a turnaround for a title fight against the winner of Ferguson-Nurmagomedov, could the Philadelphian be talked into a rematch with the Dustin Poirier-Justin Gaethje winner? Hint, hint.

“I have a slight interest in that fight, to be honest with you,” laughs Alvarez, who beat Gaethje and engaged in a no contest with Poirier. “I’d love to see who’s gonna come out on top there, and if the fans roar loud enough, then I gotta hear them, let’s put it that way. I’ve got my eyes peeled for all the top contenders and everybody who thinks they’re the best. They’re the guys I want to go after.”

Consider this the first roar for Alvarez vs Gaethje II or Alvarez vs Poirier II. Either way, or especially if Alvarez can secure a title fight this year, it has to be a satisfying feeling for him to be back at the top and in the mix among the elite. Well, the “back” word may not be accurate, in his opinion.

“To be back is a weird thing,” he said. “I’d like to say that I never went away. A lot of casual fans quit easily, not only on themselves, but they quit on their fighters and the people they consider themselves fans of. They quit on them fairly easy. I know what I’m capable of, and the people who are close to me and been following me long enough know that I’ll never go away. I’ll always answer the bell, and I’m always ready to fight the best guys in the world. I’m never gonna go away, I’m always gonna be the best lightweight in the world, whether I’m holding the world title or not. I know what I can do.”