A look at the bouts and bets that are worth risking your reais at UFC Fight Night: Maia vs. Shields, taking place Wednesday, October 9

Wednesday's welterweight headliner between Demian Maia (-275) and Jake Shields (+235) doesn't necessarily need the sweat of a bet. They're two of the best 170-pound grapplers in the world, in a cage or on a tatami mat. Maia has entrenched himself as a top-10 fighter in the division and Shields is probably one of the 10 most accomplished welterweights in the sport's history. This is enough for many, yet an ever-fickle MMA public is never above complaints and doomsaying. 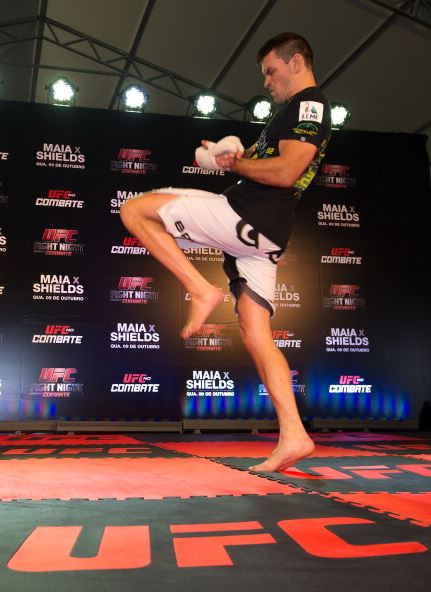 I'd be stupid to ignore the potential for Maia and Shields to neutralize one another, to end up in a clinchy stalemate or have a tepid kickboxing matchup for 25 minutes. However, you'd be stupid to let that ruin the opportunity to make stacks. Who couldn't use a few more stacks?!

Maia and Shields may not be the heaviest hitters, but they've found standup styles that work for them. Shields used his volume leg kicking tactics to nab decisions over Yoshihiro Akiyama and Tyron Woodley. While I've heard Maia critiqued for abandoning his jiu-jitsu in favor of his standup, these critiques are centered on his losses to Mark Munoz and Chris Weidman -- both middleweights with superior wrestling who forced Maia into their fights.

Just when it seemed the memory of him lateral dropping Chael Sonnen was fading, Maia has flexed his wrestling brilliantly since cutting to 170. His February mauling of Jon Fitch is the primary reason for Maia's status as a strong favorite. It's a bit pricy, since he opened at -245 and immediately got bet up by the smarty pantses. Of course, Shields always makes his opponents work their asses off to accomplish anything, but he poses little legitimate standup threat. Maia can actually use his own kicking and superior combination punching if he so choses. 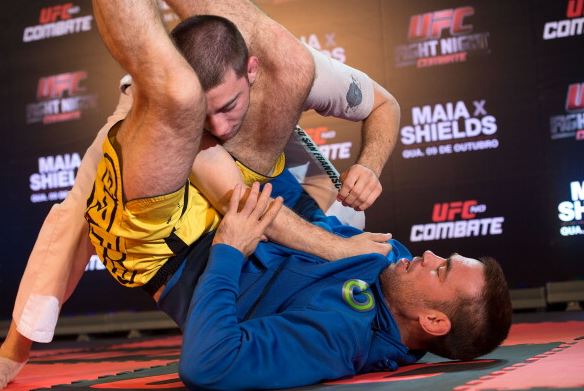 In the grappling department, Shields invites the clinch. He doesn't have an explosive shot and relies on dogged determination in close to finish takedowns. Maia has a similar spatial approach, but regularly shows the ability to use flawless trips, throws, reaps and sweeps to takedown theoretically “better” wrestlers. Maia might not replicate his takedown blowout of Fitch, but if someone is spending serious time on top, it figures to be the Brazilian.

Speaking of the fighters' passports, draw what you wish from Maia being a Brazilian fighting in his home state of Sao Paulo. While it's not like three random countrymen will be judging, Brazilians are 47-16 against foreign opposition on UFC cards in Brazil and it isn't because of softball matchmaking. This is a fight destined for the scorecards and bare minimum, the crowd will no-sell Shields' incessant leg kicking and roar for whatever Maia might do, which still plays in 2013.

-275 isn't the greatest line given how nip-tuck the grappling exchanges might end up being, but if you're willing to wait until the 11th hour, some late underdog money on Shields could move the line preferentially. If not, Demian Maia's latest potential welterweight conquest might best be left for parlay fodder.

Our Boys in Barueri 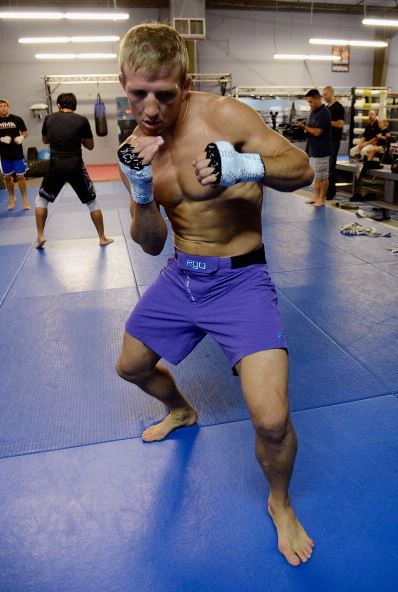 Speaking of parlay fodder, we've got some rock-solid cornerstones to build with. Unfortunately for the Barueri crowd --- and completely contrary to whatever snake oil I just threw out about Brazilians winning in Brazil – they're some good ol' Amurrrican boys.

T.J. Dillashaw (-240) has been on fire recently, blossoming into a true wrestleboxin' dynamo under Team Alpha Male capitano Duane “Bang” Ludwig. Raphael Assuncao (+200) is a legitimate bantamweight, but will be outgunned against the new-look Dillashaw on the feet and unable to stop Dillashaw's takedowns.

Elsewhere, leglocking madman Rousimar Palhares' (+245) welterweight debut figures to be sullied by preeminent spoiler and silent killer Mike Pierce (-290). Outside of a nifty leg attack in the first three minutes, Palhares is going to be headed for an old-fashioned big brothering from the stubby Oregonian. “Toquinho's” gas tank was limited when he was cutting 15 fewer pounds and Pierce thrives on methodically breaking fighters down with his rugged wrestling and technical boxing.

A Maia-Dillashaw-Pierce parlay is about as racy as dad jeans, but it still pays +160. Like dad jeans, it's a bet built for comfort, not style. 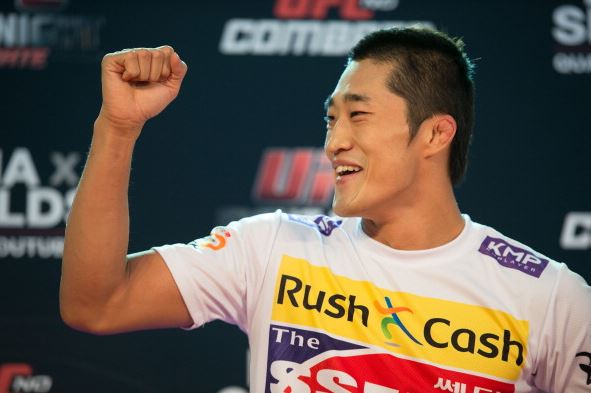 Style is tight jeans, exposing your undie bump to the world at the risk of great discomfort to yourself; style is a
live underdog. Incredibly, none of the good ones on this card are Brazilian, either.

The sexier of the two live dogs I'll suggest comes in the co-main. Brazilian prospect Erick Silva (-260) is still rapidly improving and shows immense promise, as evidenced by his “Submission of the Year”-worthy reverse triangle armbar of Jason High in June. However, South Korean bruiser Dong Hyun Kim (+220) has the right blend of physical horsepower and wrestling to author a mini-upset. Silva might end this in 30 seconds with a shoryuken for all we know, but it's entirely plausible that as soon as he attempts to fire, Kim clinches up, throws Silva down and commences 15 minutes of elbows to the dental.

But, if you're a sucker for comfort, try some Chris Cariaso (+105) on for size. The San Jose native has lost to the best guys he's faced under Zuffa employ – Renan Barao, Michael McDonald, John Moraga and Jussier Silva – but he meaningfully competed in all those fights. In Iliarde Santos (-125), he gets a preferential matchup on the prelims against a more powerful but far less technically skilled striker. Santos will own some physical edges on the short, compact Cariaso, but the American's crafty Muay Thai game, consistent workrate and great clinch skills should all work in his favor to secure him a decision in hostile territory.