A look at the bouts and bets that are worth gambling your gold stopwatch on at UFC Fight Night: Condit vs. Kampmann 2, taking place Wednesday, August 28. Betting odds via FOX Sports.

In the fight game, timing is everything. Naturally, this is generalizable about life itself  -- life metaphors built around combat sports proliferate for a reason. No one ever says “Yeah, time is an overrated concept and I seldom think about it.” So, let no one be surprised that being at the right place at the right time is every bit as crucial when you're trying to cash tickets on fight night. 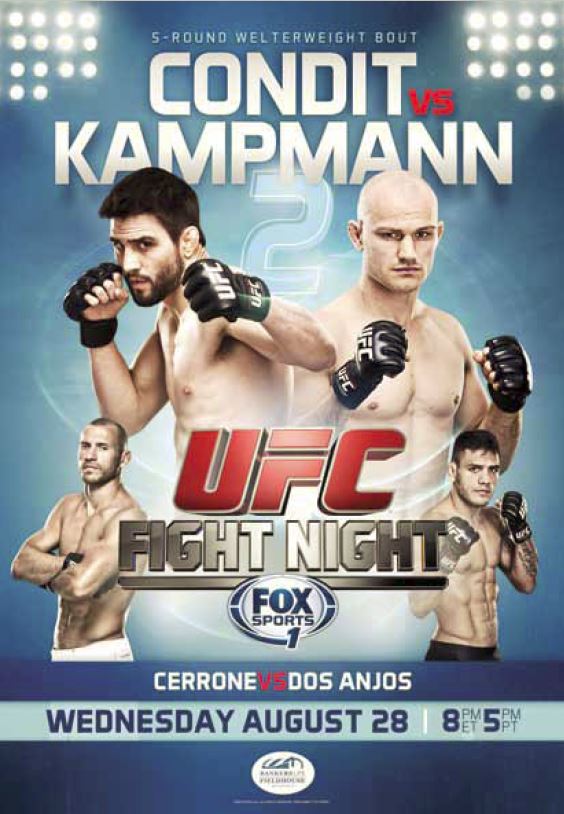 Wednesday night's welterweight main event between Carlos Condit and Martin Kampmann is a rematch of their April 2009 clash, where the Dane won a hotly-contested split decision. However, with four-and-a-half years of real time and who-knows-how-much figurative “fight time” having passed, the second tilt between the two may have very little resemblance to the first fight, outside of the general quality of excitement.

The well-roundedness, technique and toughness of Condit and Kampmann is a lovely style pairing likely to produce highly-watchable MMA. Better still, there are 25 minutes this time around instead of 15. But these are different fighters now. The first time, Kampmann met a still-green 24-year-old Condit fresh off of a chaotic spill over his WEC title with Hiromitsu Miura, of all people. Condit landed the best clean strikes in the first fight, but was mostly stifled by Kampmann's much better wrestling, especially late.

Working with Greg Jackson and Mike Winkeljohn, Condit has reconciled his often bloody and frenetic style with sounder boxing, using his jabs and kicks to maintain distance and set up his sudden KO shots. He's gotten better at stuffing the takedown and better at getting back up quickly. Given his monster chin and the general unlikeliness of a Kampmann sub (even with his tricky guillotine), Condit should be right in his wheelhouse now that he's added the fundamentals and defensive wrestling to keep him comfy in the cage.

Unfortunately, timing is everything, and the best time to bet Condit was when he opened at -180, as opposed to his current -260ish. However, he remains worthwhile parlay fodder and despite his A+ finishing ability and Kampmann's history of getting knocked cold early, Condit's more methodical style as of late makes taking him by decision at +245 worthwhile. 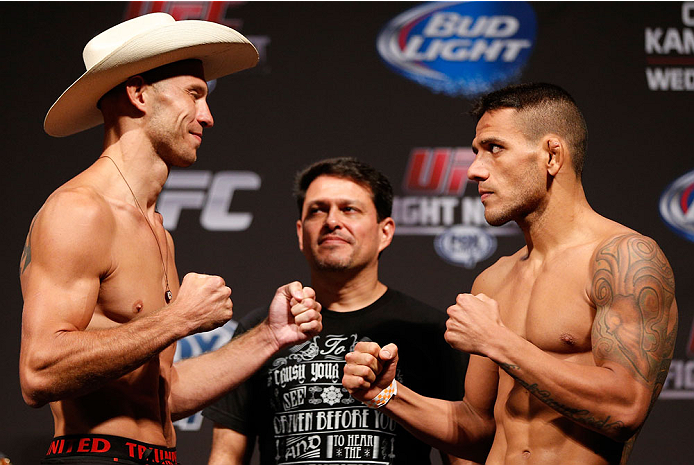 I was personally shocked when Rafael dos Anjos opened as high as a -165 favorite against Donald Cerrone in some places. Apparently, sharps were too: Folks bet the figurative ranch on “Cowboy” quickly and pushed him to a unanimous favorite across the books, averaging around -160 now himself. Darn timing, got us again.

Dos Anjos is a surprisingly well-rounded lightweight who continues to look better with each performance, but his improved striking far pales to the long-distance jabbing and brutal kicking of Cerrone, who holds the real KO power here. Dos Anjos needs to use his wrestling to win and even then, he won't be able to lay in Cerrone's guard and chip away; vote Cerrone.

New Zealand's Whittaker, 22, has taken up training at Tristar in Montreal with MMA's elite but is still an unpolished gem. McGee, long a laborer at middleweight before dropping to 170, is a far better fighter than anyone Whitaker has met in the UFC and has the tough chin and rugged wrestling to pose problems for the heavy-hitting Kiwi. 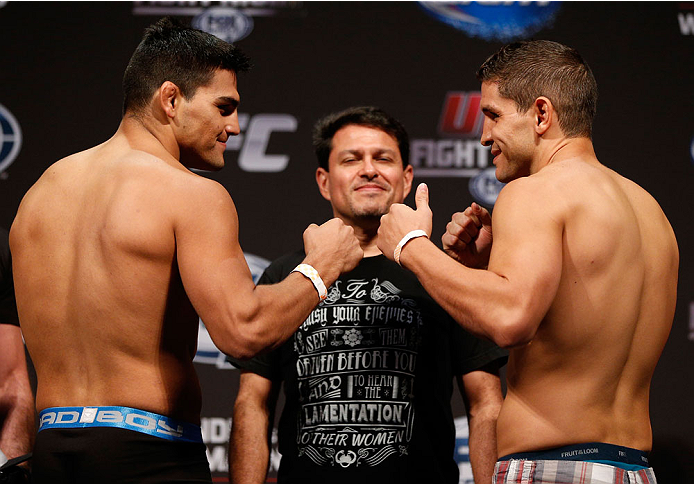 Gastelum was a 21-year-old unknown when he ran through TUF 17 at 185 pounds and showed considerable upside, buoyed by his effective wrestling. In July, the also-anonymous Melancon returned from a 22-month layoff to destroy the much larger Seth Baczynski with precise, technical strikes before accepting this bout at an injury replacement for Paulo Thiago four weeks ago.

Both of these fight profiles are less than ideal, with intriguing style clashes on top of a whole host of unknowns. Melancon at +190, even undersized and on four weeks notice, is a play that intrigues me, but not enough to suggest you throw your hard-earned units on it. If there's a play to be made in this dicey duo, bet on McGee's toughness at least taking Whittaker the distance, win or lose, with the odds of the fight going to decision at -190.

Main Card Men
Speaking of bout length-related props around -190, this is also the best way to take care of the Brad Tavares-Bubba McDaniel middleweight clash. Tavares is a righteous favorite at -450, hardly an appealing line. On the other hand, the bout is -190 to not go to the cards. Tavares isn't typically a big knockout threat -- his only stoppage victim in three years is the immortal Phil Baroni -- but McDaniel has been to a decision just once in 27 pro fights and has been stopped in all of his losses. 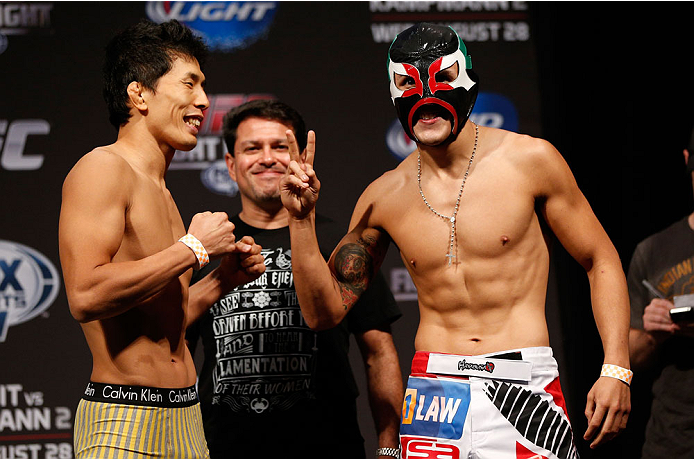 The stopwatch isn't completely screwing us, though. Betting hope springs eternal as Mexican wunderkind Erik Perez takes his first major step up in competition against Japanese grinder Takeya Mizugaki. Behind three spiffy stoppages in the UFC, Perez opened around -215, but the suspicious anti-hype brigade quickly bet the Jackson-Winkeljohn charge down to the delectable -150 realm we have now.

This is the kind of moneyline you might want to max your limit at. Mizugaki is sturdy and savvy but Perez is the shiny young thing about to be put him through his paces. “Goyito” passes the eyeball test so far and can cash in on his big edge in terms of his power and striking arsenal, as well as Mizugaki's longstanding issue of getting dropped. Opting for Don Julio over Gekkeikan might get your Wednesday fight night wild, but if you do it responsibly, the biggest buzz will be in your billfold. 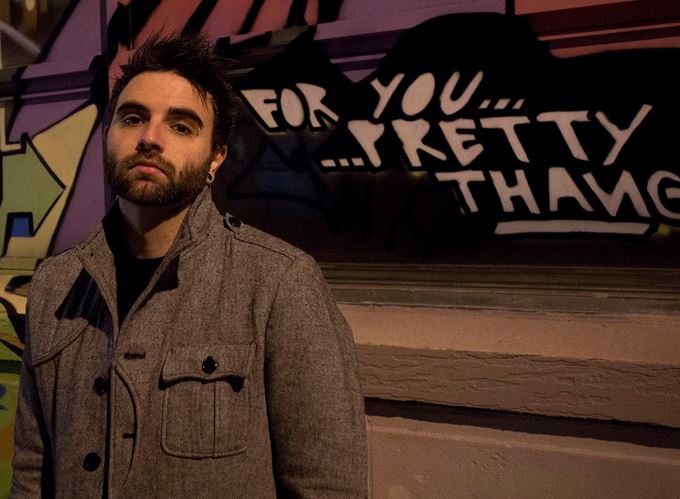