Parker Porter Hasn't Forgotten Where He Came From

The Long Road To The UFC Helped Make Parker Porter Into The Successful Fighter That He Is Today And He's Ready To Keep The Grind Going At UFC Fight Night: Holm vs Vieira
By Thomas Gerbasi, on Twitter: @TGerbasi • May. 19, 2022

Parker Porter had been to more than his share of CES MMA shows, both as a participant and a fan, but when he went to an April show at the Connecticut Convention Center with his wife, Kara, this was a little different. He wasn’t just a local hero; he was the local hero with a three-fight winning streak in the UFC’s heavyweight division.

“I got stopped a couple of times, asked for some pictures,” said Porter of date night at the fights. “It's good to see all my friends and people I used to rub elbows with on a regular basis on the local scene and stay in touch with my roots, so to speak. These people are all such a big part of my life for so long and I don't ever want to forget what I came from. It's humbling, too, to think, 'That was me in there not that long ago.'”

It was, September 2019 to be exact, when he stopped Dirlei Broenstrup in the third round and wondered if he had reached his ceiling in the sport. The Hartford native had fought in big fights and big promotions, but the UFC hadn’t called, and he didn’t know if they ever would.

“There was a period right before I got the call, it was starting to waver,” he said. “I was like, ‘I don't know, man, am I gonna get that call from the UFC, or am I gonna look to Bellator or One FC or PFL?’ The UFC has always been the goal because that's the cream of the crop; that's the big show as far as I'm concerned.  But I love doing what I do and if you can pick up a good paycheck and make a better life for your kids and your family, then by all means do what you're good at.”

Call that a reality check, and one he was willing to make, even if it meant never getting to the Octagon.

He was in. Then he lost in the first round. But Porter’s foot was in the door, and that’s all he needed. He knew he would get another shot and make the most of it. 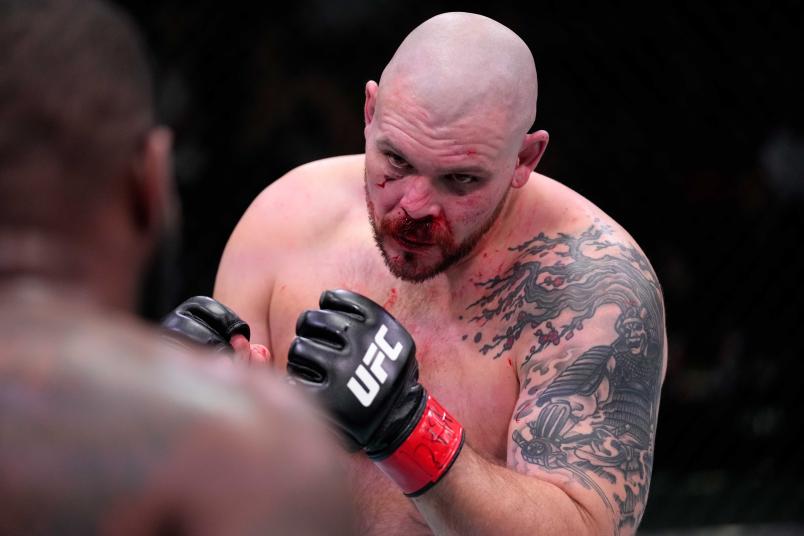 And he did, winning an entertaining three-rounder over Josh Parisian three months later. 2021 produced another win, this one over Chase Sherman, and as he enters his Saturday bout with Brazil’s Jailton Almeida, he does so after a third straight UFC win, a February victory over Alan Baudot.

So does Parker Porter belong in the UFC?

It’s not. The question now is, how far can he go? At 37, can he make a run like fellow Connecticut product Glover Teixeira?

Catch-Up On What's Happening In The Heavyweight Division

It’s a longshot, but that goes for any fighter, whether 37 or 27, with a sparkling unbeaten record or a 13-6 slate. Only a few make it to the top, but in the fight business, only a few make it to the UFC, and that’s something you can’t take away from Porter. But he’s not satisfied. In fact, he keeps the same mindset as he had when he was fighting on the local circuit.

“I never want to forget,” he said. “These guys fighting on the local level, a fight's a fight, whether it's for CES or the UFC. You're going in there with that same mentality - maybe the skill level's a little bit different, the compensation's different but, at the end of the day, a fight's a fight. You're going in there with another guy who's trying to take your head off and you're trying to do the same to him and make sure you can impose your will.”

That grit and determination has served him well, and it’s also a great example for his three sons. And while his older twins know full well what dad is doing for a living, his youngest is still getting accustomed to the MMA world. 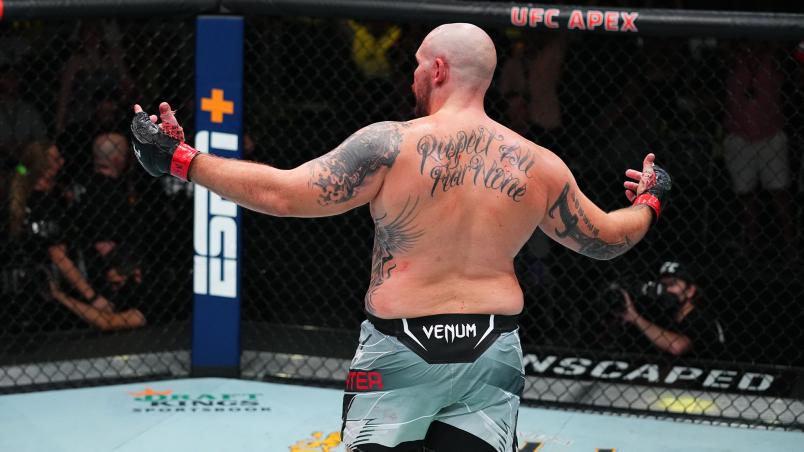 Parker Porter reacts after his unanimous decision victory over Chase Sherman in their heavyweight bout at UFC Fight Night: Cannonier vs Gastelum on August 21 2021 in Las Vegas. (Photo by Chris Unger/Zuffa LLC)

“They think it's cool, but, at the same time, it's not really any different to them,” Porter said. “Dad's always been training, so that's always been the same, but now they get to watch me on TV. I think that's the biggest change for them. And they think it's cool when I come back with the UFC hats or other gifts from my travels, and I'm like, ‘This is for you.’ That's a huge piece of excitement for them. And the baby sees me on TV, but now anytime he sees any kind of combat sports on TV, he's like ‘Dada.’ I'm like, no, that's not me - those are two women. (Laughs) We're not even in the same category, come on kid. You're so smart, how do you mix that up?”

Porter laughs, and yeah, the cliché is that he’s living the dream, but he is, and it wasn’t something that was gifted to him. He came up the hard way, and if you need proof, realize that he fought Jon Jones in his third pro fight, and Gabriel Gonzaga in his eighth. If that’s not paying dues, what is? And the best part is, he’s done it all while staying true to his roots in Connecticut. All he needs now is a sponsorship from Ted’s Restaurant in Meriden.

“I live in Connecticut and I'm a heavyweight,” said Porter. “Of course, I've had a steamed cheeseburger. Those are amazing.”

They are. But steamed cheeseburgers aside, and no matter what happens from here on out, Porter has put together a feel-good story that he hopes will inspire anyone who is questioning whether they should chase their dreams or not.

“Obviously, first and foremost, I'm trying to create a better life for my kids and my wife and myself, but I really want to be positive to people,” he said. “I'm not out here to just take, take, take. I want to be able to give back and inspire and be a good role model for kids, or young adults, or even guys my own age that aren't really sure what they should be doing. If they're on the fence about whether they should quit their day job and go into their side gig full-time or just having the confidence to really go after something that they believe in, even when everybody's like, ‘You should probably play it safe, it's kinda risky.’ They're just trying to stop you and keep you in that bubble wrap. And I'm like, no, bust out of that, get bumped around, get bruised up, get banged up, scrape your knees - go live life. Go take the chance, because it's kind of cliché, but it still rings true - the only things that people regret when they're on their death bed are the things they didn't do, not the things they did do.”