Parke Under No Illusions Before Pivotal Bout 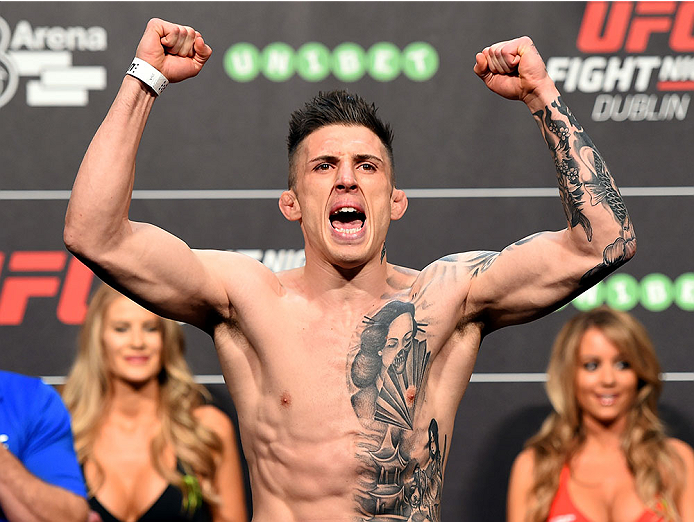 A good omen for a return to the win column?

“I’m not superstitious really,” Parke laughs. “I know a lot of people are, but I don’t really believe in it, to be honest. I can’t sit back and think that because I won last year that everything will be good this year. I just turn up and fight, that’s it.”

It’s probably a good attitude to have, but at the same time, the Northern Ireland native agrees that facing an opponent coming off more than two years away from the game and doing it with Irish fans on his side isn’t a bad thing either.

“I’ve felt pretty confident going into all my fights, and there’s never been a time that I felt uncomfortable or unconfident, and this one’s no different,” he said. “But I know this lad here, he’s been out quite a while. So I’ll use every advantage that I can to get the job done. I want to come out and get straight in his face and pressure him, and once he hears that Dublin crowd, he’ll know that he’s in for a long night.”

Parke and Madadi have been sniping at each other since the lightweight bout was announced, and the bad blood hit a boiling point after Parke tossed a handbag at Madadi after the two weighed in on Friday, a dig at the Swede’s recent prison stay for his role in the burglary of a handbag shop. This recent act of gamesmanship got the crowd roaring, and Parke expects more of the same on fight night.

“I’ve fought in Dublin before, and I’ve had a lot of support down there,” the Bushmills native said. “Once I stepped out in Dublin last year, the reception was unbelievable and I know what to expect this time. The last time, I let my emotions go a bit too much, but this time I know what to expect. This time when I step into the arena, it’s total vision the whole way to be the silent killer and go in and get the job done quick and fast. That’s the only thing on my mind because there is a good possibility after two losses in my last two fights that if the s**t hits the fan here and I lose, I could get cut. So it’s all on the line for me. And there’s no way he’s going to take that from me on my home turf. There’s no way that’s gonna happen.”

Parke, 28, is one of the few fighters, and perhaps even the only one, to address the possibility that three losses in a row could spell the end of his time in the UFC for the present time. You wouldn’t expect that to be the case for the former Ultimate Fighter Smashes winner, especially since the only blemishes on his Octagon record are the aforementioned losses to Gleison Tibau and Francisco Trinaldo, and a draw with Leonardo Santos – two of those taking place in Brazil – but Parke doesn’t care about the particulars. All he sees are the cold, hard facts.

“There’s no point in hiding it because if you’re hiding it you’re only lying to yourself,” he said of the possibility of getting cut if he loses to Madadi. “Everyone knows it. I know it, I understand it, I’m not stupid. You could argue the case that some of the decisions could have went my way, but there’s no chip on my shoulder. I’m not going into the fight thinking ‘I should have won the last one, I should have a win on my record with the two fights in Brazil.’ There’s no way I’m going to be thinking like that. The only thing that I’m thinking of is the performance, and I know whenever I put on a good performance, I’ll win the fight, no problem.

“The UFC’s not all about putting on split decision wins or getting close wins,” Parke continues. “They want you to go in there and completely dominate your opponent and smash him. That’s the name of the game. If you want the big fight to move up the ladder, they want you to do that.”

Parke was in position for that big fight after his performance in Dublin last year, as he was slated to face Diego Sanchez at UFC 180 in Mexico City last November. A knee injury scrapped that bout for “Stormin’ Norman,” and then came the losses to Tibau and Trinaldo, who were both replacement foes for Jorge Masvidal and Gilbert Burns, respectively. Both bouts were close, but the verdicts were not in his favor. The Trinaldo bout especially stuck with Parke.

“If I would have put a performance on and came up short, I would have been happy, but looking back at the fight, it was not a great fight,” he said. “It was a grimy, grappling fight. And my last two fights, my opponent changed from orthodox fighters to two big southpaws, so I knew it was going to end up being a fight like that, but you’re in the UFC, so you have to be able to adapt to these situations.”

As for moral victories in the form of close – not blowout – losses?

“There’s no point in playing that game,” he said. “You go out there and just put him away and your job’s safe.”

That’s the plan for Saturday night. Get in, get out, and celebrate the victory.

“I finished the lad in Dublin and then I got the opportunity to fight Diego Sanchez, and from there it’s been a bumpy road, so I need to get back on track and that’s the only thing on my mind at the minute, to just go in and take this lad out,” he said. “That’s it. He (Madadi) said he wants to keep the fight standing; I hope we can keep the fight standing, but this is mixed martial arts and the game can go anywhere, so I’m prepared for wherever the fight goes. Whoever goes out there and implements their game plan first is the guy who will be victorious, and that’s the way I see it, so good luck to him, because he’ll need it.”