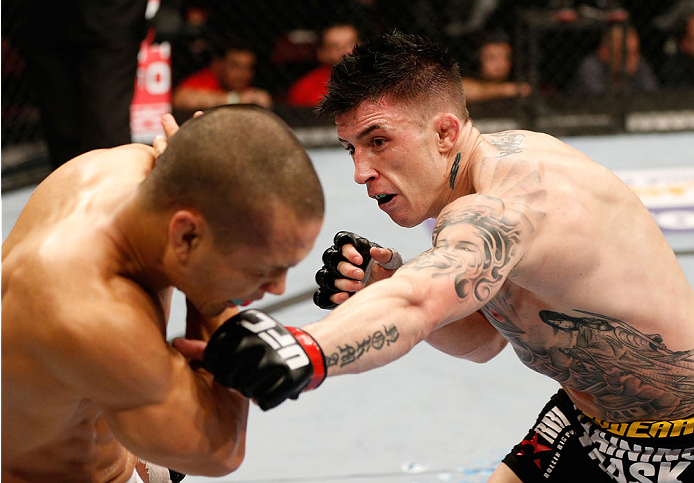 After making a big impression in the UFC with his win on the TUF Smashes series and a subsequent victory over Kazuki Tokudome, Norman Parke wanted nothing more than to keep the momentum going with his October 2013 bout against Jon Tuck.

But then in his first week of sparring at the Alliance MMA camp in San Diego, the Bushmills, Northern Ireland native tore the MCL in his knee. This is about the time you call in sick, heal up, and hope for another opportunity to come along.

Parke had another idea.

“I thought I’ll just tape that bad boy up and keep working away,” he said. “The game plan was to defend the takedown and keep it on the feet, and that’s what I did through the whole fight camp and everything worked out the way it was meant to.”

Crazy, but it worked like a charm, as Parke won a competitive, but clear-cut unanimous decision over Tuck to increase his winning streak to ten. So the question is, why?

“When you’re a fighter, there’s a lot at stake,” said the 27-year-old. “You could be moving up the ladder or going down the ladder, and it (the injury) doesn’t even come into your mind. I never even thought about it hardly during the fight. Sometimes in camp it would get disheartening, but I knew once I got to the fight, I wasn’t going to feel a thing. There was so much adrenalin pumping through my body, I was never gonna feel it. I threw a high kick one time and I felt it tweak a little bit, but then I kept boxing. Boxing won the fight.”

Strangely enough, the judo black belt had been wanting to show off his stand-up game. Against Tuck he had the chance, albeit under less than ideal conditions. But he got the win, and he displayed the new wrinkles in his attack.

“You’ve got to mix it up and show that you’re capable of fighting everywhere, and it just sends a message to the rest of the fighters that you’re not one-dimensional, that you can adapt to any situation and fight wherever the fight goes.”

Of course, after an injury like that, Parke did have to sit on the sidelines for a bit to heal up, and on Sunday, he will make his return against TUF Brazil 2 winner Leonardo Santos.

“Obviously jiu-jitsu’s his strong point, but this is mixed martial arts and every fight starts on the feet,” said Parke of his foe. “And whenever someone’s hitting him with some crazy shots and keeping him on the back foot, his mind’s gonna be confused so much that he’s gonna be shooting from ten feet out, and that’s the last thing you want to do. And once I find my range, that’s it – the fight’s already won in my mind and I see everything happening.”

As far as Parke is concerned, that mental part of the game is just as important, if not more so, than the physical part. It’s also what kept him sane when he waited to get the call for his next fight.

“My mind just constantly thinks about every fight that’s gonna possibly happen in the future,” he said. “Just because I’ve been out, that doesn’t mean my mind hasn’t been thinking about different transitions, positions, combinations, and the different stuff that I’ve been doing in sparring. My mind is always refreshed. It’s not like I’m going away partying and drinking where my mind’s completely off of it. I’m always on my game.”

So when the Brazilian fans start cheering and calling for his head?

“I’ll just think they’re cheering for me anyway, so it doesn’t make any difference,” he laughs. “I’ll just smile and wave at them.”

And as soon as Sunday night’s bout is over, he’ll be looking for a more favorable reception when the UFC returns to Dublin this summer.

“I fought in Dublin before and all my supporters came down and the place went crazy,” said the Northern Ireland native. “Dublin’s the perfect venue and I’ll definitely put my name forward to be on that card.”

You know Parke will show up too, no matter what.