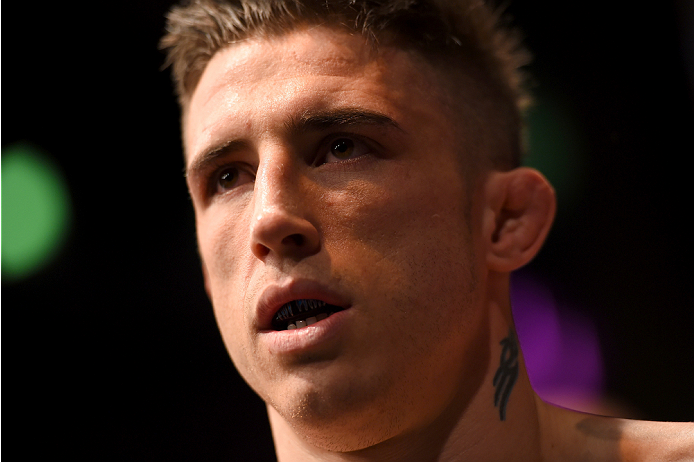 Norman Parke had Reza Madadi screaming for his head last October before defeating his Swedish opponent in Dublin. Now it’s Rustam Khabilov’s turn, as he has made no excuses for his desire to implement a painful beating on “Stormin’ Norman” come fight night in London on Saturday.

So what has Parke done to these normally mild-mannered lightweights?

“It adds a little bit more spice to the fight. It gets people interested and creates a little more attention.”

It most certainly does. Yet what Parke has done with his trash talk battles has not just garnered his fights more attention, but has also given him the proverbial round one in the mental game that is so important to success at the higher levels of the sport.

“I saw a documentary, and the coach said ‘when you’re training for the fight, it’s 90% just physically training, but once you step into the cage, then it’s 90% mental.’ And I believe that.”

For the former TUF Smashes winner, it’s a realization that has come at the perfect time. Long told by his own coach that he was fighting not to lose and not fighting to win, Parke never took that advice to heart.

“I was stubborn,” he admits. “But I took a step back and said he’s right. Once you go in and say f**k it, you fight the best fight of your life.”

The decision win over Madadi wasn’t the best fight of Parke’s life, but it was a step in the right direction, as he broke a two-fight skid in which he lost disputed split decisions to Gleison Tibau and Francisco Trinaldo. Those losses were the first two of a UFC career that started out with him going 4-0-1, and he felt the pressure stepping into the Octagon in Dublin.
RELATED CONTENT: Norman Parke fighter bio | Matchup: Parke vs. Khabilov | Octagon interview in Dublin

And when Parke hears the Octagon gate shut, that’s when everything becomes real.

“When I’m getting ready for the fight, the whole worry is about losing,” he explains. “You’re not scared of the opponent. But everybody’s got that fear of losing. So whenever you step into the Octagon, you get that feeling in your stomach. You feel like your stomach’s coming up out through your mouth, and you hear the referee say ‘are you ready?’ And then it’s like two buses colliding together and you’re trying to gasp for a decent breath of air. That’s what it feels like. Once you step in there, it’s 90% in your head, so if you’ve got that under control, you’re fine.”

At 29 years old, and with 27 pro fights under his belt, Parke feels like he doesn’t just have the mental game under control, but that it’s one of the strongest tools he has when fighting the best 155-pounders in the world. And with he and his lady welcoming their son Isaac into the world less than two months ago and the family preparing to move into a new home this summer, everything appears to be coming together at the perfect time for the lightweight prospect, who describes the Khabilov fight as “a good opportunity for me where I can go in there and get the job done.”

“There’s a lot on the horizon,” Parke adds. “I can see a clear picture of what’s happening in the future, whereas before, I took everything in stride and never really thought too much about what’s going to happen. But I’ve always got that competitive streak and maybe even a little bit more now because you can see a picture of what you want and you’re not going to let anybody stop you from getting that, so you do your utmost best to get that. It’s added a lot more motivation.”