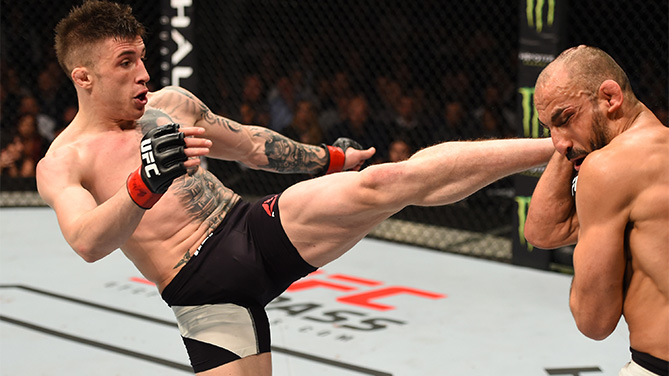 Lightweight prospect Norman Parke snapped a two-fight losing streak in the UFC Fight Night co-main event at 3Arena in Dublin, Ireland Saturday, outpointing Reza Madadi over three rounds that may not have produced the fireworks many expected after the heated exchanges between the two leading up to the bout, but that did the job just fine for “Stormin’ Norman.”

Living up to his “Mad Dog” nickname, Madadi was aggressive in the first round, but he was largely ineffective, as Parke resisted all his takedown attempts and made the Sweden resident pay with crisp stand-up work.

Madadi ate several more punches and kicks until he got a takedown in the second minute of round two, but the Bushmills native worked to get back to his feet as soon as he hit the deck. And thought the ensuing grappling action was evenly matched, at long range, Parke was in total control.

The Swede had success with his striking in the final round, but his insistence on getting the takedown was costing him precious seconds, as Parke’s defense was strong. The Irishman got a takedown of his own with under two minutes remaining, which seemed to be more of an opportunity to get a breather than an offensive weapon. Madadi rose quickly but he was unable to put together a final charge, with Parke ultimately able to secure the win. 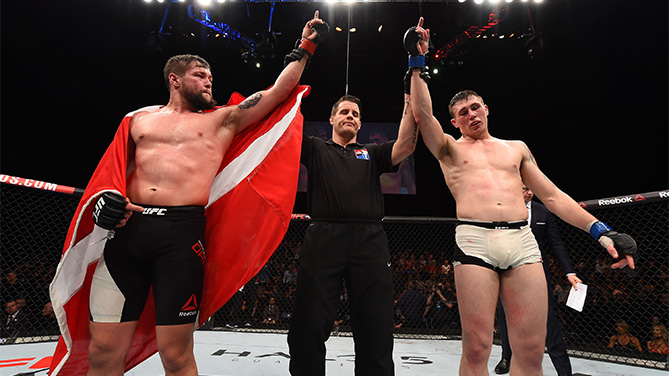 NICOLAS DALBY vs. DARREN TILL

Welterweight prospects Nicolas Dalby and Darren Till entered the Octagon unbeaten and left the same way after three exciting rounds, with Dalby roaring back from what looked like to be a near defeat to nearly stop Till in the final frame and salvage his “0” by way of a majority draw verdict.

The left hand of Till (13-0-1) was the weapon of choice for the confident Till in the opening stages of the fight, and when Dalby (14-0-1) began looking for it, kicks were fired in downstairs, preventing the Dane from getting in close with anything significant. As the final two minutes approached, Dalby was able to clinch briefly, but he was unable to get his foe to the mat or even dent Till’s confident stance. And if anything, Till got even more confident when he dropped Dalby with a left uppercut just before the horn.

Till continued to control the bout in round two, though the “Sharpshooter” did get a brief takedown. Unfortunately for him, the Brazil-based Brit jumped right up and got back to work, scoring at long and close range.

With the fight slipping away, Dalby scored with a left kick to the head early in round three that appeared to jar Till briefly, and that gave the Dane enough reason to push the pace and get the takedown. Till got up quickly once more, but after another left kick upstairs landed, Dalby had changed the momentum of the fight as he looked to finish his bloodied opponent. Midway through the round, Dalby got a takedown and began firing off a series of strikes that went unanswered. Till eventually moved to defend himself, and while he got up to his feet, he was clearly winded and in desperate need of the final minute to go quickly. Dalby kept pressing, scoring with punches and kicks, and while he didn’t finish Till, his courageous comeback drew a roar from the packed house. 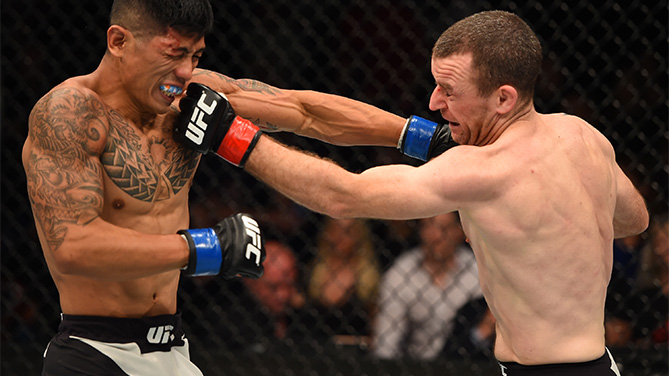 Dublin flyweight veteran Neil Seery got the main card off to a rousing start, submitting Jon Delos Reyes in the second round.

Seery looked as sharp as he ever has in the Octagon in round one, as he picked at Reyes with both hands, clearly looking for an early knockout. Reyes took everything well, scored a takedown, and gave as good as he got, and the fast pace continued into round two, with Seery nearly sinking in a guillotine choke in the second minute. Reyes pulled free and took Seery’s back, but the Irishman calmly worked his way out of trouble and back to his feet. With under two minutes remaining, the fighters engaged in some heated exchanges, Reyes eventually landing a shot and then seeking a takedown. He got it, but the Dubliner had his neck, and Reyes was forced to tap out to a guillotine choke at 4:12 of the second.