Jason Parillo knew Cris Cyborg was special the first time she stepped into his gym over five years ago. Or more accurately, he knew she was special when she put the gloves on and tried to punch holes through the focus mitts he held.

“The first time I put her on the mitts, I could tell she already had natural leverage and natural power,” Parillo recalled. “Being a boxing guy, I’m always excited when somebody’s got a good natural pop to them. We can develop all the other stuff through experience and gym work, but developing that leverage is next to impossible.”

It was that mix of technique, power and ferocity that intrigued the New Yorker, and it confirmed everything he had heard about the fighter whose reign of terror in the Strikeforce promotion had made her one of those rare athletes who can be called by just one name: Cyborg.

But there was more that Parillo needed to see, and he saw it early on in their time together as student and coach, and it never waned.

“When I met Cris, I met a girl that was as determined as any fighter I’ve ever met in my life, male or female,” he said. That determination saw Cyborg making early morning trips from San Diego to the gym and sleeping in her car in the parking lot until the gym opened, even as she held the Invicta FC featherweight title.

“The determination of this girl and her fighting spirit is as good as anyone you’ve ever met in your life.”

That determination led her to three successful defenses of the Invicta FC title and then two more knockout wins in the UFC before she struck gold in July, winning the world featherweight championship with a third-round TKO of Tonya Evinger. The victory, which extended her unbeaten streak to 19, confirmed to the world that among the ladies, there is Cyborg and everyone else. But as she prepares to face Holly Holm for the 145-pound title and the unofficial crown of best female combat sports athlete ever, this isn’t the same Cyborg that first smashed her way into the consciousness of fight fans. That ferocity is still there, but it’s a refined version of it.

“She still has the dragon in her, but she’s patient with it and she knows there’s a time to use it and a time to settle down and be patient and look where you’re going,” said Parillo, whose work with the Brazilian has seen her become more assassin than berserker.

“I still believe she has the ability to blitz people, and even if she went old school Cris Cyborg, she could still be as successful as she is today, because she has that determination, power, leverage and coordination, and she’s got a tremendous beard too. She’s gritty and tough and she can do what she wants, but at the same time she’s very intelligent as well.” 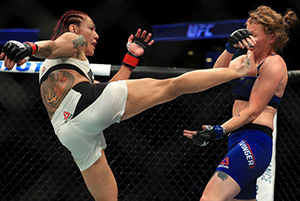 And when he got her to calm down in the Octagon, things got a lot more dangerous for her opponents.

“When you’re calm and settled down, you can see what’s going on,” he said. “You can see those shots. When you’re in fifth gear from first bell to last bell, you’re gonna miss a few shots that were there and get hit with some shots that you shouldn’t get hit with. As good a chin as anybody has, it’s the shot that you don’t see that hurts you. So a big thing was getting her eyesight in there, getting her to know where she was going and how to move on the feet other than just walking someone down.”

It wasn’t an overnight thing, but the change is evident as you watch her progress from 2013 to the present. It’s a mix of Cyborg and Parillo getting on the same page and Cyborg trusting in the results she was getting.

“It was fight by fight,” he said. “And that’s experience too. Each fight, there’s a real system there and there’s a real idea that you’re trying to put into play. And you learn fight by fight and you see it being true, and when you see it being true, you start believing in it, and when you start believing in it, it’s easier to focus on it and listen to it and do it. You’ve got to stay with the concept and the idea that you’re working on, then you’ve got to put it into motion, and the more time you find success with it, the more you believe in it and the more you start owning it.”

Now, days away from the biggest fight of her career, Cyborg may be closing in on becoming a finished product, and if so, the timing is perfect as she looks to stamp her name in the history books as the best ever, something her coach believes is already a fact.

“When you start getting to these higher levels, it’s just inches between everybody’s ability, and it’s the fighter with the strongest mind and the calmest mind and the best eyesight out there that is successful,” said Parillo. “She’s a tremendous athlete and there’s a difference in her determination to be the best fighter on the planet.”