After four pro fights in a little over seven months, Cynthia Calvillo promises that she’s going to take a little break after her fifth this Saturday against Pearl Gonzalez.

“I’m probably going to take some time off, go take a trip somewhere for a weekend, and then get back on it.”

“This is my lifestyle,” she laughs.

That’s a fighter’s lifestyle, and despite her perfect 4-0 record, one that includes a spectacular submission win over Amanda Cooper in her UFC debut last month, and obvious talent, it was an unlikely path for the daughter of Mexican immigrants who wanted her to chase a more conventional American dream.
Get ready for UFC 210: Check out the full fight card | Reasons to watch | Cheat Sheet | Ouch! Feel Rumble's power | DC-Rumble, Weidman-Mousasi ready to fight | Listen: Cynthia Calvillo joins UFC Unfiltered, Katlyn Chookagian | Watch: UFC 210 Countdown | Snoop Dogg breaks down DC ... and Rumble | How to order the PPV

“They worked all the time, and for us, everything was just go to school and come back home,” Calvillo said. “I don’t think they ever really thought I would be an athlete. I’m sure that they wanted me to do something else.”

But from the time she was young, Calvillo had a fearless fighting instinct and she wasn’t hiding it.

“My brothers used to roughhouse with me a lot and I used to play tackle football in the streets all the time with all the boys. So I was a bit of a tomboy.”

“Concrete, grass,” she laughs. “We had to dodge some cars.”

Conventional life would take over for Calvillo, but following a divorce at 23, the longtime UFC fan decided to walk into a gym. She never left. As for her parents, mom is always a nervous wreck on fight night and dad is her biggest fan, but they’re both supportive of a career that began with a blistering 5-1 amateur start.

But in 2014, as she prepared to turn pro, she broke her forearm. Then broke it again, and again.

“I didn’t have the best insurance or the best doctors, so I didn’t really have the best guidance as far as how to deal with that type of injury,” she said. “And so I kept coming back too early. In the span of two years, I broke my forearm three times in the same place. The last time that happened was August of 2015.”

She never wavered from her new love though. 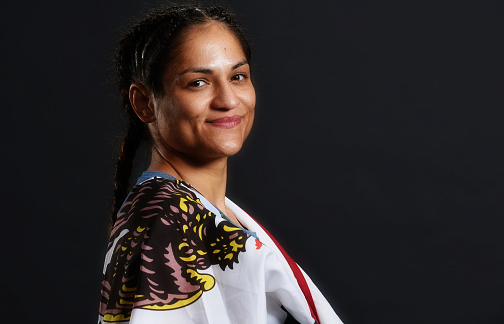 “I knew in my heart that this is what I was supposed to do,” Calvillo said. “I never felt so happy or so at home ever doing anything in my life other than doing this.”

Following the final break, she took a year off to go full blast in the Team Alpha Male gym again, and since returning and making her pro debut in August of last year, she hasn’t stopped, taking fight after fight and winning all of them.

Last month, she finished Cooper in less than four minutes, and now she’s back to face Gonzalez in a UFC 210 main card bout. Needless to say, she hasn’t had time to soak everything in yet.

“I haven’t been able to sit down and look at how much I’ve accomplished in such a short time and where I’m at now,” she said. “I like that because I don’t want to get too much pressure and over analyze. I’m trying to stay really focused on the task, which is the fight itself.”

But what the 29-year-old Calvillo can say about this ride is that she made it, and that’s enough inspiration to pass on to anyone.

“This is definitely what dreams are made of,” she said. “If you have a dream, there’s always going to be adversity and obstacles, and it looked like I was seriously swimming against the current, but if you really believe in something, you can make it happen.”