Papazian Promises to Deliver another Fight to Remember

"I’m a fighter at heart, and I just like to fight; I don’t like to run around." - Jared Papazian 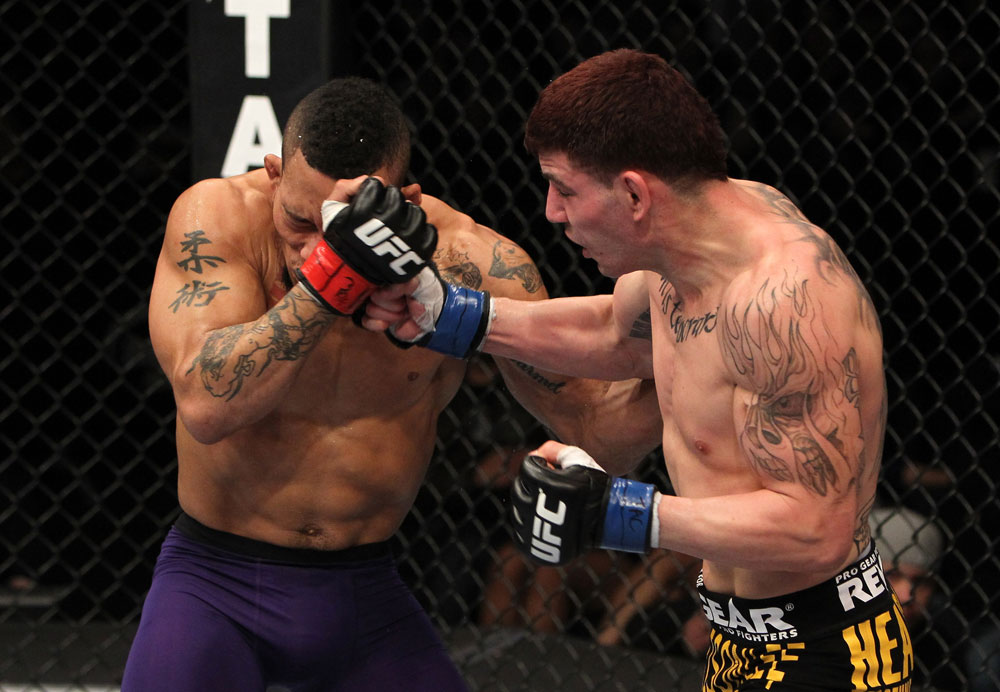 When it comes to UFC debuts, Jared Papazian can hold his head high after a three round slugfest with Mike Easton in January, one that looks even more impressive (despite his majority decision loss) when you factor in that he took the bout on just two weeks’ notice.

Then again, as an Armenian-American fighter, showing up ready to throw down is part of his culture’s code.

“They’d probably cut my fingers off,” joked Papazian when asked what the reaction would be if he came back home to Encino, California without leaving it all in the cage on fight night. “It’s who I am. I’m a fighter at heart, and I just like to fight; I don’t like to run around.”

You can add him to a list of California-based athletes of Armenian descent that have garnered a reputation for being fighters that fight, guys like Karo Parisyan, Manny Gamburyan, Vic Darchinyan, Vanes Martirosyan, and Karen Darabedyan.

“We don’t mess around,” said Papazian. “We just go for the kill, and we have tons of heart. That’s something we all have in common.”

And in response, the community embraces their fighters like no other.

“The thing about Armenians is that they support their fighters and their athletes tremendously,” he said. “They’re behind us, and that’s what’s so different about other cultures. Armenians stick together.”

So expect there to be plenty of them gathered around the television on Friday night when FUEL TV televises Papazian’s second UFC bout against Dustin Pague, one the 24-year old expects will be just as much of a pitched battle as the Easton fight was.

“He (Pague) is a tough, tough hungry kid that wants to make a name in the big show, and he’s doing that,” said Papazian. “He was on The Ultimate Fighter and he made a name there, and now he’s trying to make a name off me, and that’s not what’s gonna happen on June 8th. I’m gonna have my hand raised that night.”

Some felt that Papazian should have gotten the nod in January, and he’s heard such talk, but despite picking up his seventh pro loss (against 14 wins and a no contest), it’s not something that keeps him up nights.

“Everybody, from my family to the fans, they keep coming up to me or are tweeting to me that we should have got Fight of the Night, and it was a really close fight that could have gone either way,” he said. “A lot of people are saying that I should have won, but it’s the fight game, and if you don’t finish, things happen. But I’m just happy, regardless.”

He’s got a reason to be, as his first 15 minute effort in the Octagon showed him to be a welcome addition to the UFC bantamweight class. As for his ability to fight that hard for three rounds on short notice, remember that this is a former King of the Cage champion who has already fought five rounds three times. Yes, three times.

“Some people haven’t even done five fives ever, even in training preparing for a fight,” said Papazian, who has gone 2-1 over the championship distance. “I’ve done it three times in live fights, and every time I’ve done it, I’ve gotten better at it. You just know you have the heart to do it, and it takes you to a different level, mentality wise.”

So three rounds or less? A piece of cake. And that confidence also helped take the first-time UFC jitters out of the equation when he stepped into the Octagon to meet Easton.

“I have a lot of cage experience, a lot of ring time, and I think that played a factor,”
said Papazian, a pro since 2008. “Also, my whole goal was to get in the UFC, and it’s like, why have those jitters? I’m here; now it’s time to run with it. I was just gonna put on a show and have a good time. Some people come in ‘oh my God, it’s the big show, I’ve never fought on a big stage like this before,’ and they freak out and they freeze. I do the complete opposite. When I fought in the smaller shows, I didn’t want to make a mistake because I wanted to get to the UFC. If I made one mistake, he might catch me, and I don’t get there. Now I’m in the UFC, so I don’t have to feel pressure. Now I can just have fun.”

And for him, part of the fun is a little pre-fight gamesmanship. He got into to it pretty heavily with Easton, and while things have been calm and respectful between him and Pague, it’s not fight night yet.

“I’m all about the staredown-type thing and getting into my opponent’s head,” said Papazian. “This whole game’s a mental game, and once you break them mentally, everything physically doesn’t matter anymore. So once I arrive in Florida, I’m gonna start picking his brain and getting in there.”

If he does – and probably even if he doesn’t – the stage is set for another memorable Jared Papazian bout. Hey, it’s what everyone expects now, and he doesn’t intend to send anyone home disappointed.

“That’s what I’m all about,” he said. “When I was in smaller shows, I pretty much got Fight of the Night every single time if they had a bonus. That’s what I do – I come to fight. I don’t lay and pray, and if you want to compare me to a fighter, I have the same philosophy as Leonard Garcia when it comes to style in the 135-pound division. That’s how I would see myself. He always brings it, and I’m the same way.”