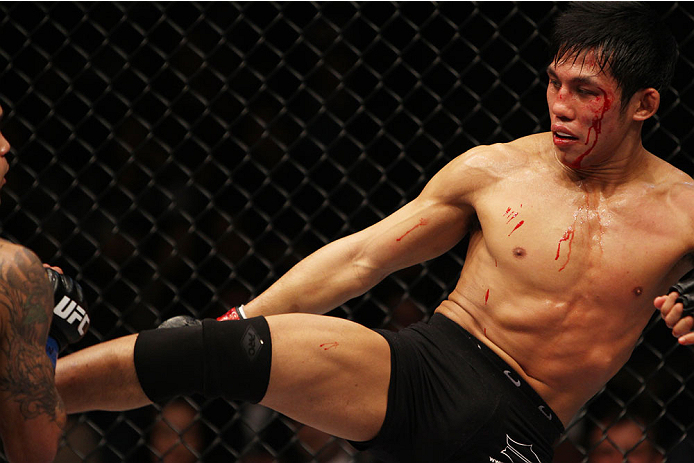 Nearly 15 years after playing host to UFC 29, the Differ Ariake Arena is the venue for Pancrase 270, an event featuring 14 bouts, headlined by a pair of championship contests, including the main event, where competitors that were teammates during Season 12 of The Ultimate Fighter square off.

Five years ago, Phan and Main were lightweight hopefuls on Team Koscheck opposite Team GSP on TUF, but their paths diverged once the cameras stopped rolling.

Main, who was selected one spot ahead of Phan as the teams were chosen, was submitted in the elimination round and never got the chance to compete in the UFC Octagon after the show. The 26-year-old New Jersey native has gone 5-1-1 since appearing on the long-running reality TV competition, including a 3-0-1 mark under the Pancrase banner to earn his championship opportunity.

After making a name for himself as a tough out on the California regional circuit, Phan advanced to the semifinals, ultimately losing to current lightweight contender Michael Johnson. He would compete eight times under the UFC banner, picking up Fight of the Night honors while splitting a pair of bouts with Leonard Garcia.

Following a first-round submission win over Yuki Baba in his promotional debut, Phan claimed the featherweight King of Pancrase championship with a split decision win over Takumi Nakayama back in January and looks to successfully defend his belt for the first time here.

In the co-main event, reigning welterweight King of Pancrase Gota Yamashita (10-3) squares off with Shingo Suzuki (12-8) for a second consecutive time after suffering a second-round stoppage loss to the challenger at Pancrase 267 in May. The 26-year-old Yamashita had won four straight prior to being upset by Suzuki last time out, all by way of decision, while the journeyman challenger, who has only gone to the scorecards twice in his career, has picked up consecutive stoppage wins to earn his crack at the title.

The remaining 12 bouts offer an eclectic mix of inexperienced fighters beginning their mixed martial arts journeys, seasoned veterans like Shunichi Shimizu, Kosei Kubota and Eiji Ishikawa, who have 185 fights combined, and a trio of intriguing Americans, including a pair that make the trip to Tokyo to face one another.

A protégé of the last man to earn a victory in the UFC Octagon, “The Warmaster” Josh Barnett, Victor Henry is a 28-year-old California native with a 10-1 record and an intriguing upside.

Henry has recorded four consecutive victories after tasting defeat for the first time, including a second-round technical knockout victory over Hideo Tokoro and a third-round submission win over veteran Masakatsu Ueda.

In his last outing, the Combat Submission Wrestling (CSW) product earned a split decision win over Taichi Nakajima in his Pancrase debut. Sunday, Henry looks to run his winning streak to five opposite Hidekazu Fukushima, who has also won four straight and each of his previous Pancrase appearances.

Before Henry steps into action, his teammate Colleen Schneider (8-6) will step in against “The Pink Ranger,” Bryanna Fissori (2-0) in a women’s bantamweight matchup.

Schneider is a tough out who has gone 7-2 after starting her career with one win in her first five appearances, with those two setbacks coming against Invicta FC standouts DeAnna Bennett and Irene Aldana.

While Schneider has crossed the threshold into the cage on 14 occasions, the 30-year-old Fissori is still in the early stages of her career. Wearing a pink gi earned the Hawaiian her Mighty Morphin nickname, and after picking up a technical knockout win in her professional debut last October, Fissori collected a unanimous decision victory in her sophomore outing, setting up this encounter with Schneider.

Barnett will be in the corner of his fellow Erik Paulson trainees on Sunday, having stayed in Tokyo following his unanimous decision win over Roy Nelson last weekend at the Saitama Super Arena.

In between those two contests, UFC Hall of Famer and former King of Pancrase Bas Rutten’s protégé Dominique Robinson (9-4-2) will make his promotional debut, taking on the aforementioned Ishikawa (27-21-3).

The 33-year-old Robinson enters on a two-fight winning streak spaced 18 months apart, most recently beating former UFC lightweight contender Joe “Daddy” Stevenson in January. Meanwhile, Japanese veteran Ishikawa looks to rebound from an August submission loss while welcoming “The Fallen Angel” to Pancrase, where he has collected 29 of his 51 appearances.