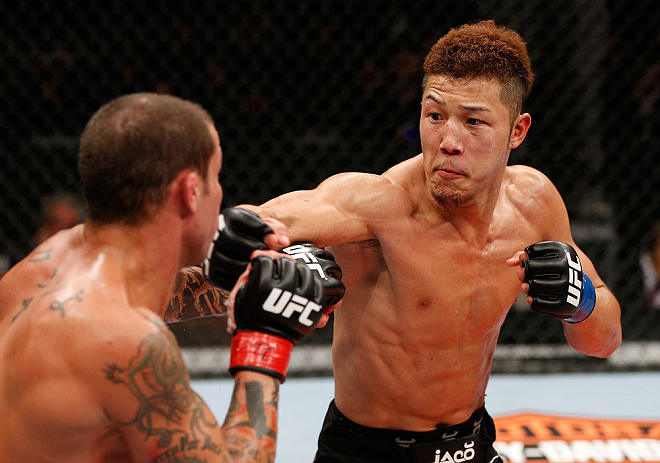 Less than a month after their last event, Pancrase is back with another deep fight card. While the last show in Differ Ariake was headlined by a pair of former Ultimate Fighter teammates (Andy Main and Nam Phan from Season 12), the main event for this weekend’s show features a respected Japanese veteran taking on a man seven years his junior looking to earn his third straight victory in a battle for the vacant King of Pancrase lightweight title.

Anyone that has followed Japanese MMA over the years knows the name Satoru Kitaoka. The 35-year-old will be competing for the 60th time on Sunday and has faced a talented assortment of opponents over the years, including Kurt Pellegrino, Carlos Condit, Paul Daley, Takanori Gomi, Jorge Masvidal and Shinya Aoki. Kitaoka is a true specialist – 17 of his 37 wins have come by submission and the remaining 20 have all been decisions – and enters this bout having won five straight while boasting an extensive 23-8-8 record under the Pancrase banner.

He’ll face Kazuki Tokudome, who has picked up consecutive victories over Yoshihiro Koyama and J.J. Ambrose since returning to the promotion following a 1-3 run in the UFC. After defeating Cristiano Marcello by unanimous decision in his Octagon debut, the 28-year-old Tokudome dropped a unanimous decision to Norman Parke and a split decision to Yui Chul Nam before being choked out by lightweight prospect Johnny “Hollywood” Case, who returns to action next weekend against Yan Cabral in Sao Paulo.

In the co-main event of the evening, long-reigning flyweight King of Pancrase champion Mitsuhisa Sunabe takes on the man he defeated for the title four years ago, Horiyuki Abe.

Unbeaten in his last 12 fights, the 36-year-old Sunabe appears as dangerous as ever. In March, he earned a second-round knockout win via head kick and then in July, he submitted Takafumi Ito less than 30 seconds into the third round to retain his title. Abe is a 38-year-old veteran – not to be confused with the 45-year-old fighter of the same name who runs the Abe Ani Combat Club – who has won three straight to earn this rematch with Sunabe.

In addition to the tandem title fights, there are several other bouts scheduled for the 19-fight show on Sunday that features names that will be familiar to seasoned fans, plus a few new ones to keep tabs on. Here’s a look at some of the other fighters of note competing at Pancrase 271.

Masakatsu Ueda (19-4-2): the 37-year-old bantamweight hasn’t slowed down and competes for the third time this year. Fresh off a win in his Pancrase debut, the veteran, who boasts wins over Kyoji Horiguchi and Rumina Sato (amongst others), Ueda looks to pick up his 10th win in 14 fights when he faces off with…

Fabiano Silva da Conceicao (26-6-1): also known as “Jacarezinho” (Little Jacare), the 26-year-old Brazilian is an X-Gym product, just like his namesake, and has gone 10-1 over his last 11 fights, including winning three straight heading into this one against the veteran Ueda.

Rildeci Lima Dias (19-2-0): nicknamed “Escorpiao,” the 29-year-old Brazilian has won seven straight and 17 of his last 18 after starting his career at 2-1. He picked up a third-round submission win in his Pancrase debut back in July and has 17 finishes in his 19 career wins, so don’t expect his appearance Sunday to go to the scorecards.

Yuki Kondo (57-30-9): That’s not a typo – Kondo will be competing for the 97th time in his professional career when he steps in against Kenji Kawaguchi this weekend. The 40-year-old has lost his last two outings and is 4-4-1 over the last three years, so clearly his best days are behind him, but the 47-year-old Kawaguchi hasn’t fought since 2006, so this should be an even matchup between two veterans looking for one last triumph.

Akitoshi Tamura (19-16-2): Tamura had a cup of coffee in the WEC, going 1-2 with a win over former bantamweight title challenger Manny Tapia, but he’s been a mainstay in Japan since then, including a 2-2 run in Pancrase heading into his bout Sunday against Kyosuke Yokoyama. “Ironman” is tough to put away – he’s only been finished four times in his career – so you can count on getting your money’s worth when he steps in to compete.

Hiromitsu Miura (9-6-2): Like Tamura, Miura is familiar to North American fight fans from his days in the WEC, where he challenged Carlos Condit for the welterweight title in a wildly entertaining bout that you should definitely check out on FIGHT PASS once you’re done reading this. Following his loss to Condit, Miura fought once more before turning to boxing, starting 9-0 before losing his last bout. Now the 34-year-old has returned to mixed martial arts, competing in Pancrase for the first time in over a decade.