An injury-ridden layoff hasn't deterred Paige VanZant, and she is aiming to remind fans exactly what she can do in the Octagon.
By Zac Pacleb, on Twitter @ZacPacleb • Jul. 8, 2020

Strictly based on social media presence alone, there isn’t a single athlete on the UFC roster enjoying the extra downtime that the coronavirus lockdown provided more than Paige VanZant and her husband Austin Vanderford. From making TikTok videos to training in their home gym, they’ve maintained their frequent presence online amidst the pandemic, and while the circumstances around the extra time together are certainly less than ideal, they’re enjoying the opportunities, nonetheless.

“Just staying home for the past few months has been so amazing for our relationship,” VanZant told UFC.com. “We just made it really fun and, at the same time, we both really encourage and inspire each other, so we’ve been working extremely hard. We love sharing our lives with everybody, so it’s been really cool.”

Beyond the image of Paige VanZant the celebrity, though, it’s easy to forget about Paige VanZant the mixed martial artist. Sure, a good share of her posts shows her training, but since December 2016, “12 Gauge” has just two fights under her belt and understands if the general public might count her out in her upcoming fight against Amanda Ribas. In fact, oddsmakers have VanZant as the steepest underdog, according to Bovada.

“The majority of my career, I’ve been at the very top of my game,” VanZane said. “I signed to the UFC when I was 19 years old, so I know how successful I’ve been. I have five UFC wins, four of those are finishes. The one (loss) I broke my arm in it, and the other fight I lost to Rose (Namajunas), who is a champion. I know how tough I am, and I don’t think that my opponents necessarily count me out because I think they’re smarter than that. It’ll take a while to really win the fans over, but I think it just doesn’t matter. I just keep fighting on.”

Part of her long journey back to the Octagon included several setbacks with that broken arm suffered against Jessica-Rose Clark. Since then, she has come up against several surgeries, re-breaks and setbacks that kept her out of action.

While that amount of issues with one body part might make a person rightly doubt whether it could take the punishment required to compete, VanZant’s confidence didn’t waver. Having the sport continuously taken away from her allowed her to really miss fighting, training and the grind that comes with it. Even though the injuries have been a consistent through line for the last few years, VanZant isn’t shying away from the conversation. In truth, she’s not tired of talking about it, either.

“It’s definitely a part of me,” she said. “I think it’s something that I can honestly say, ‘I know how tough I am,’ and you can never take that away from me. I shattered my arm in the middle of a fight and still won the entire third round with a shattered arm, and I think it’s something that I know going into another fight that if I were to have another serious injury, I’m not a quitter. You’ll never see me quitting because something hurts or I’m asking for a way out of the fight. It gives me a lot of mental toughness and mental strength to know I never have to question that.”

Part of her getting past the injury, mentally, came from the fact that the injury was self-induced. An attempted spinning back fist caused the initial fracture and adjusting her habits in order to keep from it happening again is something with which she is comfortable. The break itself is in the middle of her arm instead of somewhere more regularly in danger like her elbow, something for which she is grateful. VanZant also cited Vanderford as a big help in keeping her mentally strong during the ebbs and flows that come with recovery and the fight game.

“I’ve gone through so much in my life, in my fighting career, that I have absolutely no fear going into this fight,” VanZant said. “None at all. That’s something that I pride myself on, and my husband - him cornering me and watching me fight – I always wish I had some of the skill he has, but he says he always wishes he could have my fearlessness. I go into those fights, and I’m not scared. I’m not nervous. I just go out there and do what I feel like I’m meant to do. I’m fearless.”

With all of the delays and setbacks, VanZant is set to take on Ribas in the first main card bout on Fight Island, and she couldn’t ask for a better situation in which to return. 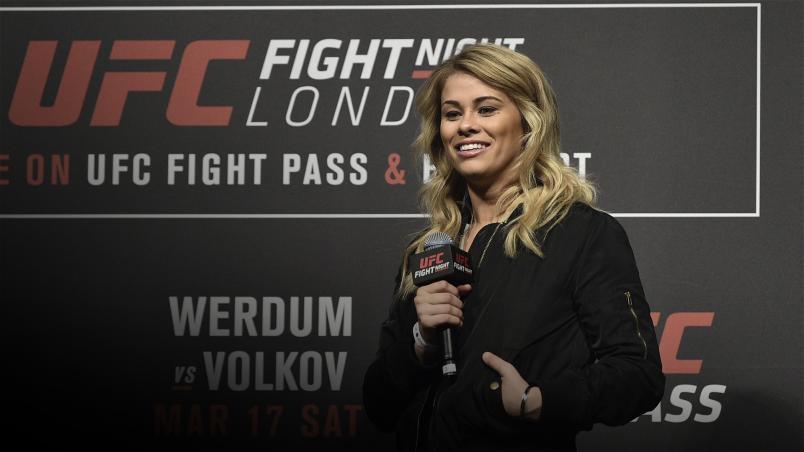 “It feels right,” she said. “This is my comeback fight. This is the card I wanted to be on. Through all these injuries, my big win in January 2018, it feels good. This feels right. This is the fight that I’m meant to go out on, and I’m so excited to put on a performance, and it just couldn’t be a more iconic moment for me coming together and where I am in my career right now.”

Part of that quote seemed like a Freudian slip. Could VanZant, still just 26 years old but open about her ventures outside of the Octagon, be contemplating retirement following this long-awaited fight?

When I follow up and ask her, she doesn’t say yes. She doesn’t say no, either. But there’s certainly a worry-free tone to her answer that one could argue is well-earned when considering her journey back to competition.

“I don’t know where my career lies,” VanZant said. “The future is in so many other people’s hands, and I’m excited to see what happens. I have no idea what’s going to happen in my future, and it’s really exciting. It’s kind of, to me, an exciting, monumental time that after this fight, my life could change.”