Paddy Pimblett Is Showing Up Right On Time

Liverpool's Paddy Pimblett Always Knew He'd Get To The UFC, And He Makes His Long-Awaited Debut At UFC Fight Night: Brunson vs Till
By Thomas Gerbasi, on Twitter @tgerbasi • Sep. 2, 2021

More than most, Paddy Pimblett played his cards perfectly. Sure, there would be ups and downs in his pro MMA career, but once the Liverpool native made it to his September 2018 bout against Soren Bak in his hometown Echo Arena, he assumed he was one win away from the UFC.

He had turned down the biggest promotion in the world twice before, feeling that he still had some work to do to be UFC-ready. Plus, Cage Warriors was treating him well, allowing him to change not only his life, but the lives of those around him.

“Those wages bought me a house with my fiancée, paid my mother's mortgage off and I helped my sister get a new kitchen, so I've done a lot with that money and that's why I'll always be thankful to Cage Warriors, because they helped not just me, but my family as well,” said Pimblett, who also needed hand surgery and had a vacation booked with his then-girlfriend the week the UFC made their first visit to Liverpool in May 2018.

Photo Gallery: Paddy Pimblett Trains Ahead Of His UFC Debut

So he waited, fully confident that he would beat Bak, pick up another CW belt, this one at lightweight, and then invade the UFC.

“For me, it was always a question of when I'd get signed, not if.”

Soren Bak had other plans, winning a five-round unanimous decision and sending Pimblett crashing down to Earth. He was devastated, assuming that he blew his UFC shot once and for all.

“When I lost that fight, I had a bit of mental health problems and I got very depressed,” Pimblett admits. “I thought that life was never gonna get better, to be honest. Every morning after that fight, I'd wake up, my missus would get up and give me a kiss and go to work and when she'd go to work, nine times out of ten, usually before that fight, I'd roll over and go back to sleep. After that fight, I was sitting there and I was crying for an hour and just thinking to myself that I ruined my life, that I should've went to the UFC, and it's not gonna happen now.”

For someone so outwardly positive, giddy almost, it’s surprising to hear, but the fighting blood runs deep in Pimblett, and he slowly, but surely, worked his way back to being the old “Paddy the Baddy” again, complete with some needed changes. 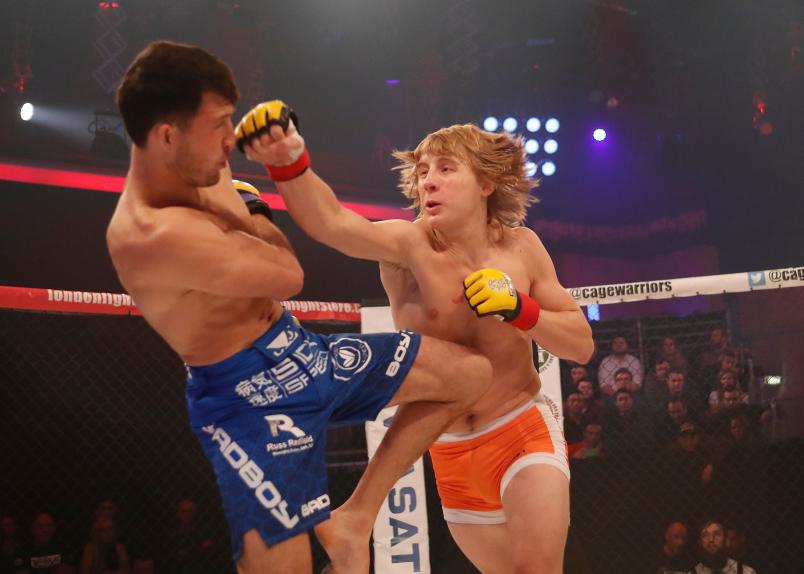 “Obviously, I got out of that dark phase in the next few months with the good people around me - my fiancée, my family, my gym family and my close friends,” he said. “I got rid of all the 'yes' men in my life that were bringing me down, getting me out partying all the time and stuff like that. And I sorted my head out and started to speak to people. I'm in a stronger place now, mentally and physically. When I look back now, the 26-year-old me would absolutely kill the 21-year-old me. And the 26-year-old me now would kill the 23-year-old me that got an offer in 2018. Now I'm a man. Back then, both times I got an offer, I was a boy. I was still a child.”

This man is also a UFC fighter, about to make his highly anticipated debut this Saturday in Las Vegas against Luigi Vendramini. To get here, Pimblett had to shake off the Bak loss, and he did just that, scoring a pair of first-round finishes over Decky Dalton and Davide Martinez that got him the call that he accepted. And now, all eyes are on him, and even though he’s far away from home, he’s not surprised that the buzz keeps getting louder and louder as fight day approaches.

“No, it hasn't surprised me at all,” he said. “I saw this coming. I saw all this in my future, and I know my destiny, I know what's coming. I'm going to be the biggest star in this sport on the planet. I just know it and I've seen it in my future already. I'm gonna win this fight and my following's going to quadruple. Everyone's gonna know who the Baddy is. They say there was Brock, then there was Ronda, then there was Conor. And people are gonna say now there's Paddy the Baddy.”

Brock Lesnar. Ronda Rousey. Conor McGregor. That’s lofty company for the lightweight prospect to put himself in with. But as Wayne Gretzky put it, you miss one hundred percent of the shots you don’t take. So, in addition to what he can do in the Octagon, what does the 16-3 Pimblett believes he brings to the table that will make him a star beyond the shores of England? 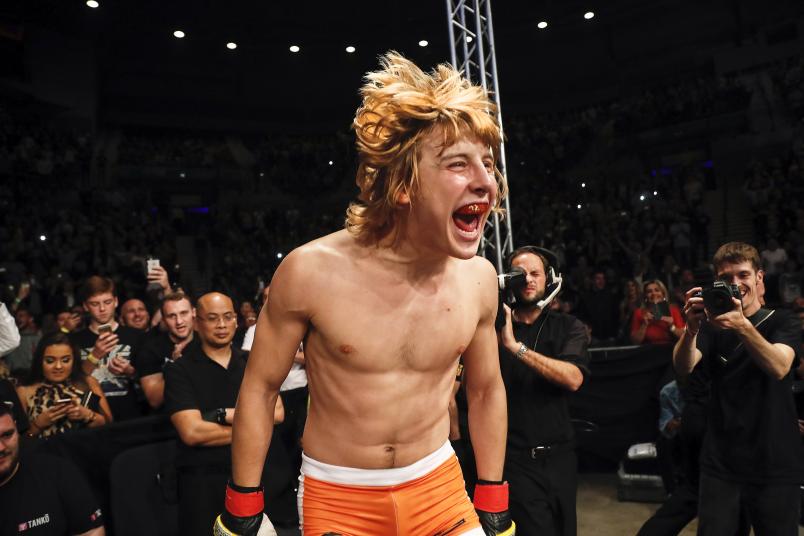 Paddy Pimblett Gets Ready For His Cage Warriors Bout

It’s why he can be honest about the dark times after the Bak fight and even about turning down a UFC contract.

“I'm ready now,” Pimblett said. “Back when I first got offered, I wasn't ready. I'll be honest. But when I got the first offer, I was 21, I thought I was a world beater - I was on an eight-fight win streak, I only lost one time at bantamweight, and I thought I was unstoppable. I was gonna go to the UFC the original time and I'm so glad that I didn't now, looking back.”

Maybe it’s true that everything happens for a reason, because Pimblett is here and only looking forward and up. He won’t be satisfied with being on the UFC roster or just winning a world title. He wants everything the sport can bring to his door, and he wants to follow in the footsteps of some of his own sporting heroes.

And while we’re on that subject, a look at Pimblett’s list of heroes on his official UFC bio will show that even though he’s a young man, he’s got an old soul and a respect for those that came before him. And not just those who came a few years before him.

Roger Federer, Steven Gerrard, Jamie Carragher, Ayrton Senna, Michael Jordan, Mane Garrincha and Minotauro Nogueira. It’s an eclectic group for sure, especially beyond Liverpool footballers Gerrard and Carragher, but when he talks about them, it all makes perfect sense. 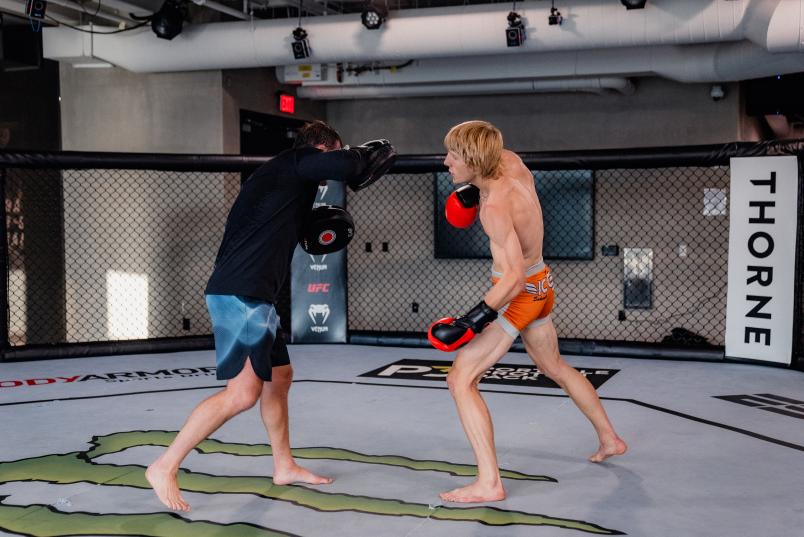 “Mane Garrincha, ‘The Joy of the People,’ that's what I see myself as, because he always put on a show, and that's what I always do,” he said of the Brazilian soccer legend. “Whether I win or I lose, I'm always in an entertaining fight. You'd see him, and he wouldn't go to training some days and he'd be playing footy with his mates in the park with no shoes on. It's the same with Big Nog, someone I always compare myself to, because I always say that I've got heart like him, and I can take a beating up until any point in a fight and I won't give up and I'll keep coming and I'll catch you in something. Federer is one of my sporting heroes because he's the man. He plays with finesse in everything he does and he's such a nice dude. Michael Jordan, his intensity. He didn't let anyone take anything from him. If anyone said anything to him, he'd be right back at them. And obviously Senna, as well, because he was another man of the people. He never forgot where he came from, just like Garrincha. He never, ever got too big for his boots, and that's what I'm gonna do in my city. I'm gonna do everything I can for my city, Liverpool, while I'm on top. I'm gonna do whatever I can to make this city a better place to inspire the kids of this city.”

Pimblett does have his detractors, mainly those who dislike anyone who is confident enough to call his own shot, as well as those who simply like to troll the successful. But it’s clear that more people are in his corner as he begins the most important chapter in his career, and he’ll be thinking of both groups as he prepares for battle on Saturday.

“I appreciate every little bit of support I get,” he said. “It means the world to me. I know it's not just Scousers, as well, it's not just people from my home city. It's people from England, people from the UK, and people from all different countries. I have messages from people in Australia, America, Canada, Sweden, Poland, Germany. I got messages from people from all over the world and I try my best to respond to them. So I'm looking forward to this so much, I really am. People were always asking, ‘When are you going to UFC?’ And some people say, ‘He's not good enough.’ I can't wait to say to those people when I win on Saturday, I told you so. But even more, I can't wait to prove the people right who backed me the whole time.”