"The Baddy" Sets His Sights On Conquering Las Vegas And The Lightweight Division
By Steve Latrell, on Twitter: @TheUFSteve • Dec. 6, 2022

Even when he’s just sitting in the crowd, enjoying a fight night that doesn’t involve him, Paddy Pimblett has big “all eyes on me” energy.

Even before the cameras pan to show him on the big screens inside the arena, the familiar chant of “Oh, Paddy The Baddy” to the tune of The White Stripes’ “Seven Nation Army” start to ripple through the crowd. With just three UFC fights under his belt and still sitting outside the Top 15 lightweight rankings, the fact is undeniable: Pimblett is a star.

“I felt bad in San Diego, to be honest. When I walked out into the crowd and there was a fight actually happening and everyone started screaming for me, I actually felt bad for the two fighters fighting. But what can I say? That's the star power. I just draw people to me.

“I think people can relate to me. I'm not a little knucklehead, pure tattoos like all these other people are. I look like the boy next door. So people can just relate to me and I bring an energy that no one else can bring. It's as simple as that.”

That intangible charisma—the kind you can’t describe, but you know it when you see it—coupled with a stellar product inside the Octagon, keeps his star ascending…and rapidly.

2022 has been a banner year for the former Cage Warriors champion, who recorded two huge wins at London’s O2 Arena, both rear naked choke submissions, both garnering Performance of the Night bonuses. And if you think the cheers are loud when he’s in the audience in places like San Diego or Phoenix, there are few words to describe the electricity of the UK crowd when their native son is getting his hand raised.

See Which Fighters Are On The Rise At UFC 282: Błachowicz vs Ankalaev

We’ll find out Saturday if the Las Vegas crowd can handle the next British Invasion when Pimblett meets Jared Gordon in the co-main event of UFC 282. Pimblett made his UFC debut in Vegas during the pandemic at the UFC APEX (another Performance of the Night versus Luigi Vendramini), but this will be his proper introduction to the “Fight Capital of the World.”

And as he mingles with media and his small entourage of friends at the UFC Performance Institute, rarely has a fighter ever appeared more ready for the moment. Not even the trans-Atlantic travel has seemed to have an effect on him.

“No, travel has been sound on me, lad. I stayed awake for the flight. So when I got here, I went to sleep in the nighttime about 11:30, 12:00 o’clock. The next day, woke up at 7am. So my sleeping patterns been cool, to be honest. I haven’t had to worry about no jetlag. It’s when you go forward in time, when I go back to the UK, that's when jet lag kicks you in the face.”

If there’s any face-kicking to be done, it will start Saturday. For now, Pimblett is just soaking it all in.

“I feel great. Absolutely amazing. Weight has never been so good. I've never been hitting so hard and so precise and feeling so on-point. I actually feel sorry for Jared for what I'm going to do to him.”

Gordon, a veteran opponent that Pimblett’s countryman Michael Bisping has warned is “no walk in the park,” has suggested that he’ll find and expose the “quit” in the Liverpool native.

“I like him as a human being. I respect him. He's doing great things,” Pimblett says of Gordon. “But as an opponent, he’s not on my level. I can’t believe he's saying I'll quit. It's embarrassing. I've never quit in my life. I’ve went five fives twice: once sick, once with a broken hand and I’ve been choked unconscious. He's the one who taps. He taps. End of. Don't call anyone a quitter when you tap, little *****.”

So where does he rank Gordon against his previous competition?

“In the UFC? Probably about the third best opponent, I think Luigi Vendramini knocks him out and I think Jordan Leavitt submits him.”

Regardless, it’s the fight that fans have been circling on the stacked card since the moment it was announced.

Ah yes, the food. Pimblett is almost as famous for his post-fight culinary indulgences as he is for the victories that he’s celebrating. With the holidays right around the corner, it was crucial to get the dieting and discipline out of the way now. 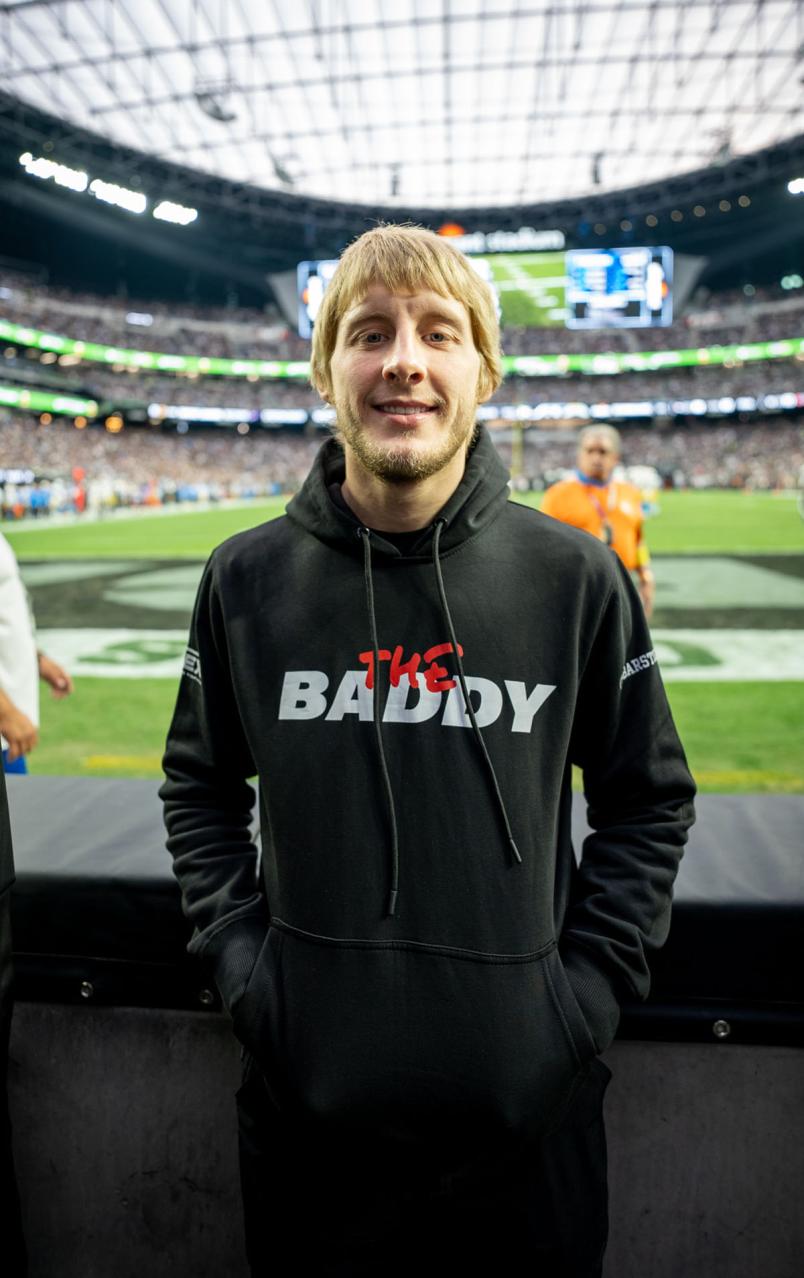 “Oh, yeah, definitely important to fight before the holidays. I'm not there in these January cards. You've got no chance of  me doing one of them January cards.”

But a victory Saturday does put Pimblett on track for a happy new year (after January, of course).

“It sets me up well for 2023, obviously. He's got a good ranking. He’s 4-1 in his last five. Even though he quit in that loss against a crab who is terrible [Ed. seemingly referring to Grant Dawson], who got beat in two rounds. And then before that, he got beat by former champ Charles (Oliveira) in the first. So that's what I plan on doing: come on out and finish him in the first round because I aspire to be champion one day. So the former champions finish him in one. I'm going to finish him in one.”

The lightweight belt is certainly foremost on Pimblett’s bucket list, but he’s keenly in touch with how the size of his platform can help those in need; those close to him, as well as society more broadly.

“I want to provide a living for my family. I want everyone in my family to be able to eat for the rest of the lives and not have to worry about people, not have to worry about going to work and stuff. I also want to help people outside the cage. Especially after what I said after my last fight: men's mental health is a big thing to me. Helping young kids is a big thing to me. So it's not just about fighting in the cage. It's about helping other people. It's nice to be nice. It's good to give back.