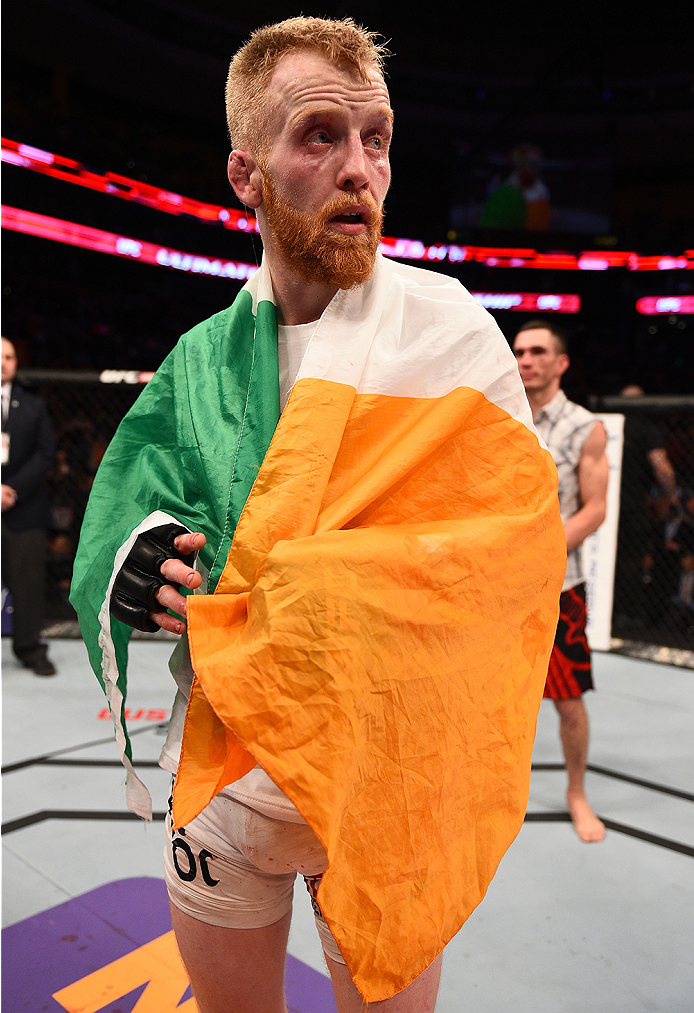 When speaking about his Saturday matchup with Vaughan Lee in Glasgow, Scotland, Paddy Holohan sighs, almost unhappy at what he’s about to say.

“That’s a hard call, a bitter pill to swallow,” he begins. “I’m 27, I’m coming up, and I’m a bad guy to meet at this moment. I’m very hungry, I’m part of a pack where no Irish guy has been finished in the whole UFC apart from Tom Egan. On the night, none of that matters, whether he (Lee) has been out a year, whether he’s been knocked out. But as I’ve always heard Conor (McGregor) saying, and I believe in it myself, it’s very hard to get the chin to recover after getting knocked out like that. Sometimes when that button gets turned on, it never turns off again, and I hit hard, I hit really, really hard.”

Holohan is referring to Lee’s last bout in May of 2014, a 25-second knockout at the hands of Iuri Alcantara. “The Hooligan” believes it won’t be his last, but it’s not something he’s celebrating, especially since he worked with Lee briefly when he visited Dublin’s SBG Ireland gym a few months back.

“He’s a good guy,” Holohan said. “And I don’t take anything for granted. I’ve been training my ass off and been doing everything right.”

And this is part of the business, regardless if someone is a good guy or not. Holohan is a good guy, but if Vaughan sees the opening to finish him, he’ll take it. Such is the fight game, and though Holohan may be sympathetic to a foe’s plight before fight night, when it’s time to close the Octagon gate, there will be no mercy.

That’s always been the role for Holohan among his teammates, four of which – Conor McGregor, Gunnar Nelson, Cathal Pendred and Aisling Daly – are members of the UFC roster. It’s his job to inspire, to set the stage for the night, and there was no bigger stage for him to do that on than on July 19, 2014, when he was first out of the fate for the Irish contingent in their home city of Dublin.

“It could have been a nightmare,” he admits, knowing full well that if he lost to Josh Sampo that night, a dark cloud would have fallen over the O2 Arena. But Holohan won, submitting Sampo in the first round, and the crowd went crazy, setting the tone for a night in which all his teammates emerged victorious.

“I told them to trust that, that I will set the tone,” he said. “I’ll be the first one on that battlefield in Dublin, and I’ll be standing there when the last one gets off.”

It’s why Holohan is considered the team berserker, and when it comes to pressure, he feels none.

“I don’t really deal with pressure and I don’t add that stuff,” he said. “I go out there and I fight for me, I fight for my team, I know what I’m capable of, and it was great to set off the atmosphere the way it was in that stadium. But I never think of these pressures, and it’s the same with the next fight. It will just be a distorted face and I will be trying to get him out. It’s a different guy that’s in there. It’s not a normal Paddy Holohan that goes into that cage. It’s someone that’s prepared to die.”

Ominous words, but when you came up hard like Holohan, fighting is a metaphor for life, and he is willing to dig deep and go further than most to make sure he doesn’t lose his spot, and to guarantee that his son doesn’t want for anything. Yet as serious as his intentions in the Octagon can be, outside of it, he tries to look at life through a different lens.

“I come from a place in Dublin called Tallaght,” he explains. “It’s rough and it’s wild and all the kids are born rough and ready. We learn from each other and we fight each other and you learn a lot from that. I had to grow up really quick as a kid. It was just me, my mother and my sister here and I became very streetwise very quick, and it made me not take things too serious. You can’t take life too serious – no one’s getting out alive. That’s the main thing to me. I just happen to have a job now where I fight guys in cages, and if it was an office job or something like that, maybe I wouldn’t be expressing myself the way I am now because this is who I am.”

And his way of expressing himself and showing his personality to the world has made him a fighter on the short list of future stars in the sport. His fanbase grows with every fight, and it’s not just because he’s won two of his three bouts in the Octagon. It’s because this flyweight has a heavyweight heart.

“I think that people realize, and especially when they meet me and talk to me, that I am one of them, especially over here on this side of the world,” Holohan said. “I’m a normal guy that’s walking down the street, a normal guy that sometimes just gets the bus because he doesn’t want to drive that day. I never really cared about what people think, and I never really tried to blend in with the crowd and follow the leader, so I think people admire that.”

After the year that Paddy Holohan had, few could claim the same thing. But “The Hooligan” is unlike any other fighter.

“I’m grateful every day for where I am in my life and with my team,” he said. “I’ve met a lot of really cool, interesting people along this journey and I live with no regrets. I fight with my heart on my sleeve and I’ll be in there until the final bell. That way, you can’t lose. The people will always stand behind you, and even if you do fall, here in Ireland, they will catch me, and that’s the way I always look at it.”