“The UFC fans, all they’ve seen is that knee. But in this upcoming fight I’ll be able to display
more of my tools.” - Pablo Garza 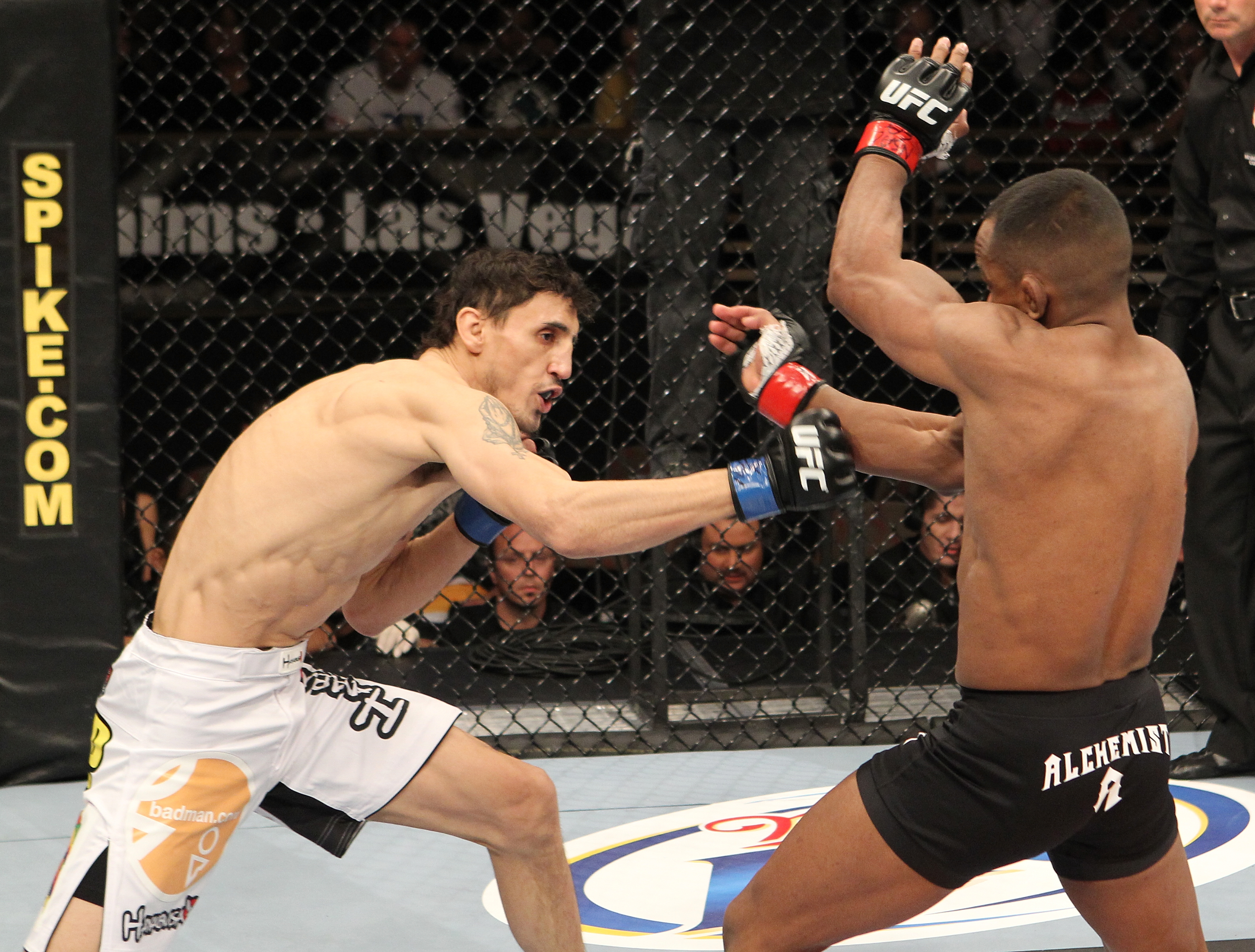 Sacrifice comes in many forms for mixed martial arts fighters. There’s the time away from family and friends, the physical pain and mental strain endured, and dealing with the idea that the only way to move forward is by breaking yourself down on a daily basis.

Pablo Garza is familiar with all that. Then he goes the extra mile. Or extra 75 miles to be exact.

That’s how long the featherweight prospect travels from his home in Grand Forks, North Dakota to Fargo, where he puts in the hours necessary to keep up with his peers in the one of the most competitive divisions in the sport.

But that’s on a good day. On bad ones, which he has experienced plenty of in preparation for his UFC 129 bout against Yves Jabouin, that 150 mile round-trip turns into 180 miles.

“Flooding is kicking in so I can’t even take the Interstate to practice,” he explains. “I have to go around this big detour where there’s nothing but backwoods and fields and it turns a 75 mile trip into a 90 mile trip. It’s pretty frustrating, but I think that’s where I get the mental toughness. Not a lot of people do what I do to get to practice.”

True, and that’s not even counting the five hour trips he’s been taking to the Minnesota Mixed Martial Arts Academy to get ready for Jabouin. It’s par for the course when you come from a spot that’s not exactly known as an MMA hotbed, despite Garza, Jason Brilz, and Chris Tuchscherer all being fighters with North Dakota roots who have made it to the UFC in recent years.

“That says a lot as far as us being pretty tough guys living up here where nothing happens,” laughs Garza, a California native whose family settled in his current hometown when he was a child. In fact, he notes his parents as a big reason he’s stayed where he is; that, and a pact with his coach, Dylan Spicer.

“I was about to move out of here to Denver,” said Garza. “I had enough with the weather and then my coach, Dylan Spicer, got me to stay and we made a pact, saying let’s give it one more year of training really hard, and we’ll see what happens.”

In that year, Garza’s life changed.

After winning a host of bouts on the local scene, he was brought in to compete for a spot on season 12 of The Ultimate Fighter, only to lose a hard-fought bout to eventual finalist Michael Johnson. More wins followed before he received a WEC invite that came on just five days’ notice to replace Jason Reinhardt against Tiequan Zhang. He took it, despite the short turnaround time and being asked to fight at high altitude in Colorado.

“It was kinda hectic for a while,” he said of the lead-up to the Zhang bout. “What a lot of people don’t know is that I had a fight 18 days before that fight. I felt confident that my cardio and my conditioning were still there, but at the same time it was still a little hectic because we had five days’ notice, flew out there four days before to high altitude, and there was a lot of pressure on me and a lot of stuff working against me. That had a lot to do with the mental preparation as well.”

Zhang would submit Garza with a guillotine choke at 2:26 of the first round. It was his first official pro loss in 11 fights, but he has no regrets, because when you’re not in Las Vegas, Southern California, New Jersey, Albuquerque, Colorado or other hubs of MMA activity, you have to jump on any possible opportunities that come up.

“Five days’ notice is pretty bad, but at the same time I was thinking this is my chance to get my foot in the door,” he said. “My chance before that was The Ultimate Fighter, and I felt like I could have been one of those guys on the show. I came pretty close to beating Michael Johnson and then I just figured that this was the big chance that I needed, and sometimes those short notice opportunities are what you need to take, so I had to take the fight no matter what.”

If you’re keeping score, that’s an 0-2 count for Garza, but the 27 year old still had one more swing left, and he would get it in his UFC debut on the TUF12 finale card in Las Vegas last December. His opponent was jiu-jitsu wizard Fredson Paixao, and considering that six of Garza’s 10 wins came via tap out, a ground war was expected.

But less than a minute into the bout, as Paixao shot in for a takedown, Garza landed a perfectly timed flying knee, knocking the Brazilian out instantly. It was an emotional victory for Garza, one that also earned him a Knockout of the Night bonus in the UFC’s first ever featherweight fight, but the joy quickly turned to concern as Paixao remained motionless on the canvas.

“I celebrated the win, but after a while when we were all just standing there, I felt really bad for him,” said Garza. “I was hoping and praying that nothing major happened to him. After I watch it and after hearing people talk about it, the more and more I think like that could have been a career-ending injury.”

Thankfully it wasn’t, as Paixao was given a clean bill of health after being examined at a local hospital following the bout, but it was a reminder to Garza that in a contact sport, people can get hurt, so every effort must be made in the gym to prepare for every possible situation. And that’s what he’s doing. A former point guard for Jamestown College, Garza has gone all-in on his MMA career.

“I transferred everything into MMA,” he said, and if all you see him as is “the guy who landed that knee on Paixao,” that’s okay, because now that he’s here, he plans on showing off his entire fight game on the sport’s biggest stage.

“The UFC fans, all they’ve seen is that knee,” he said. “That was my first fight and because it was only 51 seconds, I guess that’s why they only see that knee. But in this upcoming fight I’ll be able to display more of my tools.”

It kind of makes this crazy trip all worth it for him, and while he’s dead serious when he talks about Fargo being honored (or dishonored) as “America’s toughest weather city” (by the Weather Channel), he realizes that maybe without taking this particular path, the tale of Pablo Garza may have been completely different.

“In one year, I took a bunch of fights, won them all, and I ended up getting on The Ultimate Fighter show,” he said. “I lost that fight and then I ended up getting the WEC fight, I lost that fight, and then I wound up getting my first UFC fight against Paixao, and all that happened in one year. I’ve only been doing this for about four and a half years now, so I guess if we wouldn’t have had made that pact, none of this would have happened. I would have been in Denver, snowboarding or mountain climbing right now.”