Own A Piece of Nate Diaz’s UFC Legacy... And There’s A Surprise

UFC Collectibles Is Giving You An Unparalleled Opportunity To Feel Closer To The American Athlete...With An Added “Surprise”
Sep. 23, 2022

With a UFC career spanning almost 15 years, Nate Diaz put a stamp on an unforgettable career, headlining and winning UFC 279: Diaz vs Ferguson.

Diaz first made waves in the Octagon back in 2007, competing in UFC’s renowned series, The Ultimate Fighter, taking part in season five. During which Diaz defeated Rob Emerson via submission, Corey Hill via triangle choke submission, Gray Maynard via submission also, before entering the Finale against Manny Gamburyan. Nate reigned supreme again after another submission from his opponent in the second round. His standout performances were enough to promote the American MMA fighter to UFC, where he would go on to make quite the name for himself in later years.

In 2007, Diaz had his first official UFC walkout, taking to the famed Octagon for UFC Fight Night 11 (UFC Fight Night: Thomas vs. Florian), where he fought on his first Main Card in a lightweight bout against Júnior Assunção. And in true Diaz style, he won during the first round via submission. The victory marked the start of a string of wins over the years, winning against Robinson, Pellegrino, and Neer, by submission twice and split decision respectively.

Over the years, Diaz competed in various other bouts, PPV events and Fight Nights. In 2015, Diaz called out Irish MMA star, Conor McGregor, in an infamous post-fight interview. Following this, a bout was scheduled in 2016 where Diaz replaced another fighter to go head-to-head with McGregor in one of the most anticipated and talked about fights in recent years. Diaz claimed victory over McGregor via submission during the second round, earning the ‘Performance of the Night’ bonus and both fighters were awarded the ‘Fight of the Night’ bonus too. After which Diaz was quoted saying “I’m not surprised MotherF***ers!”. 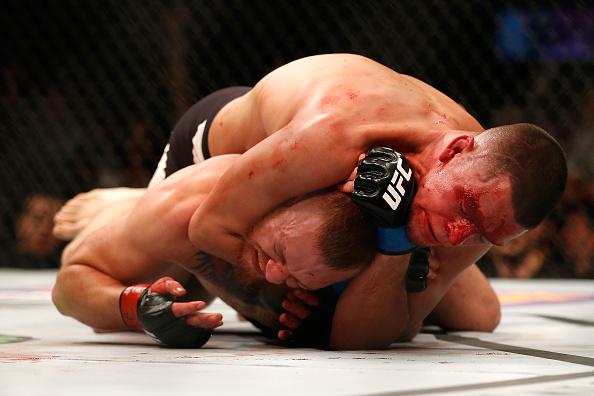 In September 2022, Diaz took to the Octagon for yet another wild chapter in a storied career. Originally scheduled to fight Khamzat Chimaev in a headline welterweight bout, Diaz ended up battling it out with Tony Ferguson after Chimaev failed to make weight. In this epic bout, Diaz came out on top, winning yet again by a brilliant submission – and earning his 16th ‘Performance of the Night’ bonus. After his fight, Diaz said “I want to get out of the UFC for a minute and show all these fighters how to take over and own up another sport how you’re supposed to do it...!”

Whether or not UFC 279 was the final time we get to see Diaz in the Octagon, you have the chance to own a genuine piece of his legacy in the sport. That’s right, UFC Collectibles is giving fans of the American athlete the opportunity to get their hands on an absolute exclusive piece of memorabilia. This one-off, unique item was used by Diaz at UFC 279, making it potentially one of the last things he used during his incredible career...and now it could be yours. 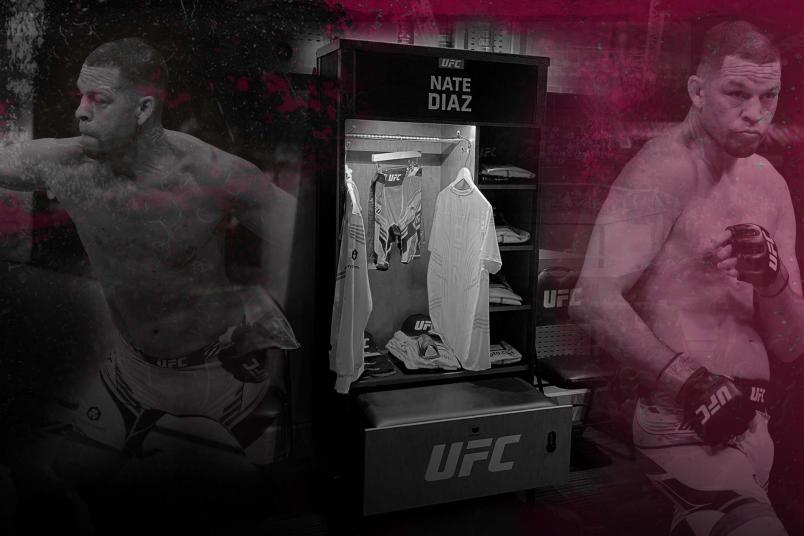 Interested? Like Nate Diaz...‘WE’RE NOT SURPRISED’! Place your bids now on this one-of-a-kind item from Diaz’s epic UFC 279 bout, perhaps his last ever!

The secret is out...UFC Collectibles is auctioning Nate Diaz’s fight locker, which he stored his fightwear in prior to and after his final outing for UFC. This locker is a one-of-a-kind and allows you to become the owner of a genuine item from UFC 279. You will be the sole owner of this item – what a talking point!?

Furthermore, not only will you own the locker that he used at UFC 279, but inside the locker will be loaded with some brilliant merchandise. Featuring a pair of official replica shorts, a replica hoodie and a replica jersey made by Venum. This item is so much more than just a locker.

If you win the auction, you’ll become the proud owner of not only Diaz’s UFC 279 fight locker, used by the star himself, but you’ll actually own a piece of UFC history.

Interested? Like Nate Diaz...‘WE’RE NOT SURPRISED’! Place your bids now on this one-of-a-kind item from Diaz’s epic UFC 279 bout, perhaps his last ever!