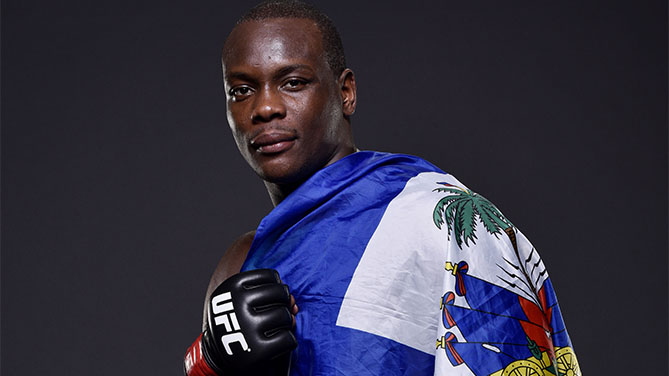 Instant replay was made for Ovince Saint Preux.

Even with well-trained eyes on him, the UFC light heavyweight has delivered four finishes inside the Octagon no one saw coming and that most needed several viewings to even understand what happened, including UFC President Dana White.

“After the [Patrick] Cummins fight at the press conference, Dana was like, “OSP is killing me, this is the second fight in a row where I have literally had to watch the replay to figure out what happened,’” Saint Preux said. “That’s the fighter I am. One minute, everything can be cool, calm and collected. Next minute, you’ve got a class five hurricane hitting you. I tell people when you’re watching me fight, you better make sure you’re holding your beer or your food and you’re watching the big screen or the cage, because anything can happen in the blink of an eye with me. You don’t want to be that fan who missed it and needs to watch the replay.”

Whether one sees it live or not, a second or third or fifteenth viewing will be in order, because Saint Preux is climbing the division’s ranks while racking up wins not just in spectacular fashion, but in ways most wouldn’t think were possible.

In his two most recent Octagon outings, the former linebacker and defensive end for the University of Tennessee Volunteers scored two first-round knockouts against Mauricio “Shogun” Rua and Patrick Cummins while moving away from them. Before that, “OSP” earned back-to-back sub stoppages with the first over Nikita Krylov via a choke that had previously only been used in the Octagob by the move’s namesake - Jason Von Flue - and the second saw Ryan Jimmo tap to a broken arm, which occurred a round earlier while blocking Saint Preux’s head kick.

Basically, what OSP hits, he hurts. Even more worrisome, he’s not attacking wildly - Saint Preux knows what he’s doing and he’s precise about it.

“First of all, I’ve got a lot of power,” Saint Preux said. “If I connect with somebody’s jaw, I will drop that somebody. I tell a lot of people that I’m an unorthodox fighter. It’s funny, I think after my last fight people have started to recognize that I’m not getting lucky. My power is a fast track to the top spot. To be honest, I’m one or two fights away from it as long as I keep doing what I doing, coming to the gym and keep on drilling. My timing is my biggest ally right now. The biggest thing I’ve been working on in the gym is timing. If you can get your timing on point, you can be running backwards and still hit people fluid.”

And that is exactly how the 32-year-old improved his pro record to 18-6 against former two-time NCAA Division I All-American wrestler Cummins at UFC on FOX: Machida vs. Rockhold. “I wrestled for three years in high school and Patrick wrestled all of his life, so I knew that I was going to get taken down,” said Saint Preux, who worked on getting right back up after a big takedown like he was Walter Payton shrugging off a tackle. “I think that’s what demoralizes the wrestler more than actually trying to stop them from taking you down. I think that kind of threw him off, and towards the end of the round he kind of left himself open for a clean uppercut.”

It was almost like Cummins was falling on his own sword. Near the end of the first five minutes, Cummins shot for another takedown from way outside and Saint Preux spotted it from a mile away. As he backpedaled away from Cummins’ attempt, the fighting pride of Knoxville, Tennessee threw the fateful combination, which sent Cummins to the canvas, and moments later Saint Preux would be 6-1 inside the Octagon.

“I wasn’t really anticipating the knockout at all - I was just going off of reflexes,” he said. “What is funny is that was the first combination I was working on for this fight - jab, uppercut. That was crazy. There was one time during the fight where I tried to rip his head off and, literally, he saw that coming all the way and the shot that I rocked him with was the shot I didn’t expect to get him with that way. When I threw that uppercut, I was like, ‘Man, I know that landed, but I think I could have landed that cleaner.’ But then I saw him buckle and I was like, ‘I guess it did land pretty clean.’ I realized the round was short, so I jumped on him and finished him off with some hammerfists.”

Up next, OSP is set to handle his business as the headliner on August 8 in Nashville against fellow knockout artist Glover Teixeira. Once the owner of an insane 20-fight win streak, including five inside the Octagon, Teixeira has had some tough sledding as of late, taking decision losses to former UFC light heavyweight champ Jon Jones and highly-regarded wrestler Phil Davis. The Brazilian bomber is still quite dangerous, with 14 KO and five submission wins to his name, but, as with Saint Preux’s punching, OSP could be catching Teixeira at the right time as the rising star is ramping up and Teixeira could be slowing down.

“I think it’s definitely a good fight,” Saint Preux said. “He’s fought a who’s who in the division. He comes from a good gym. He’s obviously strong because he hits pretty freaking hard. A lot of his fights have been finished by TKOs. Obviously, I have my hands full, but I think he has his hands full too. Just for the simple fact that I’m coming off of two big wins and I have a lot of momentum behind me. He’s coming off two losses and I think he has a lot of pressure on him. You have to think if I’m fighting someone who is in the top 5, then you have to think my next fight I’ll be fighting for the number 1 contendership for the 205 belt.”

In preparation for his third UFC main event, Saint Preux is busy training with the team that got him to the Octagon and that has helped him win inside it. Since Day One, OSP has fought out of the Knoxville Martial Arts Academy under the tutelage of owner and head coach Eric Turner. For the past few years, Saint Preux has worked his boxing at Eppolito’s Boxing Gym and his Muay Thai kickboxing with Manu MMA at the Madhouse Training Facility in Atlanta.

Besides getting a step closer to the title, Saint Preux will not lack in motivation, having the Bridgestone Arena and the entirety of “The Volunteer State” cheering him on toward what he hopes will be the biggest win of his career.

“When you talk about the state of Tennessee, you usually talk about the University of Tennessee football program,” Saint Preux said. “Nothing against the other football programs throughout the state of Tennessee, but everybody talks about the UT Vols. I’m trying to build this fight as a season opener, and I could kick start things for the football team. I fight on Saturday and they fight four weeks after that. I’m trying to give them a little momentum to keep going. I’m just making sure to stay away from the outside distractions because everything is close to home. Pretty much everybody and their mother wants to see you and tell you good luck before your fight. I just told everybody, the week of the fight - do not call me. I’m not going to answer this phone. I’ve got a fight to get ready for.”