For The Second Time In His Career, Ovince Saint Preux Will Fight At Heavyweight During UFC Fight Night: Gane vs Volkov
By E. SPENCER KYTE, ON TWITTER @SPENCERKYTE • Jun. 24, 2021

As one of the most active fighters on the UFC roster, Ovince Saint Preux is no stranger to dealing with a late shift in opponents, but this weekend’s change was a little different.

Initially slated to face Maxim Grishin in a light heavyweight contest, the Russian veteran was forced to withdraw from the contest and resulted in Saint Preux being presented an opportunity to return to heavyweight in a clash with Canadian Tanner Boser.

“I was definitely on the way to making it down to 205,” said Saint Preux, reflecting on the situation. “When people asked, ‘Would you entertain the possibility of going back up to heavyweight?’ I would say,  ‘If the matchup is right, I’ll do it.’

“This time around, it is heavyweight, but Tanner is not a bigger heavyweight,” he said of his opponent, who was eager to get back into the Octagon after suffering a second straight frustrating decision loss just a couple weeks back to Ilir Latifi. “The opportunity presented itself, I sat down and talked about it with a couple different people, and they were like, ‘Hey man, this is a really good matchup for you.’

A fixture in the Top 15 at light heavyweight since arriving in the UFC from Strikeforce in the spring of 2013, Saint Preux made his first foray to the heavyweight division last May, taking on veteran Ben Rothwell after a couple of different assignments in the 205-pound weight class fell by the wayside.

“My first encounter at heavyweight, I fought one of the seasoned vets at heavyweight,” said Saint Preux, drastically underselling his initial heavyweight undertaking, which he lost by split decision.

In addition to having a wealth of experience, the aptly nicknamed “Big Ben” is a gargantuan human being, standing six-foot-four with massive paws, the thickness of a mature oak tree and using every bit of the 265-pound weight limit that comes with fighting in the heavyweight division. Not only that, but the Wisconsin native knows have to use his heft to his advantage, something Saint Preux learned firsthand last year.

“He didn’t look that big during weigh-ins, but the next day, I was like, ‘Is it me or does he look way bigger?’” Saint Preux added, laughing as he recalled his reaction to standing opposite Rothwell on fight night.

MORE UFC FIGHT NIGHT: Fight By Fight Preview | Rise Of Alexander Volkov | Justin Jaynes Is Always In Attack Mode | Fighters You Should Know | Truest Test Lies Ahead For Julia Avila | Charles Rosa's Game Of Inches | Ike Villanueva's Attitude of Gratitude | Alexander Volkov Can See His Path To The Title | Kennedy Nzechukwu Is All About Resiliency And Discipline | Rise Of Ciryl Gane

Boser isn’t nearly as big, having trimmed down from his first two UFC appearances and hitting the scales between 235 and 242 pounds in each of his last four contests.

After clocking it at 240 pounds for his bout with Rothwell, Saint Preux expects to land somewhere between 225 and 230 pounds when he hits the scale in Las Vegas.

“(I’ll be) anywhere between 225 and 230 because I was actually walking around last Tuesday at 223,” said the 38-year-old veteran, who hit his mark at 230 pounds on Friday morning. “When I fought Ben, I was a little heavier — I weighed in at 238 or 239 — and if I had weighed in a little lighter, I think that fight could have went differently.” 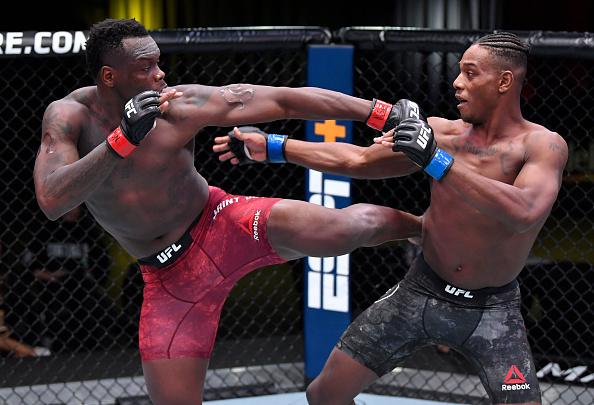 Now in his ninth year on the UFC roster and closing in on 25 appearances in the Octagon, Saint Preux has started to accumulate a handful of records and etch his name into the history books, including being in a tie with Jon Jones and Mauricio “Shogun” Rua for the most light heavyweight appearances of all time.

More than a decade after we first spoke, I asked the reserved veteran what it means to have logged 40 professional fights, 25 victories, and be one fight away from joining the relatively short list of people to have crossed the threshold into the Octagon 25 times in their careers?

“It means… it means that you’re f****** old and you’re getting older,” he answered with a cackle. “It always used to sound better when you’re one of the young fighters, but now I’m one of the old fighters now.”

Though he’s not necessarily fond of being one of the “old heads” in the 205-pound weight class, with age comes experience, and a greater understanding of what you need to do in order to be prepared come fight night.

For Saint Preux, it’s a lesson that he’s carried over from his days playing football at the University of Tennessee, where the veterans deployed an “I’m going to do the work I need to do and then get out” approach that resonated with the younger Volunteer.

“The biggest thing is just keeping myself healthy,” began Saint Preux. “If I can do that, that’s when it becomes fun because when I’m healthy, I know what I’m capable of doing.

“I’m doing way more cardio now than I used to do in the past because I know how my body operates, what my body needs. I’m fortunate that I’ve been here for a while and I have experience; I know what to do, so I’m good.” 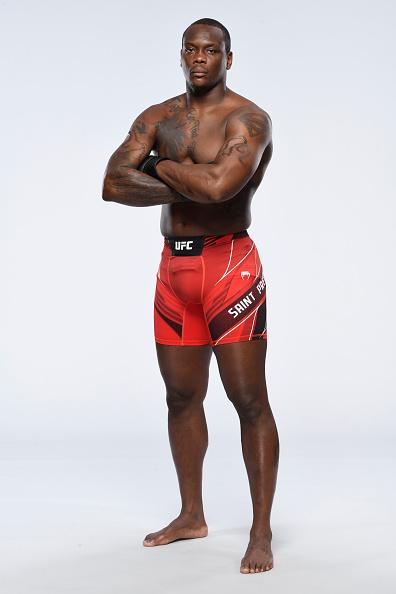 Ovince Saint Preux poses for a portrait during a UFC photo session on June 23, 2021 in Las Vegas, Nevada. (Photo by Mike Roach/Zuffa LLC)

And while the idea of dialing it back a little and working a slightly reduced schedule compared to the torrid pace he’s kept throughout his career has always sounded appealing to him, at the end of the day, a leopard can’t change its spots.

“I take fights,” Saint Preux said, equal parts proud of and resigned to his position in the light heavyweight ecosystem and his reputation as a competitor. “That’s what I do and what I’ve always done, and I don’t have a problem doing that. This is something I enjoy doing, I’ve been doing it for a while, and I feel the more active I am, the better I am because I can fall off pretty quickly.

“I try to make sure that when I’m going out there, you’re going to see me at my best every single time, including with this fight.”