Overeem's Year to Remember Isn't Over Yet

“I think any one of these guys is willing to fight and not evade the
fight, but truly fight and show their best, so I think that ultimately
the winners will be the fans.” - Alistair Overeem 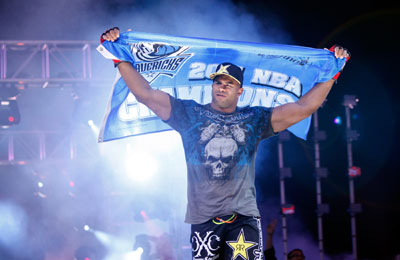 Alistair Overeem ended 2010 with four fights: three in one night on December 11th en route to a K-1 World Grand Prix title, and then a 19 second blast-out of Todd Duffee on New Year’s Eve.

This December, “The Reem” will get ready for the New Year in more sedate fashion. This time, he’ll make just one trip up those four steps, but it will be a biggie, as he will compete in the UFC for the first time on December 30th against former heavyweight champion Brock Lesnar.

It was the news that captivated the mixed martial arts world on Tuesday, a blistering wake-up call to those still sleepy from the Labor Day weekend – Overeem, the former Strikeforce heavyweight champion, had signed with the UFC and was kicking off his career in the Octagon with one of the biggest bouts of the year.

That’s quite an entrance, and for once, it was news that wasn’t met with any negativity by the usual naysayers. Overeem isn’t surprised either.

“I think this is big news and a big development,” he told UFC.com. “It’s one of those dream matchups – you have two big guys, one of them specializes in wrestling, one specializes in striking, and everybody wants to see it. There was a lot spoken about this dream matchup in the past, but it couldn’t materialize because I wasn’t in the UFC, but now that I am, anything is possible. I already received a lot of emails and messages from people who congratulated me; they’re happy I joined, and they’ve very happy with this matchup.”

That’s not surprising. If you were going to create a prototype of a heavyweight prizefighter, Overeem is the blueprint. 6-4, 265 pounds, with knockout power in his fists, feet, and knees, the imposing 31-year old from the Netherlands certainly looks the part, and when the bell sounds, he delivers the goods as well, as his title winning efforts in Strikeforce, K-1, and Dream prove beyond a shadow of a doubt.

Yet despite being unbeaten in MMA over the last four years (10-0, 1 NC), there has always been the question of whether we would ever see him compete against the best heavyweights in the UFC. Overeem wondered the same thing, but he also believed his eventual arrival was inevitable.

“I did always expect myself to get into the UFC at one point in my career,” he said. “I didn’t know when that was gonna be, but I did always see myself in the UFC at some time.”

And while he battled it out in PRIDE (mainly as a light heavyweight), Dream, Strikeforce, and K-1, he kept his eye on his peers Stateside.

“You want to keep track of your competition, so of course I watched the UFC heavyweight division very closely to see who was in there and what they were doing,” he said, before giving his current scouting report. “They’re strong, big guys and I truly believe they belong at the top of the world, so it does pose a challenge and I definitely need to step up my game. You have the wrestling guys in the UFC, and the big guys, but lately, especially with (Junior) dos Santos and (Cain) Velasquez, they’re mixing it up with striking really well.”

If Overeem wins his UFC debut in December, he will be seeing the winner of the November 12th title bout between champion Velasquez and challenger dos Santos, and whoever it is, that’s another dream matchup. And just think of Overeem in the Octagon with guys like Shane Carwin, Frank Mir, Pat Barry, and “Minotauro” Nogueira. The intriguing matchups are endless, and Overeem is excited about such possibilities.

“I think I have a lot of great matchups,” he said. “I think any one of these guys is willing to fight and not evade the fight, but truly fight and show their best, so I think that ultimately the winners will be the fans. They’re gonna see some great matchups with me in the future and I’m excited about that.”

First up is Lesnar, the former heavyweight champ who will be returning to action for the first time since October of 2010. But after surgery to take care of his diverticulitis, Lesnar expects to be back in fearsome form come December, and the best Brock is what Overeem is looking forward to facing.

“He’s a very strong, very dangerous, and very explosive heavyweight,” said Overeem of Lesnar. “I think he’s kind of unique in the way he operates and fights, and there are some weaknesses in his game, but I think everybody has weaknesses. Overall, I see him as a very dangerous heavyweight.”

It takes one to know one, but beyond the excitement that Overeem is injecting into the UFC heavyweight division is the fact that should he win the championship, he may just end up as the most decorated fighter the weight class has ever seen. That would be pretty impressive.

“Of course it’s crossed my mind when I think about it, but I’m not occupied with it,” he said when asked about his legacy. “I’m more occupied with the day-to-day routine. If I think about it, I did pull off some amazing things that no other fighter did, and that does sort of make me proud, but I’ve got to stay focused. Previous results don’t guarantee the future.”

“I actually had a lot of people ask me that (in January, about being in the UFC), and I said ‘well, I’m under contract, so I don’t see that happening,’” he recalled. “The Strikeforce GP was going to be the main priority. But things changed. Last year that was also the case. I fought Brett Rogers and after I was supposed to fight Fedor (Emelianenko), but he declined, and that actually forced me to go into the K-1 and I won that belt. So I’m okay with change.”

So are UFC fans.