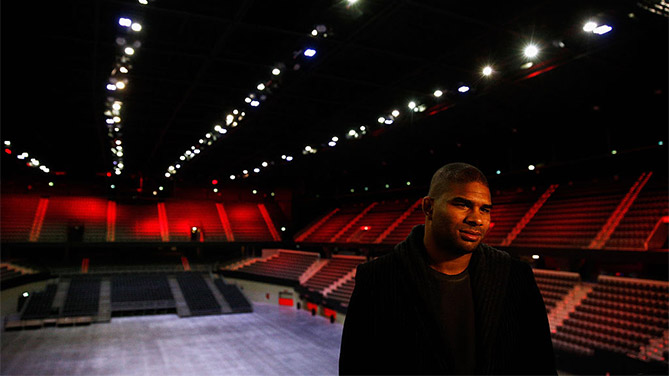 Alistair Overeem’s journey to the top of the UFC’s heavyweight division hasn’t gone quite as fast as expected.

But on Sunday night, the Dutch striker will get his chance to make good on squandered opportunities by securing a shot at the only major combat sports trophy that has eluded him so far, in front of familiar faces at Fight Night Rotterdam.

Headlining the Octagon’s first foray into his home country of the Netherlands, Overeem will get the chance to add one of the most prestigious names in the sport to his resume when he squares off against former champion Andrei Arlovski. Former champion and current teammate Andrei Arlovski, that is.

“They offered me Cain Velasquez and Andrei Arlovski but Cain was hurt, so it was Arlovski because they wanted me for Rotterdam,” Overeem said.

Much has been made of this dynamic ever since the headlining bout for UFC Fight Night: Overeem vs. Arlovski was announced in February. Yet “The Reem” doesn’t get why it’s supposed to be such a big deal that two fighters, both training under veteran coaches Greg Jackson and Mike Winkeljohn, will share the cage looking to take the next step towards a UFC title shot.

Arlovski has insisted that he’s the number one priority at Jackson’s, but to Overeem, bragging rights have never been what he was searching for in Albuquerque, New Mexico.

“The high altitude is great, the coaches and the training are really good,” he says of the spoils that come with being a part of the renowned team. Running into potential opponents is simply one of the few disadvantages that a big team like that brings.

Overeem has been a part of the team for two years now and the results speak for themselves. After shockingly getting knocked out twice in a row, Overeem has excelled with a 3-1 UFC record since joining Jackson’s, a streak that saw him defeat the likes of Stefan Struve, Roy Nelson and, in his most recent and most impressive Octagon outing to date, former champion Junior Dos Santos.

This new situation against Arlovski, as unique as it might seem, is in fact nothing new for Overeem. The former K-1 standout has competed against friends in the past and actually would’ve joined Team Jackson-Winkeljohn much sooner if it wasn’t for fights against Travis Browne and Frank Mir in 2013 and 2014, respectively. Both of them were training in Albuquerque at the time and prevented Overeem from joining their ranks.

“No, no. Never thought about that. I think Arlovski has more problems with the situation than I have. To me, it wasn’t a problem," Overeem said.

If anything, it was a logistical challenge having to avoid running into each other during camp. Mentally, at least, Overeem was always prepared to potentially lock horns with a teammate.

“Well, with the heavyweight division, it’s not like there are hundreds of fighters," Overeem said. "So when you’re both at the top, there’s a good chance that at some point you’ll have to fight each other.

For “The Reem," fighting a teammate whom he doesn’t have much of a connection with is nothing more than a clear-cut business decision. After all, he’s in this for himself, not to make friends, and there’s nothing wrong with stating as much. 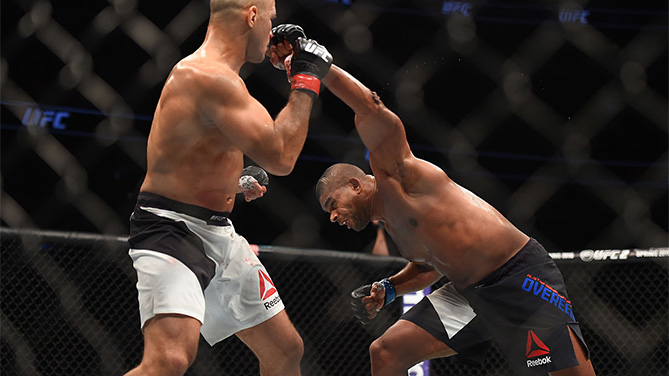 So is there anything that Overeem can take into the Octagon from sharing the mats with his opponent? Any observations that’ll come in handy once they square off in the cage? Not really.

“We trained together a couple of times, but it was too little (to take anything from it)," Overeem said.

The last time two of Greg Jackson’s protégés battled it out under the bright lights, Carlos Condit and Georges St-Pierre put on one of the best fights of 2012 after making sure they trained on different sides of the room for years before clashing in the cage. And if a look at both of this Sunday’s heavyweight headliners’ records is any indication, fans inside the Ahoy Rotterdam might be in for a similar treat come Sunday night.

“It’s great, people are enthusiastic,” Overeem said. “The show sold out in a matter of hours. Hours. Next time they come here, they’ve got to book a bigger arena.”

Not just for the Netherlands, though, as bigger things might loom on the horizon for Overeem if Sunday’s show goes well. After blasting out Dos Santos last December, he has never been in a better position within the UFC’s pecking order since he debuted with a blistering first-round knockout over former champion Brock Lesnar in 2011.

Beating Arlovski therefore wouldn’t be a classic breakthrough for him, but instead a confirmation of his status as a legitimate title contender. Which means that there’s a big reward and, subsequently, an even bigger risk waiting inside the cage for him.

“Definitely, I agree. There’s a lot on the line for me in this fight but I will win against Andrei Arlovski.”

Next? A shot at the UFC title, Overeem is certain. And as far as Arlovski goes? Could a cage fight be just what it takes to make the two of them regular training partners, or friends even?

“Who knows,” he laughed. “After the fight, I might have a cup of coffee with him.”