Overeem Not Ready to Leave Town Yet 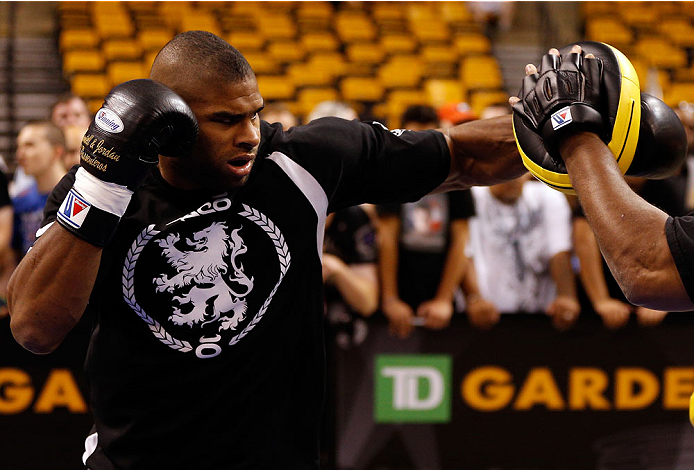 In 2013 though, Overeem felt the sting of knockout defeats twice against Antonio “Bigfoot” Silva and Travis Browne. In both fights, the England native was on the verge of victory before that game of inches came into play, and instead of talking about him getting a shot at Cain Velasquez’ UFC heavyweight title, as he heads into his UFC 169 bout with Frank Mir on Saturday, the discussion is about the loser possibly hitting the unemployment line on Monday.

That could be a sore topic to discuss, but Overeem doesn’t mince words when it comes to what’s at stake in Newark, New Jersey this weekend.

“This fight is a loser leaves town match,” he said. “But I'm not ready to leave town yet, so enough said.”

If Overeem is shuddering in his boots at such a fate, he’s not showing it. Instead, he sounds as confident as ever, which could be the result of a number of different possibilities, the first of which being that for this camp, he has returned to his roots, preparing for Mir in Thailand before returning to his longtime home in the Netherlands before making the trip to Jersey.

“I wanted a change in scenery and sparring partners,” said Overeem, who has been most recently associated with the Blackzilians team in Florida. “Remember, I'm used to training in Thailand, as I have done many times before and always with great results. The temperatures are warm, compared to cold Europe and the USA now. This works well in my motivation and helps prevent injuries. Also, ask anyone, Thailand is a great, great place, with nice food and friendly inhabitants.”

Call it the “Way of The Reem.” Most fighters go away to training camp to get mean, to be uncomfortable as possible. Overeem takes a different path, with a peaceful atmosphere outside the gym being most conducive for him getting ready for war. And truth be told, despite his long 11-0, 1 NC winning streak that stretched from 2007 up until the Silva fight in February of 2013, he’s been in the position of having to bounce back from consecutive losses before, most notably in 2006-07, when he dropped three straight in PRIDE to Rogerio Nogueira, Ricardo Arona, and Mauricio “Shogun” Rua.

“I re-assessed and made changes to my scenery, trainers and sparring partners, but also to my training methods,” said Overeem, who admits that a combination of adjusting to the UFC and losing being a part of the fight game have been the reasons for his defeats. There are no elaborate excuses, no finger pointing. To him, if you’re in the heavyweight division and wearing four ounce gloves, anything can happen. So after a quick look at where he is at 33 years old, he moved on.

“You always need to re-assess where you are, that’s what keeps you on top,” he said. “Losses just make you re-assess more.”

In Mir, Overeem will be facing an opponent who has likely done plenty of re-assessing himself in recent months, as the former two-time UFC heavyweight champion has dropped three straight to Junior Dos Santos, Daniel Cormier, and Josh Barnett. “The Reem” respects what Mir brings to the Octagon, but he’s still confident that if he’s on top of his game, the Las Vegan doesn’t have a chance.

“He (Mir) is an intelligent, well-rounded fighter,” said Overeem. “If I stick to my plan, there shouldn't be a problem.”

That’s confidence. In a game of inches, you have to be secure enough to ignore the reality that with one wrong move, you could be staring up at the lights in defeat. Yet without the skills and focus to not make that wrong move, that confidence is nothing but false bravado. And again, no one knows that better than Alistair Overeem.