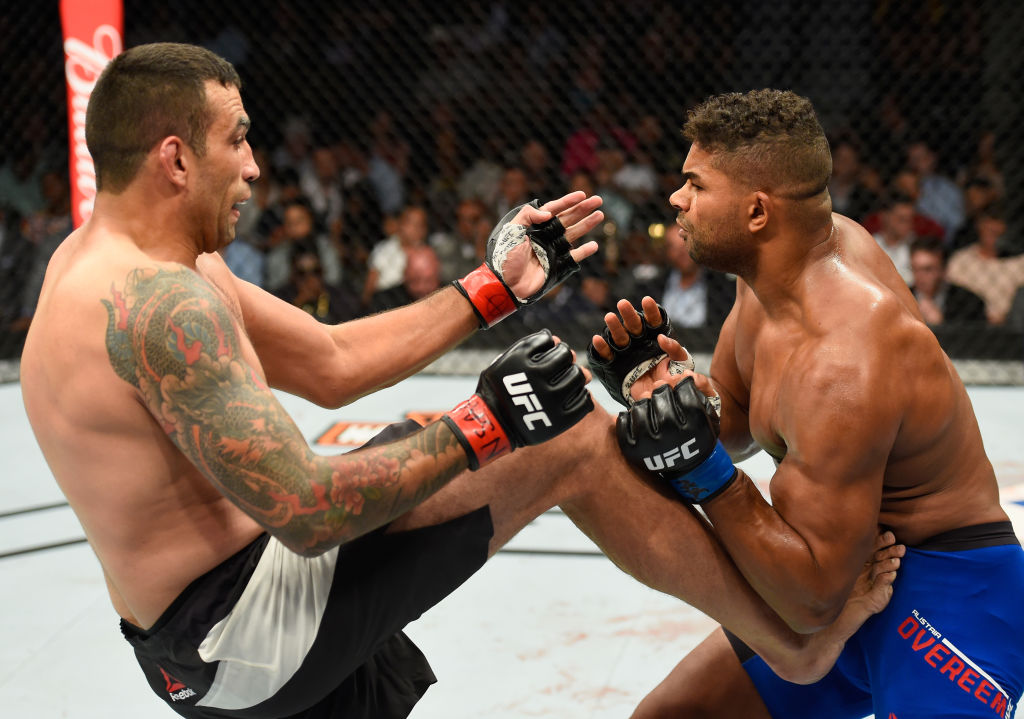 Werdum won their first match in PRIDE in 2006, with Overeem evening the score in a 2011 Strikeforce bout.

Werdum flew out of his corner with a wild kick that Overeem easily eluded, and after that start, the rest of the round was a tense war of nerves without much sustained action. Overeem did pressure the Brazilian, though, and he landed a few right hands that got his opponent’s attention.

A hard body kick by Overeem early in round two allowed Werdum to take the bout to the mat, but Overeem didn’t stay there long, and he forced Werdum to stand. Overeem scored with a hard knee and again the fight went to the ground, but the Netherlands veteran had no intention of remaining there, so he stood once more and tagged his foe with a hard left hook.

Werdum finally started getting more active in the opening stages of round three, and with a little over three minutes left, a right knee to the head put Overeem on the deck. After a brief stay on the mat, the two rose and Overeem was still wobbly, prompting a takedown from the former UFC champ. And while Werdum kept his foe there until the final horn, he wasn’t able to finish him, and that wound up costing the Brazilian, as the judges rendered Overeem the victor.

Miss any of the Main Card? Watch It Again On UFC Fight Pass | Start Your 7 Day Free Trial of Fight Pass 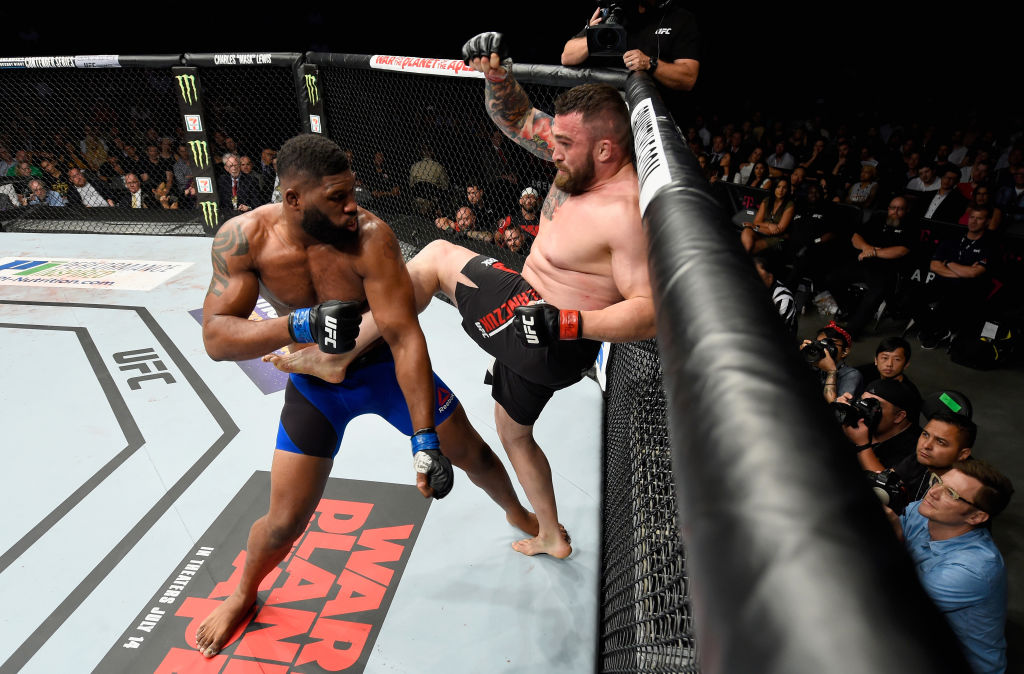 Heavyweight prospect Curtis Blaydes picked up an important victory as he shut out Daniel Omielanczuk over three rounds.

Blaydes wasn’t able to get the takedown he was looking for in the opening round, but he pushed the pace and was the busier fighter throughout.

The strategy didn’t change for the Illinois native in the second, but Omielanczuk was still able to stay upright and keep Blaydes from putting the fight where he wanted it to go, and as the fight wore on, Omielanczuk was getting in his share of shots, including a flush knee to the head, but the edge was likely going to Blaydes because he was pressing the action.

The heavyweights tired in the final round, with neither fighter pulling ahead significantly, but the early work put in by Blaydes was enough for him to take the win by three scores of 30-27. 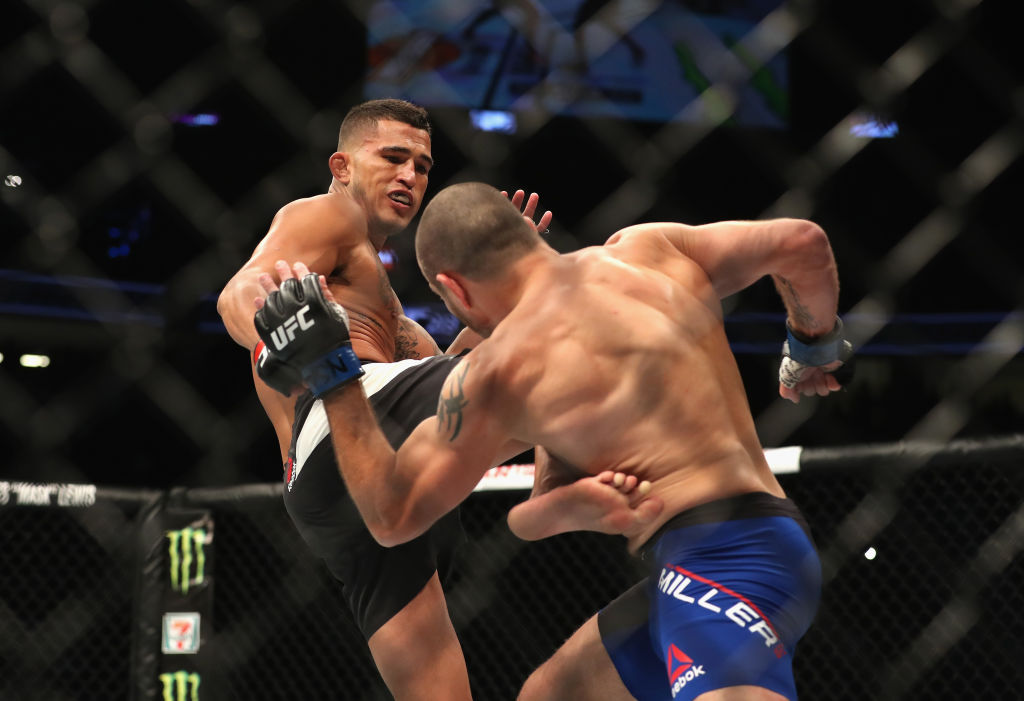 Anthony Pettis’ return to the lightweight division showed him to be back in championship form as he shut out Jim Miller over three rounds.

Miller came out firing kicks at Pettis’ legs, but “Showtime” smoothly settled into the fight and began delivering his own kicks, quickly putting Miller on the defensive. Pettis was particularly effective when he caught Miller against the fence, and when the first five minutes were over, it was the best the Milwaukee native had looked in a long time.

Pettis brought his kicks upstairs in round two, and the now bloodied Miller caught one and put his foe on the mat. Pettis looked for a submission from the bottom, but Miller fought through it and almost got Pettis in trouble before the former champ scrambled into the top position. With 30 seconds left, Pettis took Miller’s back, but the New Jersey product got loose and made it out of the round.

Pettis kept it standing in the third round and he controlled the action once more, and while he didn’t get the finish, the win was a pivotal one for a fighter who needed one in a big way. 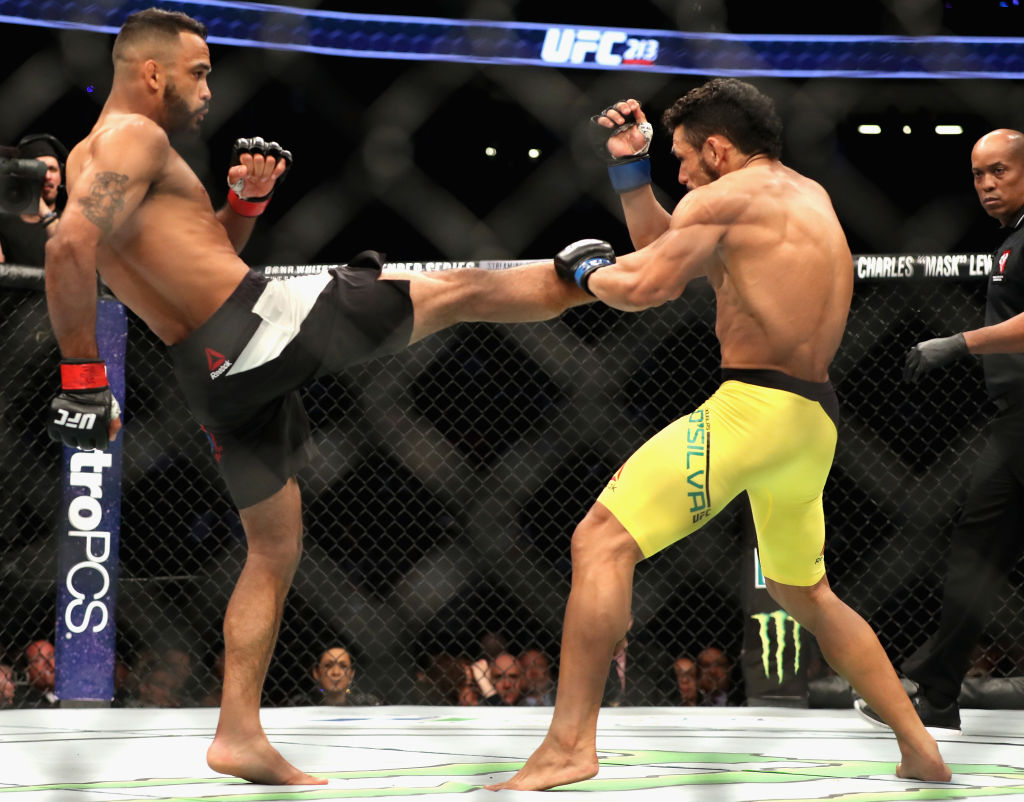 Bantamweight contender Rob Font impressed in his elevation to the Pay-Per-View main card, as he used his striking to set up a second round submission of Douglas Silva de Andrade.

Font has talked of using his ground game more, and he proved it in the first minute of the opening round as he took Silva to the mat. Silva rose quickly and got loose after nearly getting caught in a guillotine choke. A combination by Font rattled Silva, but an inadvertent eye poke followed, giving the Brazilian time to recover. When the bout resumed, Silva scored with some hard strikes, but Font regained control by the end of the round.

The technically sound Font continued to stay a step ahead of Silva in round two, and his accurate shots were taking their toll on the Para native, who got rocked bad with a right hand with 90 seconds left. After that, the fight went to the mat, and as Silva tried to slam his way out of trouble, Font locked in a guillotine choke that forced the tap out at 4:36.