Outside the Octagon: Swanson's Sweet Science 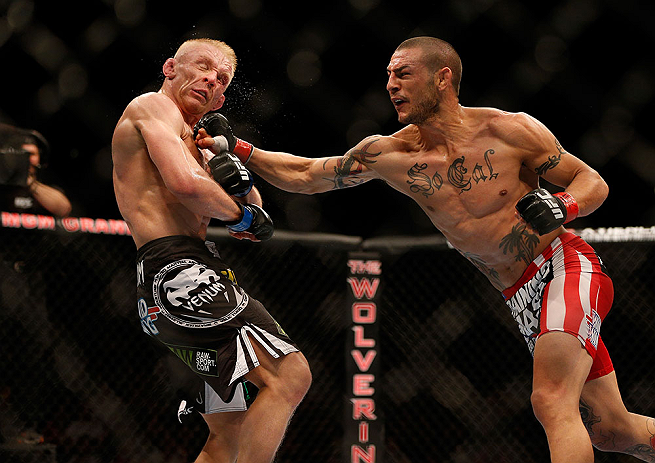 In his seminal reports in the 1800s, Pierce Egan referred to boxing as the “sweet science of bruising,” a phrase – at least the sweet science part – that has stuck to the sport ever since. And as anyone who has practiced it will tell you, it is a science, a chess match with gloves that despite what that drunk guy on the barstool next to you might think, not everyone can do.

Just watch a Pernell Whitaker or Floyd Mayweather fight and tell me otherwise. And as a combat sport, it is one of many disciplines a mixed martial artist needs in his bag of tricks to compete in the UFC.

But as a science, it’s not just learning 1-2s and check hooks that will allow you to reach a master’s level of proficiency. Some go that step further, and just like training with high-level jiu-jitsu black belts will teach you more about the gentle art, going into a “real” boxing gym will take you places you would never see otherwise.

Cub Swanson is one of those fighters who have gone that extra mile. Sure, he has top level MMA training at Greg Jackson’s gym in Albuquerque, where he gets world-class striking work in with Mike Winkeljohn and Brandon Gibson, but half of his camp is spent back in California with Joel Diaz, trainer of champions such as Timothy Bradley and Omar Figueroa.

It’s there that the tough love is at its most intense, with no one in that gym caring that Swanson is about to headline Saturday’s UFC Fight Night event in San Antonio against Jeremy Stephens. To his teammates there, he’s just another guy with gloves on, expected to work as hard as a four-round undercard kid.

That’s where fighters are made, and in combat sports, the stories that come out of those sessions are the best ones – maybe not to the ones involved at the time, but definitely to those of us listening.

Former heavyweight contender Derek Bryant once told me of sparring with the legendary Larry Holmes. Not the prime version of “The Easton Assassin,” but the 38-year-old one getting ready for a 1988 bout with Mike Tyson. Yet despite his age, Holmes’ jab was still as potent as ever.

“I never seen the jab coming out,” said Bryant.  “I only saw it going back.  I couldn’t believe it.”

And that’s from someone who was boxing since he was a kid. Mixed martial artists - many of whom come from backgrounds far removed from boxing like wrestling and jiu-jitsu - have even more of a learning curve to deal with (i.e. abuse to take in the gym).

Former UFC light heavyweight David Heath used to travel to the local boxing gym in Oklahoma to train with Allan Green. Green never won a world title in the pros, but he was a top super middleweight contender for years and a decorated amateur. You can probably guess what happened next.

“I told myself that when the bell rang I was gonna stay outside of his jab,” recalled Heath. “Next thing I know, I’m looking at ceiling tiles with my head getting snapped back.  I had to look behind me to see who else was in the ring with me.  To my detriment, I didn’t go down from the shot so I had to keep going another three minutes.”

Even Swanson wasn’t immune from those early days of fistic hazing, as he told me of his first time sparring with Bradley for a story in the current issue of UFC magazine.

“He (Bradley) hit me with a left hook and it popped my eardrum,” he said. “I remember going to the corner and his dad was there and he was trying to coach me between rounds, and I could see his lips moving, but all I could hear was “EEEEEEEEEEE.” So I just nodded my head like ‘okay.’” 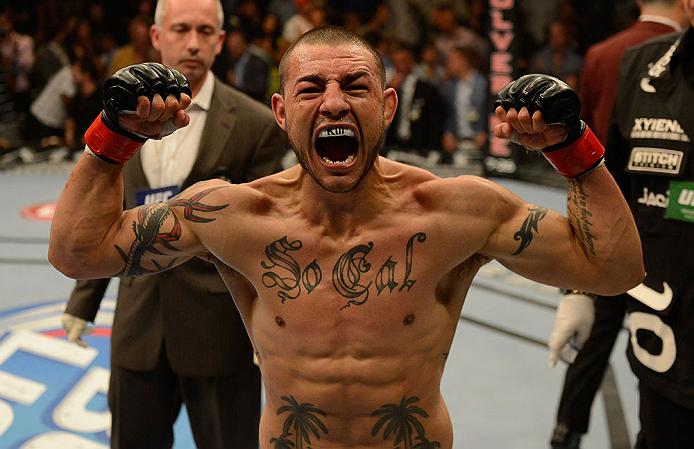 He laughs about it now, just like they all do. It’s a badge of honor of sorts, and for those who continue to show up day after day after day, they develop a part of their game that few can match. Watch Swanson from his fight with George Roop in 2012 on to the present day, and see the combinations he throws, his footwork, and the accuracy of his shots. To my eyes, he has the best boxing in MMA today, and that’s saying a lot because there are plenty of gifted strikers in this sport. But when it comes to pure boxing, this jiu-jitsu black belt has it. It’s not something that he was born with, but something borne from years of tiring work and a literal dose of blood, sweat, and tears. Not many people want to go through that, even if it does eventually give them a weapon few can match if executed properly.

That was the philosophy of former UFC champ Pat Miletich when he was coming up in a sport that was still very style vs. style-oriented.

“I had sparred with a lot of really good boxers at Pena’s in Davenport,” “The Croatian Sensation” told me last year before the UFC’s 20th anniversary. “There were guys like Antwun Echols and Michael Nunn, the McGowan brothers and David Levi. And I said if I can spar with these guys for a long time and hang with them – and not just survive, but really hang with them, rock people back and drop them and things like that – there’s really nobody in MMA that’s gonna hurt me. So that was really important and I did my best to absorb and learn. You had to put your ego aside and get your ass kicked and learn the craft because I wasn’t a striker. Like I tell people, I donated blood for a lot of years down there before I started figuring things out.”

Once he did, he became a champion. That’s Cub Swanson’s goal now.

ALSO CHECK OUT PREVIEWS FOR: