The popular actor remembers the time he dodged sparring with Joanne Calderwood and shares his passion for MMA ahead of UFC 257: Poirier vs McGregor 2
By Juan Cardenas, on Twitter @desautomatas • Jan. 21, 2021

Joanne Calderwood will have a special fan rooting for her this upcoming Saturday when she steps into the Octagon to face Jessica Eye: her Scottish compatriot and popular actor Sam Heughan, who was once close to becoming a sparring partner for Calderwood.

“I was training in a Muay Thai gym in Glasgow,” Heughan recalls. “This sweet girl with a very soft voice and strong Scottish accent was standing and watching and she introduced herself. She offered to join in if I needed a partner. Lucky for me, we had enough numbers.

"The other fighters told me I dodged a bullet, as she’d probably have knocked my head off, despite me being twice her size. Or given me one of her signature elbows, all with a sweet smile. She inspired me to go train in Thailand for a few weeks at a local Thai boxing gym; it was one of the most intense and rewarding experiences I’ve had.”

Best known for his role in the series Outlander, the Scottish actor found some time to talk with UFC.com while he films an episode of the series “Men in Kilts,” but it’s clear he enjoys the subject, as he remembers how quickly fell in love with MMA the first time he saw it. 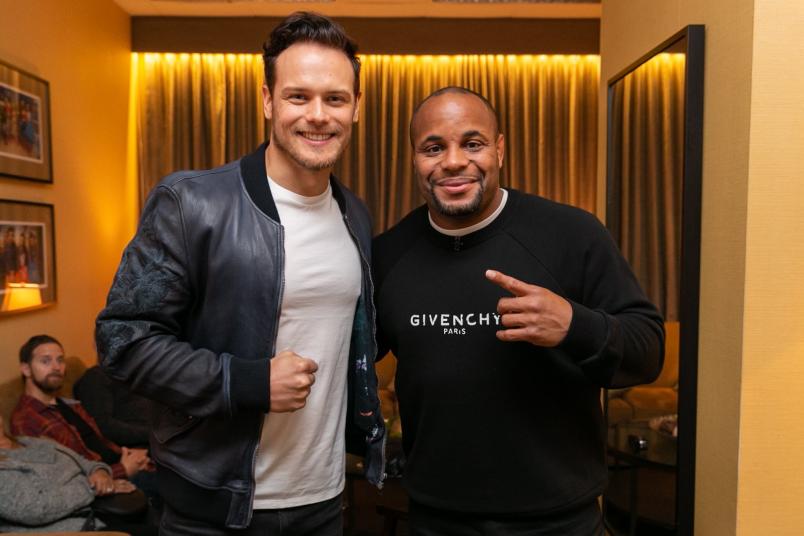 Actor Sam Heughan and Daniel Cormier discuss UFC 230: Cormier vs Lewis on November 1, 2018, ahead of the Madison Square Garden event.

“I remember first watching MMA and being shocked. At first, I thought there were literally no rules; it was intense. I followed early episodes of The Ultimate Fighter and loved Georges St-Pierre. I started to understand a little more and began to realize the skill and tactics involved. It’s a tough sport with so many characters to entertain and excite.”

But Heughan is not entirely a bystander, as he has experience in martial arts in addition to Muay Thai.

“I’ve got a brown belt in Judo and done a little Thai Boxing. I’d have loved it. Until I got hit, then I definitely changed my mind. It’s great being an actor; you can just pretend. The bruises and blood are fake and that suits me. Conor’s walk out to ‘Foggy Dew’ with Sinead O Connor singing was electric. I’d definitely have something similar and Scottish.”

Quickly, one realizes Heughan is a hardcore fan, passionate about fighters and the whole UFC atmosphere and universe.

My UFC fighter name would be "Freakshowtime Sneaky underhand guy"#TUF

“I sent some of my Sassenach whisky to Claudia Gadelha recently; I think she’s great, powerful and a contender. I’ve met the former champ-champ Daniel Cormier and love his spirit. His dirty boxing and wrestling were class. He’s a great guy and good commentator. Actually, I love the commentary team: Jon Anik, Dan Hardy and, of course, Joe Rogan. We should put them all in the ring together; that’d be a fight.”

Not surprisingly, Heughan has attended a couple cards in Europe and the U.S., including the very first UFC Glasgow event.

“I’m in our shared home country of Scotland right now. I remember going to the first ever UFC event held in Glasgow; JoJo was fighting on that card, too. The atmosphere was incredible with some of the best fans in the world. The Scots like to sing as much as the Irish and our unofficial anthem, “Flower of Scotland,” was deafening.”

It is from Scotland that he will be watching UFC 257 this Saturday.

“This looks to be such a great card, with so much press covering the headliners and such a good fight for JoJo. The recent fights at Fight Island have been incredible. Both JoJo and Eye are evenly matched, so it should make for an intriguing fight, but I think JoJo is a better grappler and an incredible striker.”

His prediction is clear and well, yeah, a little biased.

“JoJo for the win! She’s made some real improvements to her ground game, being naturally a striker and Thai boxing champion. JoJo is on the rise and had lined up a potential championship fight with (Valentina) Shevchenko. This will be another victory to continue her momentum.”

Before letting him go, we asked him to elaborate on a particular Tweet where he once proclaimed that his fighter nickname would be the “Freakshowtime Sneaky underhand guy.”

“I don’t remember that,” he laughs. “But sure, I’ll take it. I love Anthony Pettis, and everyone remembers the head kick he did, bouncing off the cage. I guess my underhand would mean that I don’t play by the rules. And I have to win. It’s in the script.”