It was a historic night in Ottawa in more ways than one.

The UFC made its first trip to the capital city and the fighters didn’t disappoint. Six fights ended with finishes in the third round, which is the most in UFC history for one event.

If Wonderboy’s KO win against Johny Hendricks was his baptism into the elite level, his performance against MacDonald was his testament to invincibility.

MacDonald looked frustrated and confused after five rounds with Thompson. He seemed determined to solve the puzzle but in the end was left with no answers.

“What I was surprised about was that he wasn’t rushing it,” MacDonald said. “The distance was very challenging. I felt like I could have bridged the gap a little better. I was unsuccessful with the takedowns. I thought I’d be more successful with that.”

Now the only question remaining for Wonderboy is if he will be the one waiting for the winner of Robbie Lawler and Tyron Woodley at UFC 201. He seems to think he’s earned the title shot.

Although some may have been unimpressed with Thompson’s decisive win against MacDonald, it’s hard to argue with the results.

Wonderboy won virtually every exchange, using his trademark distance work to remain on the outside of MacDonald’s attacks. A few times “The Red King” rolled at Wonderboy looking for a leg, but Thompson calmly defended and made his way out of trouble.

Asked about what’s next after dispatching his friend MacDonald, Thompson was quick to demand a title shot.

“I was expecting it after the Hendricks fight. It kind of stinks that I had to face Rory tonight because he’s a friend,” Thompson said. “But hopefully after this fight – I finished Jake Ellenberger, Johny Hendricks, and I had the toughest fight of my life tonight against (MacDonald) – I get the shot.”

At whatever weight Donald “Cowboy” Cerrone competes, it’s safe to say he’s game for a fight. 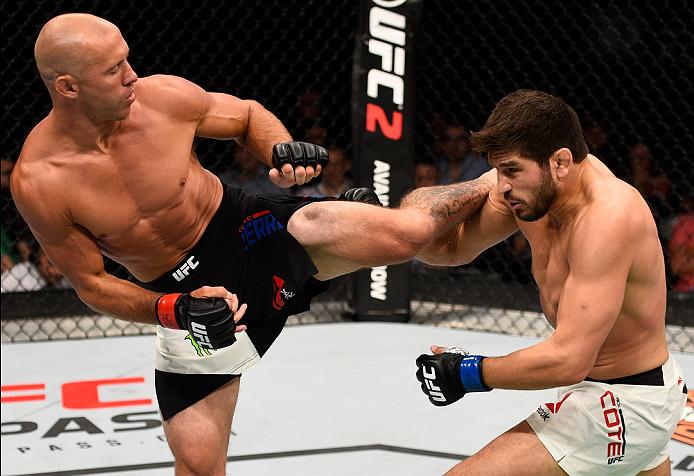 Against a significantly bigger Patrick Cote, Cerrone put on his best performance in recent memory, knocking down the former middleweight title contender three times before finishing by TKO in the third round.

After the big win Cerrone wasted no time pontificating about his next fight. He doesn’t like to wait long between bouts and is hoping to turn around and fight again next month during International Fight Week, when there are 36 fights in three days. Cowboy is hoping somebody falls off a card so he can step in.

A pair of underwhelming performances by Joanne Calderwood after building momentum on the heels of Season 20 of The Ultimate Fighter had many wondering what happened to the fierce-striking Scot.

Calderwood reminded everyone that she hasn’t gone anywhere.

The match up between Calderwood and Letourneau was the first female flyweight bout in UFC history. It looked like the perfect new home for Calderwood, but without an active division, she’ll still likely need to make the cut down to 115.

No matter where “JoJo” fights, her performance in Ottawa puts her right back in line with the rest of the contenders at 115 or 125. Calderwood’s head movement was improved and her takedowns were on point. She made the move to the famed Tristar gym in Montreal for this fight camp and the results were excellent.