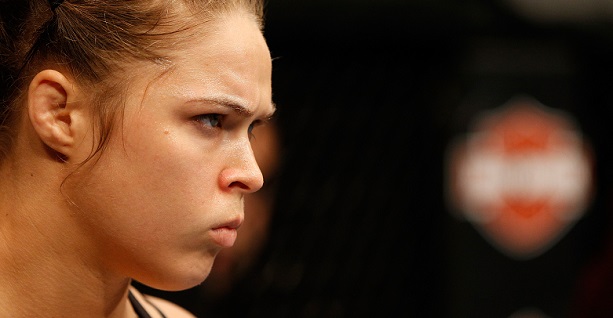 “Grapple Girl” nearly got it right.

“The sport is growing by leaps and bounds,” Michelle “Grapple Girl” Farrow once told me, referring to the topic of women’s MMA.  “It is starting to get more recognition all the time. Most shows are trying to have a women's fight on their card. I think that within the next five years it will be accepted almost as much as the men.”

The year was 2001. Men’s mixed martial arts was having enough of a hard time getting accepted by the public at large, with it not being until 2005 and the launch of The Ultimate Fighter that the sport started to see a light at the end of the tunnel.

As for the ladies, their climb was even more of an uphill one. Farrow was one of the first to make a name for herself on the scene, fighting in Rage in the Cage events in Arizona after transitioning to the sport from jiu-jitsu. She made her pro debut in 1999, and back then, critics said this was something that women in polite society just didn’t do.

“The worst reaction that I got was at work, when I first started,” she recalled before her May 2001 bout against Jamie Lynn Welsh. “I work for a Fortune 500 Company and I was coming into work all banged up and bruised.  My boss assumed that I was a victim of domestic violence and tried to send me for counseling. I just laughed it off and built a website to show people what I do.

”My mother has no idea I do this, I haven't spoken to her in years,” continued Farrow. “My dad is supportive, but doesn't quite understand the scope of what I do; he has only seen tapes of me grappling. We just broke the news to my in-laws, and they aren't too thrilled. They prefer not to talk about it.”

Farrow won that fight against Welsh by submission, one of six victories she compiled in eight fights until her last bout in 2006. The way she saw it back in 2001, 2006 was going to be the breakthrough year for her sport. It wasn’t, not for her, and not for any of her peers who were taking the long road to acceptance.

2006 did mark the debut of a young lady named Gina Carano though. And with her looks and exciting striking style, she put female MMA on the front burner, finally opening the door for a segment of the sport that needed and deserved respect. But 2011 was the real tipping point, as that year saw the dawn of a new era for women in mixed martial arts thanks to the pro debut of an Olympic Bronze medalist in judo for the United States named Ronda Rousey.
-----

Watch Episode 1 | Watch Episode 2
-----
Current UFC matchmaker Sean Shelby was running the ship for Strikeforce then, and I won’t forget him telling me about this fighter he was about to sign. He raved about Rousey’s skill, but knowing that I was the skeptical sort, he sent me to YouTube to investigate for myself.

Shelby, always an astute judge of talent, was right again. So when Rousey was officially signed, I immediately got her on the phone in order to help introduce her to the masses. Well, as anyone who has interviewed Rousey can attest, she didn’t need anyone’s help. All she needed to do was be herself, and it was off to the races.

And it wasn’t just her looks, her attitude, her candor, and her story; Rousey brought a menace to her fights that had never been seen in women’s MMA, and that hadn’t really been seen in combat sports overall since a prime Mike Tyson was wrecking opponent after opponent. She was a true crossover star from the first time she put gloves on, and that was the point all along. 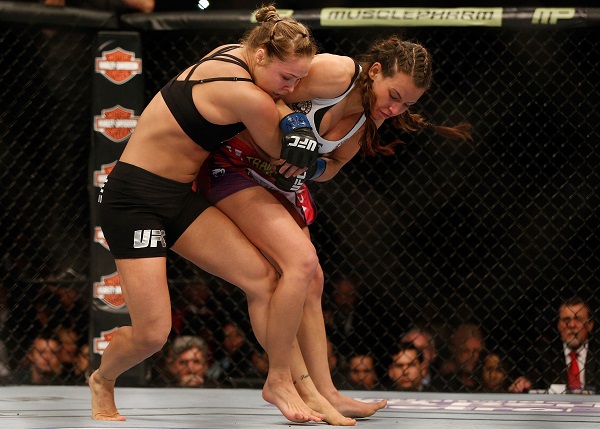 “I want to be the undisputed, best pound-for-pound woman in the world in MMA, and I want to do it while looking good and being entertaining,” she told me before she submitted Sarah D’Alelio in 25 seconds in August of 2011. “I want to bring women’s MMA up to be just as respected as the men, and I feel that if there’s something you want to get done, you gotta do it yourself. I can’t trust anybody else to do it for me, and I’m willing to put the work in and be that person.”

She is, and she has. On Saturday night, Rousey will be the co-main event of the biggest event of 2014 thus far, defending her UFC women’s bantamweight title at UFC 175 against Alexis Davis.

> Go Behind The Scenes With Ronda Rousey on Yahoo

She’s already headlined two UFC events, has been a sought-after actress in Hollywood, and she’s opened the door, not just for the bantamweight women in the UFC, but for the soon-to-come strawweights. These days, no one looks at a female mixed martial artist and oohs and aahs in a negative fashion. It’s an ooh or an aah because of that armbar, or that double-leg takedown, or that kick to the head.
That’s all the women in this sport ever wanted, to be respected and to get the same opportunities the men do. It was a long time coming, but that day is here.