The Other Side of Ramsey Nijem

"Losing two fights in this sport is not an easy thing to handle, so I
took a good look and realized I’m not unstoppable and I need to work on
where I am stoppable." - Ramsey Nijem 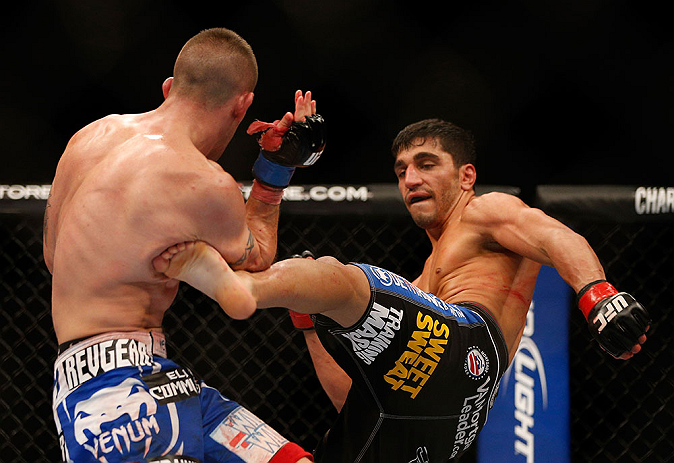 If you were going to describe the personality of UFC lightweight prospect Ramsey Nijem, laid-back would often be the first thing to come to mind. But if it did, you’ve obviously never seen him cornering one of his teammates on fight night.

“I’m actually a pretty emotional guy as far as fighting,” he laughs, with the latest manifestation of the other side of Ramsey showing up when he cornered Steven Siler in his November bout against Dennis Bermudez. Trying to almost will his teammate to win, Nijem was a no-nonsense motivator from start to finish, looking like he had been through a three round bout himself after the final bell sounded. “I always expect to win and expect my guys to win, so I get like that. I just try to keep all emotions in check when I’m actually out there fighting. I don’t want to get emotional and get a little bit wild, but if I don’t keep myself in check, that’s what happens.

“I’m actually a really intense human being,” Nijem continued. “A lot of people don’t realize that because I’m joking around, but it’s pretty extreme. I’m usually really relaxed, having fun and joking around, but that intensity switch will flip really fast. I gotta keep it focused.”

To keep that focus, Nijem says that good breathing techniques and the realization that he put in the necessary work in the gym keeps him focused on fight night, and as he gets ready for his Wednesday matchup with former Ultimate Fighter cast mate Justin Edwards, he believes he’s done the work and made the adjustments that will help him snap a two fight losing streak. One of those adjustments? Realizing that in the UFC, you can’t rest on past laurels, and for Nijem, those laurels included a three fight winning streak.

“It really feeds your ego, and you’re feeling like you’re on top of the world,” he said of the string that saw him beat Danny Downes, CJ Keith, and Joe Proctor before losing to Myles Jury and James Vick. “I felt like I was unstoppable. I’m not being disrespectful, but I won all those fights in a pretty dominant fashion. And even the Jury fight, I just chalked it up as a loss. I got caught and I was winning the fight. I felt great, I felt strong, there was nothing wrong, it just happened. But after the Vick fight, I really took a good, hard look at myself. Losing two fights in this sport is not an easy thing to handle, so I took a good look and realized I’m not unstoppable and I need to work on where I am stoppable.”

Part of that process included moving to the Bay Area where he grew up to train with Tareq Azim and his team in San Francisco. He still maintains a good relationship with The Pit Elevated team in Utah, but he wanted to get some new looks that he most certainly has with training partners like Jake Shields.

“I lost my last couple fights, so what I was doing wasn’t really working,” he said. “And that’s no disrespect to my guys; those are still my best friends and my training team, but I just wanted to mix things up, get some new coaches and some new partners. I’ve known Tareq Azim for a while and he really is an intense person and he has the same kind of mentality and focus that I feel like I have, so he matches it well as a coach, and that’s what I decided I needed. I wanted to come work with some of the best grapplers in the world like Jake Shields, and these guys out here are pretty damn good on the ground and their feet, so it kind of exposed my holes and helped me fill ‘em up for the next fight.”

It’s a mature outlook for a young man that could have easily said that he simply got caught in his knockout loss to Jury and his submission defeat against Vick, but instead said – at least after last August’s loss to Vick – some things need fixing.

“I could easily chalk it up to being one of those things and I know that, but it’s a game of inches, and when you’re getting caught, there’s obviously a flaw there,” he said. “The first loss I chalked it up to a loss and didn’t really fix it, and the second one, it showed that I didn’t fix anything. I know I could beat both those guys on any given day, but they got me that day, and that’s why I’ve got to completely close every hole and not give anyone any chance to beat me in any aspect of any fight.”

Which all points to him being the wrong guy for former welterweight Edwards to test the 155-pound waters against. And Nijem makes it clear that “Fast Eddy” may not be ready for what he’s getting into against the lightweights.

“One of the biggest things is speed,” he said. “And he’s not going to be stronger than everyone. I think he’s expecting to drop down to 155 and be stronger than all the competition, but in reality, I’m a big ‘55er. And these guys are faster and it’s a more technical game. The lighter you get, the more technique plays a part, and everyone’s tough. I feel it’s the hardest division in the UFC right now.”

As such, every fight is an important one, every win keeps you alive, and every loss sends you further down the ladder. Nijem may be on the ropes at the moment, but he plans on firing on all cylinders in 2014.

“2014’s going to be a good year for me,” he said. “I’m gonna go out there and really make a statement at ’55. I’ve had fun, it’s been a great ride, and I could easily retire or be one of those fighters that was really good but could have been really great. But I made the decision that I want to be a great fighter and I’m going to sacrifice everything and put a hundred percent of myself into it and really be serious.”