The Octagon is Rachael Ostovich's happy place and Saturday she'll enter it for a pivotal matchup against Paige VanZant
By Thomas Gerbasi • Jan. 16, 2019

The last two months have been about everything but fighting for Rachael Ostovich.

On Saturday, it’s her night, and nothing matters but the fight.

“That is definitely my 15 minutes and I’m so grateful for that because in this day and age, it’s hard to get out of the busyness and the opinions of other people,” she said. “It’s my happy place. I wouldn’t say it’s the most relaxing place (Laughs), but it’s the place where I get to test myself physically, mentally, and all-around as a person.”

It’s where she’s wanted to be since July 2018, when she saw her UFC record go to .500 with a loss to Montana De La Rosa. It was a disappointing turn of events, especially after an impressive Octagon debut seven months earlier against Karine Gevorgyan. But that’s the fight game. Sometimes it’s just not your night. 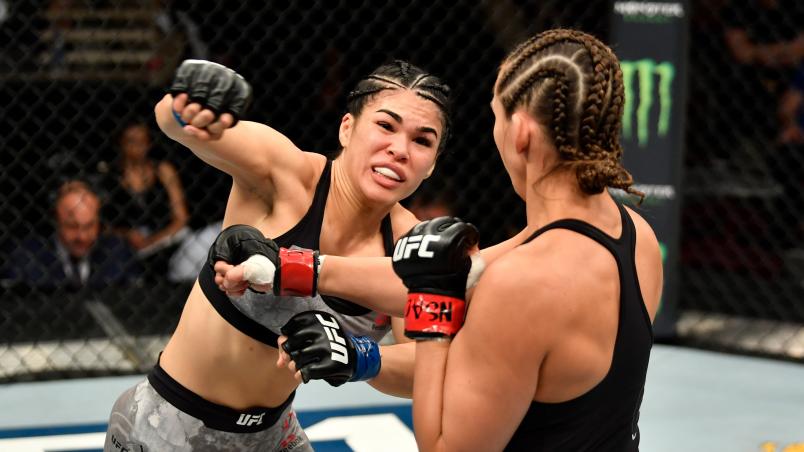 But in November, everything went haywire when she was assaulted by her husband, Arnold Berdon. The incident made headlines around the MMA world and beyond, and suddenly all the questions for the 27-year-old weren’t about her January 19 return against Paige VanZant. It wasn’t easy to deal with, but she took it all with grace, and as soon as doctors cleared her, she let the UFC know that she was ready to fight. That met with some puzzled responses from media and fans, but it made perfect sense to Ostovich.

“I think most people aren’t really trying to get it,” she said. “They’re just taking it as it is. They can’t even imagine themselves being in a cage and doing what we do. But when I share my input, they respect it. And I love when people share what they do and what they love doing, and hearing other people’s passions motivates me and inspires me and I hope I can be that same motivation for other people.”

Just by taking the walk to the Octagon in Brooklyn’s Barclays Center this weekend, Ostovich is motivating and inspiring people. It’s part of the reason why she describes this bout as “life-changing.” That’s big picture. But when it comes to the fight itself, it’s one that can be career-changing for the former Ultimate Fighter competitor.

“This is just the next fight and I’m gonna treat it just like any other fight and not overthink things or let media get to me or my circumstances get to me,” she said. “I want to focus on my technique, what needs to get done, the game plan. In that aspect, it’s a fight. But when I step back and step out of it for a bit and I look at it, I know that this is going to be the biggest fight and this is the fight to win. And there is no other option for me at this point. I need to win and I will win this fight. So I’m just manifesting it and speaking it forth.”

Life-changing. That’s a lot to put on 15 minutes in an Octagon, but in the fairly new UFC women’s flyweight division, a win over a big name like VanZant could put the Waianae product in the top 15. Another win, top ten; another, top five, and you get the picture. This time next year, and Ostovich could be in the title race at 125 pounds.

“To look at it and imagine it and think about things after this win, it is exciting,” she admits. “But that’s not the goal here. I want to move forward in my career and I feel like winning this fight would definitely be a step in the right direction; maybe a couple of steps. (Laughs) I’m blessed to get these opportunities and I want to make the best out of it. I know what I need to do. Like you said, it could be three fights and I’m in the conversation for a championship. And that’s all it is sometimes. You’re putting in that work and grinding every day and thinking positive and working through whatever you have to, whether it’s personal problems at home or in the gym or professionally. It’s life. I think that’s why I love fighting so much – it’s just like life.”

Life is a fight sometimes. Rachael Ostovich is winning that fight. I bring up a quote she gave me back in October 2017, when she said, “I feel like all the pieces are coming together like that nice puzzle.”

How does that puzzle look now? She laughs.

“I believe the pieces have been coming together, but apparently this is a really big puzzle. So it’s just taking a little longer, but we’re getting somewhere.”

That’s all she can do. Keep getting somewhere and eventually she’ll reach her destination.

“Of course this is a much bigger fight, it’s much more high-profile, there’s a lot of stories surrounding this fight and that’s all there, but if I choose to focus on what’s important, which is the fight itself, then all those things fade away,” she said. “Walking into the cage, when that bell rings, you get tunnel vision and start to zone in on your opponent and what is ahead in that moment. There’s so much about living in the past and living in the future, but we’re not present. But when we’re fighting, we’re forced to be present. And I just love that. There’s nothing else in the world. It’s you and your opponent.”