OSP Thinks He Has Advantages 'Pretty Much Everywhere' Against Reyes 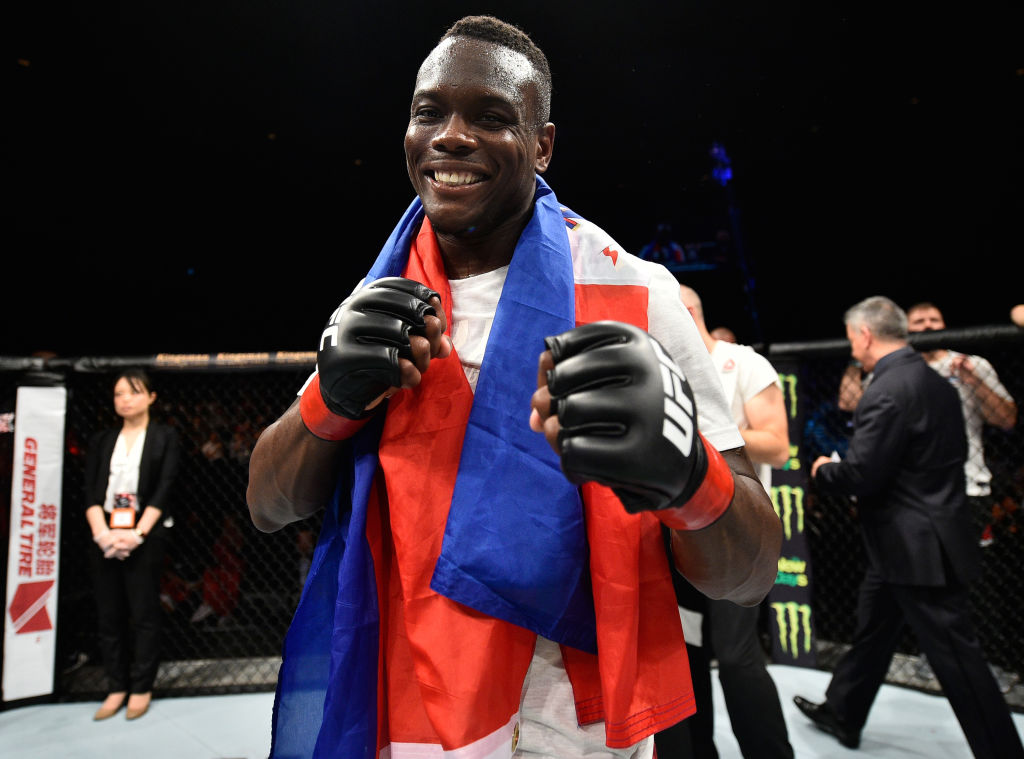 Ovince Saint Preux celebrates his submission victory over Yushin Okami of Japan in their light heavyweight bout during the UFC Fight Night event inside the Saitama Super Arena on September 22, 2017 in Saitama, Japan. (Photo by Jeff Bottari/Zuffa LLC)" align="center" />Ovince Saint Preux will enter the octagon on October 6 as the underdog, and he’s not entirely sure why. With 17 UFC fights under his belt, Saint Preux has displayed everything from unorthodox submissions to devastating knockout power.
That said, his opponent, Dominick Reyes, has finished all three of his UFC fights in the first round and in impressive fashion. That hot start is likely why Reyes is favored heading into Saturday night, but Saint Preux is far from impressed.
We caught up with Saint Preux ahead of his fight with Reyes to discuss the growth in his own career, the importance of experience and what he wants next should things go his way at UFC 229.
____ ____ ____
UFC: First off, how are you feeling?
Ovince Saint Preux: Fight week is you're looking forward to the fight, but you're not looking forward to the week, but I have to do it though.
UFC: How has the momentum grown for you from fight to fight, and what do you feel is next for you if things go well on Saturday?
OSP: Definitely feel momentum is a gamechanger for me just because as long as I have that momentum going, I end up being pretty good. Fighting Tyson, going to Singapore, it was beautiful, amazing, somewhere I wanted to go, and now, fighting the biggest card of the year, that's what I was shooting for, and I got on the card. It's definitely not a gamechanger, it's just an opportunity where everybody can see you, especially with this card right here, it's probably going to be the most seen card in the UFC ever.
UFC: What makes you so dangerous?
OSP: You really don't know what's going to happen. I got knockout power in my hands, feet, I got good wrestling, and more than likely if I get on the ground, I've got unorthodox finishes that you probably won't see.

UFC: What have you seen from Dominick Reyes? He's undefeated in the UFC, but where do you see your advantages?
OSP: The advantages for me is experience. It's different. I say a lot of times, when you break into the top 15, it's cool. You get excited. Then the top 10 comes around, and the same thing you were doing against guys who weren't in the top 15, that you were doing to guys who were in the top 15, you can't do it in the top 10 and top 5. That becomes really different. That margin for error is that small. You got to capitalize on it. Early on in the Tyson fight, I was in trouble, and that margin of error, he didn't capitalize on it, and guess what? I capitalized on it.
UFC: Where do you see the advantages against Reyes?
OSP: Pretty much everywhere. I think my wrestling is a little better than him. My ground game is a little better than his, also my striking.
UFC: What are some things you can't replicate until you've faced the top fighters in the division?
OSP: Just the fight itself. As much as you want to, you can't replicate the fighter that you're going to fight, so when it gets down to it, it's how fast can he adapt to my style, or how fast can I adapt to his style. I don't have a typical style that people can adapt to right away.
UFC: Where has your style and your game grown over your last few fights?
OSP: Pretty much everywhere. I've learned when I train to keep everything at a slow pace. My trainer always tells me, 'Slow is smooth, smooth is fast.' As long as I keep that type of face, even in a fight, when I slow everything down, I just see everything a lot better now, and all my submissions that I want, I don't even want them right there. When I slow things down, I can pretty much start choosing what I want. I can bypass this, bypass that, I know he's going to give me this, so I'm just going to go ahead take that. Everything just moves a lot slower now, even with my striking, my wrestling and everything like that.
UFC: What's your favorite way to finish a fight?
OSP: Either a submission someone has never seen, or a knockout. Definitely a knockout. I love knockouts.
UFC: Why do you think a fighter with your experience is coming in as an underdog?
OSP: Man, I don't know. It baffled me. I'm going on my 18th fight in the UFC, and I've fought the who's who, and I think he only has three fights in the UFC. I'm not trying to downplay him or nothing, but I don't know. It's the experience level. There's a difference when you fight someone in the 205 division, but I'm one of the probably bigger, stronger, faster 205-pounders out there, so that makes a big difference when you give him somebody. When I get on top of somebody, if you get up, you're wasting a lot of energy getting up because when I get on top of you, I'm murdering people.
UFC: Let's say it goes well on Saturday night. What do you want next?
OSP: Pretty much anyone in the top 5. There's no room to wait around. Hopefully I can get one before the calendar year is over with.
Order UFC 229 here!
Zac Pacleb and Gavin Porter are writers and producers for UFC.com. You can follow them on Twitter @ZacPacleb and @PorterUFCNews.