OSP has fought nearly everywhere but home, that changes Saturday 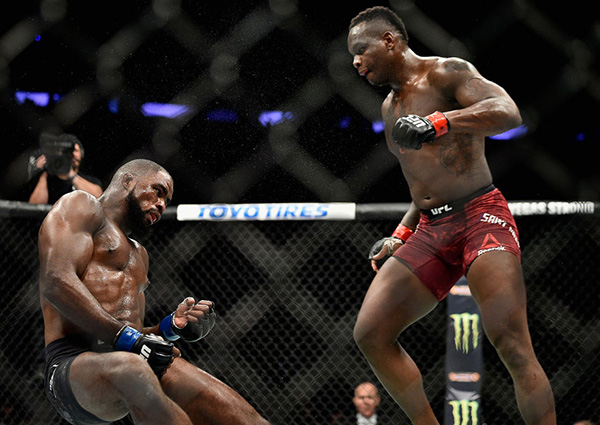 Ovince Saint Preux knocks out Corey Anderson in their light heavyweight bout during the UFC 217 event at Madison Square Garden on November 4, 2017 in New York City. (Photo by Jeff Bottari/Zuffa LLC/Zuffa LLC via Getty Images)" align="center" />
No one ever wants to have his fight delayed, but for Ovince Saint Preux, having his bout against Ilir Latifi moved back a month turned a dream into a reality.

Over the course of his nine-year, 32-fight career, Saint Preux has competed throughout the United States and in various foreign ports of call.

He took part in a one-night tournament in Aruba and followed it up with a bout in San Juan, Puerto Rico. He knocked out Jason Day in eight seconds in Lloydminster, Saskatchewan, forced Ryan Jimmo to tap in Vancouver, British Columbia and dropped Brazilian legend Mauricio “Shogun” Rua with a short left hand before a stunned crowd in Uberlandia.

The one place he hasn’t fought yet is his home state of Florida.

“I’ve been everywhere,” said Saint Preux, who will step into the cage in the Sunshine State for the first time this weekend when he faces Latifi on the main card of Saturday’s UFC on FOX event at the Amway Center in Orlando. “I’ve fought at Madison Square Garden. I’ve fought at the MGM Grand. I’ve fought in California.

“When you talk about mixed martial arts, one of the best places to fight is in Japan and I’ve fought there before, but I’ve never fought in my home state,” he added. “Even Tennessee, where I started my career – I’ve fought here in Tennessee four or five times already, but it’s different fighting in the state I grew up in. Florida is everything I knew until I got to college.”

Because he lives and trains primarily in Knoxville and played ball for the Volunteers, Saint Preux’s ties to Florida don’t often come up, but for the 34-year-old light heavyweight, this weekend’s event in Orlando is more of a homecoming than any of his six appearances in the cage in Tennessee.

He was born and raised in Immokalee, Florida and went to the same high school as four-time Pro Bowler and two-time NFL rushing leader Edgerrin James. He wrestled, ran track and played football, where he made All-State as a senior.

Immokalee is less than 200 miles south of Orlando – a little over three hours depending on whether you take Florida’s Turnpike or US-27 South – and you best believe there will be a sizable, vocal contingent making the trip to cheer on Saint Preux this weekend.

“I don’t know how many people are going to end up making it because it’s a last-minute type of deal, but we’ll see,” said Saint Preux, who enters the contest on a three-fight winning streak. “From what my brother was telling me, there is going to be a good crowd of people trying to make it up to Orlando, but that’s not including everybody that grew up with me that already lives in Orlando.

“I have family that lives in Orlando – tons of family.”

That family, many of whom will be seeing him compete live for the first time, are catching the 22-10 light heavyweight talent while he’s in the best form of his career.

After enduring a rough patch that featured four losses in five appearances spanning from August 2015 to last year’s Super Bowl Saturday card in Houston, Texas, Saint Preux has once again found his rhythm inside the Octagon.

He earned consecutive victories over Marcos Rogerio de Lima and Yushin Okami using a Von Flue choke, prompting some within the MMA community to start calling it the “Von Preux choke,” a portmanteau combining his name and that of the choke’s originator, Jason Von Flue, the Ultimate Fighter Season 2 contestant who first used the guillotine choke counter successfully against Alex Karalexis at UFC Fight Night 3 more than a dozen years ago.

He followed that up by replacing Patrick Cummins and knocking out Corey Anderson with a swift kick to the head 90 seconds into the third round of what was a close back-and-forth contest at UFC 217 in December.

Even though this weekend’s contest with Latifi was pushed back a month, it’s still Saint Preux’s third fight in six months, a pace his coach Eric Turner likes for his charge, even if his fighter isn’t always as keen on the idea right out of the gate.

“I tell my coach that I fight too much, but he tells me some of my best performances are when I fought back-to-back-to-back or when I’ve taken fights on short notice,” admitted Saint Preux, who begrudgingly took a handful of days off when the bout was initially scuttled before regrouping and returning to the gym.

“The thing about being in training camp is the consistency and the wait factor. The longer a layoff is, the more distractions you’re going to have. The shorter it is, I can hit it fast and quick and I know I can hit it with everything that I’ve got. Plus, at the same time, I don’t get my weight out of control.”

His current run of success has carried Saint Preux to the brink of contention in the light heavyweight division and a win over Latifi will only further strengthen his position as a Top 5 talent in the 205-pound ranks.

From there, the division’s most active fighter would only be a win or two away from challenging for championship gold.

Just as he knew he would one day get to compete in his home state, Saint Preux knows his time as a title contender will come. In the meantime, he’s just going to trust the process that carried him from a 0-2 start and early career struggles to a place amongst the elite in one of the marquee divisions in the sport.

“The way that I’ve broken into the Top 15, Top 10, Top 5, now I have to just continue to do the same things. The key is not to change anything too drastically. As long as I keep doing the same things, I’ll be perfectly fine.

“I’m not straying away from the process. I’m making my life a lot easier and my trainers keep me humble too. I don’t have a lot of distractions and I think that’s a big thing.

“As long as I keep doing what I’ve been doing, I’ll be good.”