OSP Happy with Move to the Main Event

"It’s a step up, but it’s real exciting and I’m definitely looking forward to the fight." - Ovince Saint Preux 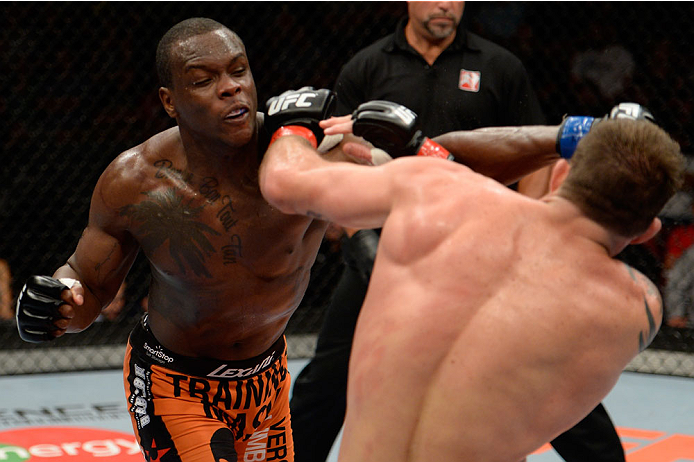 Some would say that Ovince Saint Preux has gone through a rollercoaster of emotions since his last fight against Ryan Bader in August.

To start, he lost for the first time as a UFC fighter to Bader in Maine, but then got selected for a co-main event slot against Rafael “Feijao” Cavalcante on this Saturday’s UFC Fight Night card in Uberlandia, Brazil. So far, so good. But soon after, Cavalcante got injured and withdrew from the bout, with relatively unknown Francimar Barroso getting the call to face OSP.

Saint Preux isn’t just anyone, but he did feel a little odd when he woke up last Wednesday morning.

“It was a good day, but I felt like something was going to happen,” he said. “And when the whole situation happened, it was like ‘okay, this was meant to be.’”

The “whole situation” began with Jimi Manuwa getting injured and pulling out of Saturday’s main event against Mauricio “Shogun” Rua. The next one to get a phone call? Saint Preux’ manager Joey Zonar, who got an offer for his fighter to move up a slot and fight Shogun in the main event on FOX Sports 1.

Saint Preux accepted, despite going up against one of the sport’s true superstars in a short notice five-rounder after training for a three-round bout. The Tennessee product brushes off any such concerns, and easy thing to do after going 25 minutes in his decision loss to Bader.

“In the last two rounds, it’s all about keeping yourself active and pushing yourself,” he said. “I went into the fifth round with Bader and I didn’t feel bad, and I would think Bader’s cardio is a little better than Shogun’s.”

Rua has faded late in fights in the past, and he hasn’t seen the “championship rounds” since going into the fourth against Brandon Vera in 2012. So despite the Brazilian having more experience in five-round bouts, the one who’s been in those deep waters most recently is OSP, and he feels that having been there is half the battle.

“I learned a lot from my last fight,” he said. “At times I came out a little too aggressive in the beginning of the round and kind of faded toward the end of the round and Bader took advantage of that. It was my fifth fight in the UFC, it was his 15th fight and he fought like a veteran. I have that experience now and I know what to expect. All I have to do is go out there and do what I’ve been doing in training.”

As for the other half of this equation, Saint Preux is well aware that he is fighting an icon of the sport in his backyard of Brazil. The 31-year-old, an admitted fan of Shogun, considers fighting your heroes part of moving up the ladder in the light heavyweight division, and a win over Rua does a heckuva lot more for his career than a win over a talented but still under the radar fighter like Barroso.

“At one point in time, everybody’s been a fan of Shogun’s,” he said. “You talk about kickboxing and going after slick leglocks and stuff, that was Shogun. You talk about knocking people out, that was Shogun. But it’s just one of those situations where it’s eventually gonna happen. I knew I was going to end up fighting one of these guys; I just have to make the best of it. Right now, I feel like he has everything to lose. I’m coming to his backyard and of course the Brazilian fans will let you know who they’re rooting for (Laughs), but at the same time, I feel like all the pressure’s on him.”

And Ovince Saint Preux, he just has to show up and do what he does best.

“It’s a step up, but it’s real exciting and I’m definitely looking forward to the fight.”