Ortiz Wants to Be the Next Great Flyweight

"I’m going to take him out of his comfort zone, push the pace and make him do things he doesn’t want to do." - Dustin Ortiz 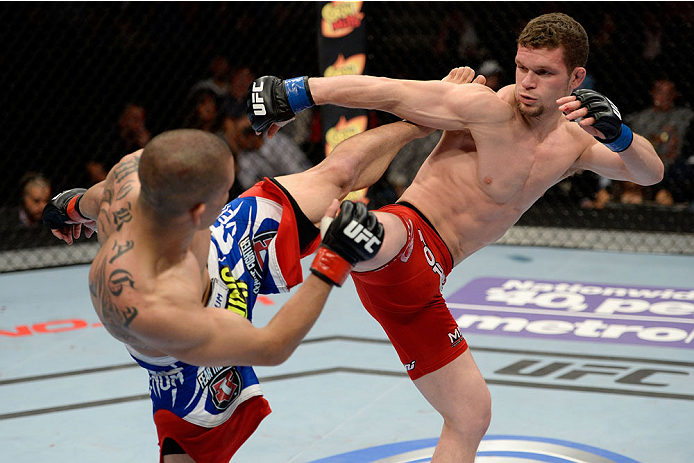 Dustin Ortiz came to the UFC with his sights set on making it to the top of the flyweight ladder. And while the 25-year-old is still a few victories away from reaching his goal, he’s certainly not wasting any time putting in the work it will take to get there.

After three years of developing his skills and finding success on the smaller stages around the sport, the Franklin, Tennessee native finally received the call to compete inside the Octagon.

While there is a unique amount of pressure that hangs over a fighter making their promotional debut with the UFC, Ortiz had the added element of doing so in the chaotic realm that comes whenever the organization hosts an event in Brazil. That situation becomes all the more amplified when facing a Brazilian fighter in front of his home country fans, and those are precisely the dynamics that came together for Ortiz’s first showing inside the Octagon.

Nevertheless, the Roufusport fighter rose to the occasion and stopped Jose Maria Tome in the final round of their tilt with a flurry of punches. His strong performance served as a proper introduction to the UFC fanbase, and allowed him to make an immediate impact with the UFC brass in the process. The latter was verified when the organization matched him up with recent title challenger John Moraga for his next outing at Fight Night: Rockhold vs. Philippou in January.

While Ortiz would ultimately come out on the losing end of a razor-thin split decision against the MMA Lab product, he gave Moraga all he could handle throughout the 15-minute affair. That said, setbacks of any variety are a difficult thing to swallow at the highest level of the sport and the loss to Moraga wasn’t one that went down easy by any means for Ortiz.

“There are some things you just don’t get back and a loss is definitely one of them,” Ortiz said. “Even if you get a chance to go back and fight that fighter again down the road, you’ll never get the loss from the first fight back. It is still there and will always be there. All you can do is move forward and put your focus on performing in your next fight and trying to be the best fighter you can possibly be.

“I wasn’t bitter about the [Moraga] fight, and it made me a better fighter. I used it as motivation for the next fight and I’m using it for motivation for this fight coming up. I’ve done that with any losses I’ve received and turned any negatives into positives. That’s what you have to do because a loss is like medicine. You don’t want to take it but it’s going to make you better.”

Although the loss in Atlanta snapped his four-fight winning streak, Ortiz was determined to get back on track and reignite his momentum toward a run at the 125-pound throne. Where his next bout against Ray Borg would also result in a split-decision, this time around the judges saw things in his favor, and Ortiz had his hand raised at fight’s end. Not only did the victory serve to put him back into the win column, but the gritty affair was also a positive add in the experience department, as Ortiz battled at a high pace over three rounds of back-and-forth action.

Anytime a fighter can come out on the winning end of a battle the likes of what went down with Borg is a step in the right direction, especially in a realm where the window for education is a limited gap. Ortiz once again took whatever positives he could from the matchup and jumped back into training as he looked forward to the next opportunity that would come down the pipeline.

“I felt really good coming into that fight,” Ortiz said. “I had watched a couple of his fights and I knew he was going to be super-scrappy. I knew his ground game was going to be good, but he kind of surprised me by just how fast he was when we hit the ground. There were some adjustments I had to make during the fight and it felt great to get the win. I felt good about my performance during the fight

Despite the 125-pound weight class still being relatively new to the UFC banner, and still very much a work in progress, several fighters have clearly established themselves as the divisional elite. With a limited amount of depth in the 125-pound ranks, a fighter can shoot up the ladder quickly, and with two wins in three showings inside the Octagon, Ortiz was moving north at a solid clip.

After his win over Borg, Ortiz knew his next challenge would come against solid competition, and his notion proved to be spot on. The surging prospect will step in against his peer in the expectations department as he will square off with Justin Scoggins on the TUF 19 Finale card this Sunday. Much like Ortiz, “Tank” has made an immediate impact on the sport’s biggest stage as he’s cruised to dominant victories in his first two outings under the bright lights of the UFC.

While the two fighters couldn’t be more different stylistically, Ortiz believes their respective willingness to get after it will make for an exciting tilt. He fully expects to see the unorthodox attacks Scoggins is quickly becoming known for, and he believes he’ll have the answers to that puzzle on July 6.

“[Scoggins] throws a lot of unexpected techniques at unexpected times, which makes him really difficult for a lot of fighters to deal with,” Ortiz said. “I plan on sticking to my game plan that my coaches at Roufusport have put together and my teammates have been working on with me. It’s not a super-detailed game plan because I’m not the kind of fighter that likes to go in there with a ton of things planned out. I like to get in there and make the adjustments I need to on the fly because you need to be able to keep rolling if something isn’t working out.

“I prefer to be open minded in there and do my thing. I’m not going to play into his game plan like everyone else he’s fought has. He’s been so successful because the guys he’s faced have all played into his strengths and that is not going to happen with me. I’m going to take him out of his comfort zone, push the pace and make him do things he doesn’t want to do. That’s how I believe I’ll get the win in this fight.”

The matchup between the two highly-touted flyweights will determine which of the two will rise into the elite tier of the 125-pound fold, and who will need to stay back to further develop their skills. Ortiz believes it is his time to jump into the upper tier and he has every intention of adding the first blemish to Scoggins’ professional record.

“[Scoggins] is undefeated and he already has a couple of wins in the UFC, which is huge,” Ortiz said. “Honestly, when I look at things in this division, I can’t see a better matchup anywhere that is better than this fight we have coming up. He’s so talented and everyone loves to watch him fight. I think we are both part of the next great wave of talent coming up in this weight class. The winner of this fight is just going to go to the top of this division, and I don’t see anyone in the weight class that either of us can’t beat. This is a super-exciting fight and it means a lot for both of us.”