"I hope Bader thinks I’m a stepping stone, that I’m a nobody. He called me out thinking that, and he’s gonna be in a lot of trouble if he thinks that way." - Tito Ortiz 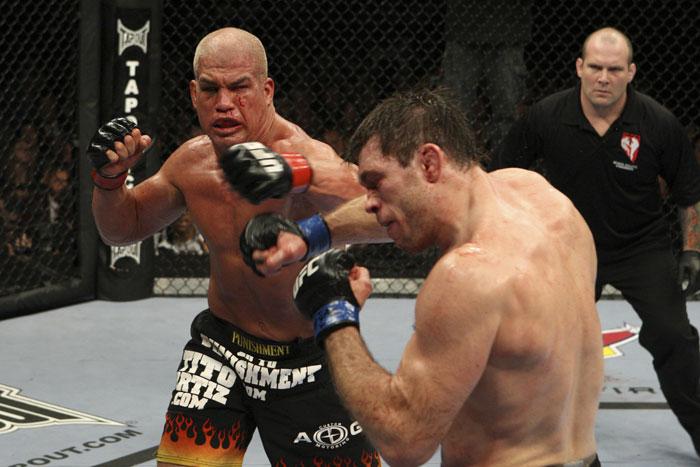 There was a time when Tito Ortiz was invincible. Back before Forrest Griffin and Stephan Bonnar opened up the floodgates for the mixed martial arts explosion in 2005, it was “The Huntington Beach Bad Boy” who ruled the UFC roost, becoming the organization’s first true superstar as he defeated the likes of Wanderlei Silva, Evan Tanner, Ken Shamrock, Vladimir Matyushenko, and Yuki Kondo.

He knew it too.

“Before I fought (Randy) Couture and lost to him (in 2003), I thought I was invincible,” said Ortiz. “I thought I was gonna walk through Couture and I should have given him a lot more respect. But he outwrestled me and beat me for my title.”

It was Ortiz’ first dose of reality in the harsh fight game. His early losses against Guy Mezger and Frank Shamrock could have been chalked up to inexperience and cardio issues, and he addressed both, going on a six fight winning streak after his 1999 defeat to Shamrock. In those days, Ortiz was mixed martial arts in the United States, and it was a wild ride for someone who didn’t get handed anything on the way up the ranks.

“I remember being a young kid who wasn’t sure what to expect and who was training as hard as possible,” he said. “But I set a task in front of me to achieve, and I was getting my hand raised. At first I thought it would just be a couple fights and I’d go back to coaching and become a high school teacher. But I guess the opponents I competed against brought the best out of me and made me one of the best champions in UFC history.”

To this day, he remains the longest reigning 205-pound champion ever, but after the Couture fight, he was lost, not knowing what would happen after his upset defeat to the future Hall of Famer.

“It was hard to swallow, being the champion for five consecutive defenses and holding it for almost four years, and then you’re at the bottom of the bucket again,” said Ortiz. “It was a heart-wrencher, especially for me because I had nothing to fall back on – I didn’t have rich parents or a family to fall back on. I have myself and just myself. When I lost the title, I thought my future was done. But I sucked it up and continued on and continued to fight.”

Following a TKO loss to Chuck Liddell in his next bout, Ortiz ran off five consecutive wins, defeating Ken Shamrock twice more and also turning back Patrick Cote, Vitor Belfort, and Forrest Griffin. The bad boy was back, but a UFC 66 loss to Liddell in their 2006 rematch began a slide that has seen him go winless in his last five bouts, with four defeats and one draw. He’s only lost to top level talents like Liddell, Griffin, Lyoto Machida, and Matt Hamill, while drawing with Evans, and he’s also dealt with multiple injuries and surgeries, but in the eyes of many fight fans, at 36, he’s passed his sell by date, and is merely a stepping stone for his opponent this Saturday in Las Vegas, Ryan Bader.

When Ortiz says those words, it’s as if he’s addressing the world, particularly the doubters. He knows that over 14 years in the fight game and all the injuries have taken their toll. He’s well aware that the other two members of the triumvirate that ruled the division for so many years (Liddell and Couture) have already retired, and he is more than cognizant of the fact that in Bader, he’s fighting a young, hungry lion looking to use him as a high-profile victim on his resume.

And that’s fine, but make sure you remember that for fighters like Ortiz, the last thing to go isn’t the punch, but the pride. And the man who used to own the 205-pound weight class isn’t about to lie down and let Bader walk all over him. If he’s got something left, he’s bringing it to the Octagon Saturday night.

“I’m healthy, my surgeries have been one hundred percent, no problems at all, I can wrestle again and do the things that I wasn’t able to do prior and it makes me more confident,” he said. Those are the stock answers you would expect from any fighter leading up to a bout. But then you ask Ortiz whether he believes the old fight game adage that every great fighter has one great fight left in him, and then you hear him perk up.

“I hope so,” he said with a smile. “I’m training like it. I’ve been putting in the time and the work, I’ve focused a lot on my striking and takedown defense. Against Hamill I didn’t have it that much because I just wanted to punch him in the face, and I’m not gonna make those same mistakes. I hope Bader thinks I’m a stepping stone, that I’m a nobody. He called me out thinking that, and he’s gonna be in a lot of trouble if he thinks that way. He’s gonna have a tough fight on his hands. I’m going in swinging, defending shots, punching and elbowing and doing as much as I possibly can, inflicting as much damage in the quickest amount of time. I’m swinging for the fences and not holding anything back.”

He will live up to his words too, because now he’s seen his pride attacked. No one has given him the benefit of the doubt when it came to his injuries or his ability to still be in fights that he has lost. He’s just been pushed to the side as a guy sticking around too long.

“I think people have forgotten because I’ve battled against a lot of injuries but still fought top competition,” said Ortiz. He talks about wanting to get “build up” fights after returning from his injuries, but he knows that at the UFC level, there is no such thing. If you’ve been blessed to make it here, you’re also cursed in that there are no easy fights. There’s the possibility of a war every night, but that’s what he signed up for, and no matter what he may say, he still made that walk to the Octagon when they called his name.

Now it’s a new generation coming up though, and Ortiz has to deal with that reality. And even though he laid the blueprint for a lot of up and comers, he still believes that he’s got something they don’t.

“It really comes down to the heart,” he said. “How much more do they know than me? I don’t think it’s much. I’ve been in this game for a long, long time and it’s kinda like looking in the mirror a little bit. They’re a little bit younger, but do they have the same skillset or mindset as me, and are they as used to big fights as me? I don’t know, but I’ll push the tempo (against Bader) and test these boundaries.”

On Saturday night, Tito Ortiz walks into the Octagon he helped build, and if it’s going to be his last go round, he’s going to make sure Ryan Bader knows he’s been in a fight. And don’t count him out, because he’s got plenty of motivation to get back in the win column and resurrect his storied career.

“My boys are the biggest reason why I get up and train and do what I do,” said Ortiz of his three sons, Jacob, Jesse, and Journey. “I want to make sure they have a future and have nothing to worry about financially. I had problems coming up as a kid, and I don’t want my kids to have to worry about that. I really want to go on my own terms and I want to make sure that when I leave, I leave happy and proud, and I want my kids know that their father gave it his all. He did the best that he possibly could and he was one of the best champions the UFC ever had at light heavyweight.”