Before his final fight against Forrest Griffin at UFC 148 on July 7, we take a look back at Tito Ortiz’ Hall of Fame career in the second of a three-part series. 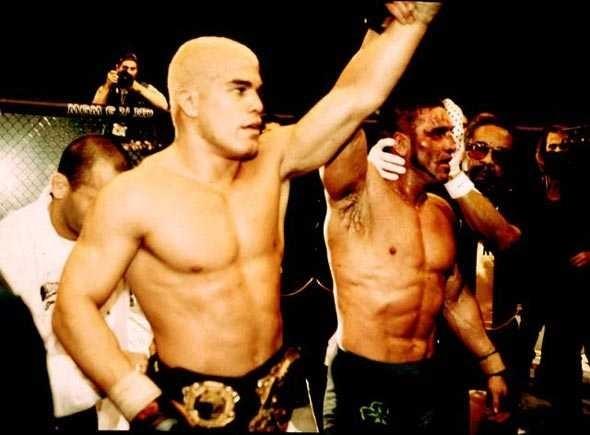 Mixed martial arts in April of 2000 wasn’t like it is today. Not even close. So when a relatively unknown 25-year old kid from Huntington Beach, California named Tito Ortiz went to Tokyo, Japan to face another virtual unknown in Wanderlei Silva for what was then known as the UFC middleweight championship, there were no pre-fight satellite tours, and no attention from FOX Sports, ESPN, or Yahoo.

A small contingent of internet sites and publications were keeping the sport alive at that time, but even they had to know that the writing was on the wall for the UFC, which was bleeding money and struggling immensely. Of course, all that didn’t matter on fight night on April 14, 2000, when Ortiz defeated Silva via unanimous decision for the belt vacated by the last man to beat Ortiz – Frank Shamrock.

Suddenly the former wrestler was a champion, and there was a spark in the sport because not only was he an athlete with the raw aggression and talent to stay on top for a while, but with his bleached blond hair and “bad boy” persona, he had the potential to appeal to people beyond the hardcore fanbase. That included women, kids, and casual sports fans, and he knew it. People love fights and fighters, but they love personalities even more, and Ortiz – a lifelong fan of Muhammad Ali and Hulk Hogan – was a charismatic personality.

“I think it really comes down to the fact that I try to entertain,” he said in 2007. “That’s my job.  When I first started fighting in the UFC, it really came down to entertainment.  A fight was a fight, but there was entertainment value.  When I stepped into the Octagon, I gave my whole heart and soul and it’s very personal to me.  I take training very seriously, so when the fight comes about, I have no doubts in my step.  I make sure that I’m fighting 100%, and when Tito Ortiz fights, it’s an event in itself, so I try to entertain and try to beat down my opponent.  I try to make it exciting for the fans that buy pay-per-views and the fans that are sitting in the front row, all the way up to the fans in the nose bleed seats.  They’re always gonna get a great fight out of Tito Ortiz, no matter what.  I just don’t take this as a payday – this is very personal to me.”

Yet all the charisma in the world won’t save you if you can’t fight, and after Ortiz defended his crown for the first time over highly underrated contender Yuki Kondo at UFC 25 in December of 2000, he was about to embark on a record-setting reign over the 205-pound division that would soon be renamed light heavyweight. But to reach the masses, he needed a little help, and that help came in the form of Zuffa, which purchased the UFC in early 2001 and got Ortiz out and about to push the sport in between training camps. And leading the charge was Ortiz’ former manager and the new president of the UFC, Dana White.

“When he’s out there fighting, he comes to fight,” said White of Ortiz in 2002.  “He fights hard, he’s fired up in the ring, that switch goes on, like he always says, and he’s a fighter.  When he’s outside the ring, he’s funny and always personable to the fans.  Tito can cross over and he does appeal to a wide audience, but it’s up to Tito whether he can be that guy.”

Tito was that guy, and when you thought of the UFC in the early part of the new millennium, you thought of him. From his pre-fight trash talk and Limp Bizkit and pyro-infused entrances to his ground and pound attack and post-fight t-shirts that told you just how he thought about the man he just vanquished, Ortiz had it all, and after a trio of dominant victories over Evan Tanner, Elvis Sinosic, and Vladimir Matyushenko, there was no bigger star in the UFC, and he grabbed on to the spotlight with both hands.

“I think he’s dealing with it really well,” said White of Ortiz’s ability to handle everything that was thrown at him at the time.  “The most pressure for him was the Evan Tanner fight.  He had a lot of pressure on him.  We had just taken over, it was the beginning of the type of walk-ins that we do now, and that was the biggest crowd any of them had ever played in front of, 5,000 people at the Taj Mahal.  And there was a lot of pressure on Tito coming into UFC 33 at Mandalay Bay too.  Those were the two biggest pressure fights for him.”

The biggest was yet to come though, and when UFC pioneer Ken Shamrock was brought back to the UFC for what ended up being the biggest event in company history up to that point, it was Ortiz’ time to shine before a bigger audience than ever for both MMA and himself.

And while the fight was the age old clash between flashy upstart and old lion looking to teach his foe some new tricks, what no one realized when it came to Ortiz was that for all the pomp and circumstance around him, he was also one of the hardest workers in the game. One of my most lasting Ortiz memories was watching him working with his then-boxing coach Don House in a hotel ballroom before a card he wasn’t even fighting on, pounding the mitts and doing torturous conditioning drills that left him exhausted at the bell ending the rounds.  Ortiz would then take a sip of water, stagger over to a nearby trash can and throw up, and wave House in for the next round. As BB King would have said it, he was ‘paying the cost to be the boss,’ and on November 22, 2002, he was the boss, delivering on the biggest night of his life by stopping Shamrock in three rounds.

“There were so many people saying how close the fight was gonna be, and that Ken was really tough and strong,” he told me in 2003. “They were just saying so much stuff and giving him so much credit that they didn’t realize how hard I worked and how good I became. At UFC 40 people saw a whole different side of mixed martial arts. They said, ‘man, you really dominated. You picked him apart.’ If he wanted to be the champ, he had to earn it. That night he sure wasn’t going to be the champ and he was not going to earn it because of all the work I put into it.”

Tito Ortiz was on top of the world. He was the UFC light heavyweight champion, the “face” of the growing sport of mixed martial arts, and on the verge of becoming the sport’s first crossover star. But there were rumblings in the kingdom, and two men just as hungry for Ortiz’ belt – Randy Couture and Chuck Liddell – were about to storm the castle.

Next Wednesday, the Ortiz chronicles conclude on UFC.com…to read Part One, click here