The Ortiz Chronicles - The Early Years

Before his final fight against Forrest Griffin at UFC 148 on July 7, we take a look back at Tito Ortiz’ Hall of Fame career in a three-part series. 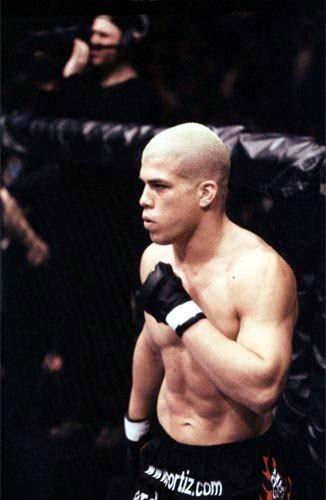 The first time I spoke to Tito Ortiz in 2000, he was days away from the first defense of his UFC light heavyweight title against Yuki Kondo, and he talked about he and his then-wife buying a new bed and computer and laughing at how far this whole mixed martial arts thing had come for him.

For the young guns in the sport who are now making significant paydays while being able to train and fight full-time, a new bed and computer have been replaced by new homes and cars, a far cry from the lean years before Zuffa arrived in 2001 and The Ultimate Fighter kicked off the MMA explosion four years later. It was during these times that fighters like Ortiz kept the game alive, and 12 years after that first chat, the man once known as “The Huntington Beach Bad Boy” is now “The People’s Champ” and about to be inducted into the UFC Hall of Fame before his last fight on July 7th against Forrest Griffin.

It’s been an unlikely ride for Ortiz, who, like most future fighters and fans, was captivated by a 1993 viewing of the first UFC event shortly after graduating high school

“I watched the Ultimate Fighting Championship and I was like, ‘these guys are crazy,’” he said in 2003.  “I just couldn’t believe the stuff they were doing inside the Octagon.  I was a huge fan of the movie ‘Bloodsport’ and thought, ‘wow, it finally came to America.’  It kinda surprised me.  I watched a smaller man choke out bigger men left and right, and that was Royce Gracie.  He introduced Jiu-Jitsu to the United States, and it was amazing.  I didn’t understand some of the stuff he was doing, and being a high school wrestler, when me and my friends would roll around, we would try and do the Jiu-Jitsu stuff.  We really didn’t understand what it was, but it caught my eye really quick.”

That didn’t mean he was going to fight, though. The way Ortiz saw his life panning out, he was going to wrestle in college, maybe take a run at the Olympics, and then go back to coach high school wrestling. He did wrestle in college, but once he began training with the UFC’s bad boy, David “Tank” Abbott, he began to sway toward mixed martial arts.

Ortiz was a quick study in the sport, but he really wasn’t interested in giving up 50 or more pounds to some of the behemoths in a UFC with no weight classes. But when the UFC implemented a division for fighters under 200 pounds, Ortiz’ interest was piqued.

“They made the weight class of lightweight, which was 199 pounds, and that was my weight class in wrestling,” he said. “So there was the factor of, ‘hey, these guys are my size now.’  Now it was all about learning the techniques.  I knew how to wrestle really well; I was still a little wet behind the ears when it came to boxing, but I learned a little bit through Tank and Jesse Reid.  So when they came up with the weight class, I was like, ‘I think I can do this.  I want to try this.’  I watched Jerry Bohlander fight, and he was choking guys with weak chokes.  I wondered if guys were really that weak at this weight.  So I asked Tank if he thought he could get me into the UFC.  He made a couple of calls and said, ‘I’ve got this young kid, he’s really, really tough.  He’s a 199 pounder and I think he’ll do really well.’”

That’s how life was in the world of MMA at that time. Ortiz didn’t have any amateur experience and didn’t have a stellar college wrestling background. In fact, he had quit school and was simply trying to make ends meet.

“At that time I was working at an adult novelty store (laughs), and I had just quit college,” he said in 2006. “I was wondering what I was gonna eat the next day because I was so broke.  I was living in a small apartment, not really sure of what life was gonna bring to me.  I started training and I got the chance to fight in the UFC.”

On May 30, 1997, the man who has fought more times in the UFC than anyone else made his Octagon debut against Wes Albritton. The fight lasted just 31 seconds, but Ortiz’ anxiety about the fight lasted a lot longer.

“I was scared,” he told me in 2003.  “I was really intimidated and I wasn’t sure exactly what could happen.  He was a second degree black belt in Karate and I really wasn’t sure what to expect.  I still saw it as a competition.  What do I need to do to become the victor in my fight?  Well, he was a standup fighter and I’m a ground fighter, so I used my wrestling to my best ability.”

The quick TKO finish thrilled Ortiz , but there was little time for celebration, as later that night he met rising star Guy Mezger in his second UFC 13 bout. This one didn’t go as well, as he was submitted by a guillotine choke in three minutes after a strong start that almost saw him pull off the win before a referee stoppage to check on a cut inflicted on Mezger. At the time, Ortiz thought he won the fight, but he was waved back into action moments later. He assumed he would just pick up where he left off. The crafty Mezger had other plans.

“By then my cockiness really kicked in and I thought, ‘I’m just gonna take this guy down and do what I just did,’” said Ortiz. “But you’ve got to remember about the submissions and guard yourself at all times.  So I shot in and he caught me with the guillotine.  I had never seen that before in my life.  I tried to pull out and get away, and everything got real tight.  It got really black really quick, and I was like, ‘Okay, it’s time to tap out now.’  I was really young and I was only trying to do the sport for four months at the most.  I was a green fighter.”

True, but he was also a fast learner and a tireless worker. He would never be a Mike Tyson with his standup or a Royce Gracie with his submissions, but he could ground and pound opponents like no one since Mark Coleman introduced the technique to the UFC, his submission game became not only serviceable, but vastly underrated, and his chin and heart were unquestioned. The only thing missing was his soon to be legendary cardio.

“I noticed that people need a lot of technique,” he said in 2000. “In ultimate fighting, you need to be an ultimate fighter by putting everything together. All of a sudden I started seeing guys who were winning belts and becoming champions, and they had everything in their game.  They had the ground game, the standup, the cardio, and so I said, ‘I’ve got to take this sport seriously.’”

He did, beating two Lions Den members back to back in 1999 – first Bohlander and then Mezger in their UFC 19 rematch. The rematch with Mezger was best remembered for launching the feud between Ortiz and Ken Shamrock, but the soon to be pressing business for the rising star from Huntington Beach was Shamrock’s brother, UFC champ Frank Shamrock. In September of 2009, the two met in the main event of UFC 22, and what followed was the best fight of the pre-Zuffa era, as the two went to war for three rounds where it was safe to say that either man had a good chance of eventually pulling the fight out.  By the fourth round though, Ortiz was losing steam and his conditioning betrayed him, as Shamrock pounced and stopped him. Beaten for the first time, Ortiz vowed never to let his cardio dictate the result of a fight again.

“Just competing against a five-time defending champion the way I did, I almost beat him, and I almost brought what it took to be the champion,” he said in 2003. “I was completely hooked then.  In my mind, losing to somebody was the worst thing that could ever happen.  It was worse than the Guy Mezger loss; it was the worst loss I ever had.  But I learned how to push myself to the limits, and I’ve got to thank Frank Shamrock.  He helped me to become the champion I am today because after losing to him I never wanted to lose again.”

For four years, Ortiz wouldn’t experience the bitter taste of defeat, and in that time, he went from a kid struggling to pay the bills to the biggest star in a sport on the verge of a breakthrough. But to get there, he had to strap a UFC championship belt around his waist. A Brazilian named Wanderlei Silva had the same idea.

On Thursday, the Ortiz chronicles continue on UFC.com…