The main goal of the fight game is a simple one. Hit and don’t get hit. Add in the ground game, and it’s a similar premise, something along the lines of get your opponent before he gets you. And with a Gracie jiu-jitsu black belt, Brian Ortega usually has his way when a fight hits the mat.

Yet despite an unbeaten pro record that includes four UFC victories, all of which have ended before the final horn, there’s the distinct feeling that when the 26-year-old is in the Octagon, he is more than willing to take himself out of his game plan to test himself in dangerous situations.

He doesn’t deny it, either.

“You always question yourself and you wonder,” Ortega said. “‘If I could take a fight right now, it could be an easy night, and obviously you want that. But then sometimes you’re in a fight and I guess it’s like the inner warrior in me comes out.”

Ortega has the technique to make life a little easier, and before making his Octagon debut in 2014, he showed off the chops to get the job done in rapid-fire fashion. But as he points out, in the UFC, every fight has the potential to take him into deep water.

“Some fights I’ve walked right in there and walked right out, but the UFC has the hardest people ever, so it’s not like you’re just going to walk right in and walk right out without a scratch. These guys are highly-trained individuals who are out there to take you out on that night.”
MORE FROM FRESNO: Cub Planning Beautiful Destruction | Ortega Fears No Man | Moraes Wants to Fight the Best

One of those guys is Cub Swanson, the perennial featherweight contender who is tasked with the assignment of handing Ortega his first pro loss this Saturday in the UFC Fresno main event. With his skill and experience, Swanson isn’t the type of opponent a fighter wants to go out of the comfort zone with, but Ortega is honest enough to say that while his intentions are to go about chasing victory in the smartest way possible, he can’t promise that he won’t go to those dark places if the opportunity presents itself.

“My will is pretty strong,” he said. “But there comes a point when you can feel that you’re outclassed, and that’s when you have to switch the plan. I haven’t felt that way yet. I always felt like maybe this guy is throwing his punches a little faster, but they’re not doing much, and I’m getting to him. As a fighter, obviously I believe in myself, and when I’m in there, it’s different. Something takes over and I can’t really explain it. I don’t want to go to war, but when I’m in there, I just go to war.”

In Fight of the Night wins over Thiago Tavares and Renato Moicano, Ortega eagerly embraced the type of battle that many used to believe high-level jiu-jitsu players couldn’t engage in. But times have changed, and in a lot of ways, Ortega represents the evolution of the Gracie Fighter.

“Time has evolved so much and so fast in the last 20 years that you have to be well rounded, no matter what,” he said. “My boxing coach (James Luhrsen) figured that out early and he was like, ‘You know what kid, you’re great on the ground, but there’s gonna come a point when you won’t be able to take someone down.’ We’ve seen in all kinds of fights when unsuccessful jiu-jitsu practitioners try to take the fight to the ground but are unable to, and they end up losing on their feet or getting knocked out. I didn’t want to be in that situation. So from an early point, I trained standup, so in case a situation did come up, I’m not in unknown territory.” 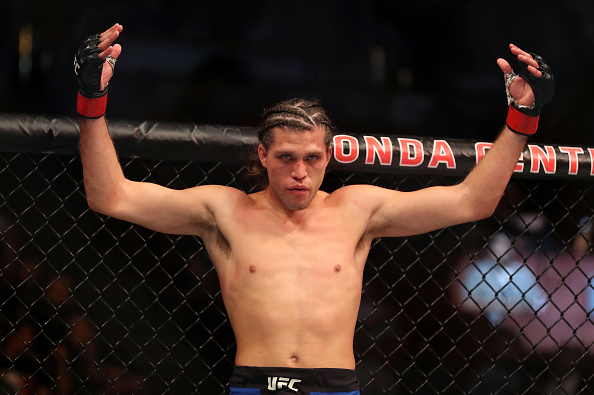 There will be a lot of situations for Ortega to deal with against a fighter like Swanson. Some will feel like second nature, others will be foreign to him. But like anyone who loves the challenge of martial arts, Ortega will embrace them all and do his best to figure them out. It’s what he does every day – not just in the gym, but in a fight – and he feels like this is still just the beginning.

“Every single fight I keep training harder and keep trying to evolve and I feel like I’m barely getting started in the game,” he said. “So I’m excited for the future as a martial artist.”

Hearing Ortega’s approach to his sport, I wonder that if there was no such thing as professional mixed martial arts, would he still find a way to find a fight, a way to test himself in a manner nothing else could?

“That’s a fun question,” he laughs. “It’s bit of a yes and no. I always love testing myself and I love fighting, but at this point I’m a little bit older and I’m starting to mature and see the bigger picture. My whole goal is that I want to be all right when I’m 45-55 years old. I want to be able to fully function with my body and train and help my kids out. So is the risk worth the reward? But right now, I’m not gonna lie. I’d probably sneak away from everyone and do one of those fights. And I wouldn’t tell anyone about it. And if they asked about it, I’d just say I got in a bar fight. I would be that guy who sneaks off in the middle of the night.”