In his first UFC main event, Brian Ortega made his case for inclusion in the featherweight title picture, as he kept his unbeaten record intact with a second-round submission of veteran contender Cub Swanson at Save Mart Center in Fresno.

The win was Ortega’s fifth in the UFC, with each of those victories coming by way of knockout or submission. After the bout, he didn’t call for an immediate title shot, but instead spoke of doing charity work, introduced his father to the crowd and said he will respectfully take his place in line for a future championship fight should Frankie Edgar get the next shot at champion Max Holloway. 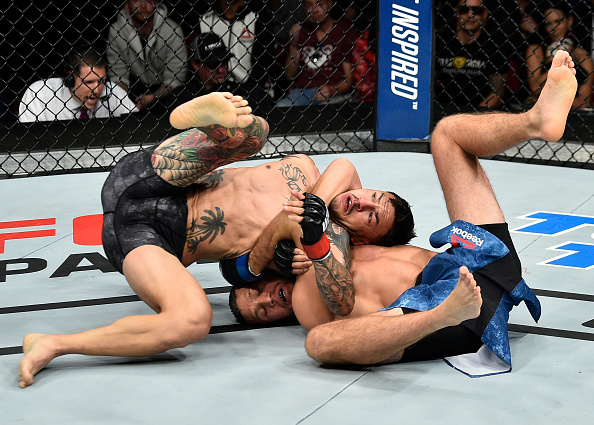 It was a humble display from the 26-year-old after a memorable win on the most pressure-filled stage of his career.

The fighters traded kicks in the early going as a way of getting acquainted before a quick exchange in the second minute of the fight. Midway through the round, both started throwing more punches, getting a rise out of the crowd though neither fighter was able to put the other in any trouble. Swanson was starting to put some body punches in the bank, but out of nowhere, when the two locked up in the closing seconds, Ortega sunk in a tight choke that might have ended the fight if the horn didn’t intervene.

Swanson kept digging to the body in round two, but Ortega kept marching forward, now eager to implement his grappling game. With two minutes left, Ortega went all-in for another submission, and this time, he got it, as he locked in a guillotine choke and jumped guard. Swanson tried his best to get free, but it was not happening, forcing the veteran to tap out. The official time of the finish was 3:22.